When a session in South Sumatra reminds you of your mortality.

The lockdown in South Sumatra has continued. To keep busy, I’ve mostly been surfing at Ujung Bocur. A fickle left-hand point break that is a little bit different every time you paddle out. It’s exposed to the swell and can get quite sizey. That said, the wave doesn’t usually break top to bottom. The hold-downs can be both long and arduous, but they aren’t really scary. However, there are a few other waves in the area that are another matter entirely.

Our first trip up to Jimmy’s was a few weeks back. The journey there follows a coastal road that winds between rice paddies then up through foothills green with tropical vegetation. There were butterflies of a tropical variety fluttering around in my stomach during the drive. I had surfed Jimmy’s on a previous trip and had mixed feelings about the experience. My most vivid memories involved watching fingers of sharp reef drain as I paddled out. Then spending most of the session dodging massive clean-up sets, as they came periodically steaming from the deep blue yonder.

Conditions appeared more approachable this time around. The waves were smaller, but still had that raw open ocean feel. There was more water on the reef, but the end section still closed out with an unpredictable regularity, shutting down like a warped industrial clamp buckled from overuse. 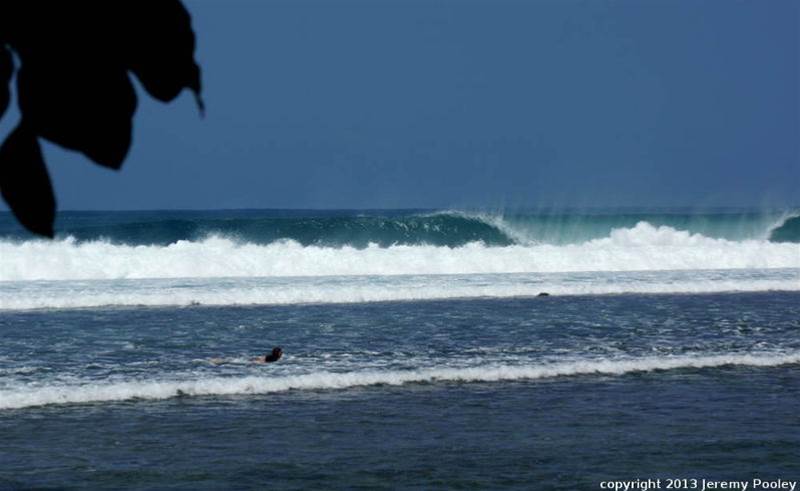 The sets were pushing double overhead, which isn’t particularly big, but the waves came lurching out of deep water. Despite the light offshore wind, there was a constant bump and wobble, which made every take off tricky. No two waves were the same. Some would stand up and close out, leaving you to deal with an avalanche of white water before being rag dolled in over the reef. Some would go all fat, and some would barrel perfectly, all the way through to the channel. Picking the right one was the key, but being in the right spot to get into them felt like rolling the dice at a casino.

We surfed for almost three hours and did have to dodge a few larger sets. There were occasional frenzied paddles for the shoulder as wide walls of ocean chased us towards the channel. Just as I was beginning to feel that familiar dull ache of tiredness across the shoulders, the horizon darkened. A set way bigger than anything we had seen before came lumbering out of the depths. The lineup scattered like a small flock of frightened seagulls. A few brave souls made a belated dash for deep water. I accepted my fate, ditched my board, and prepared to test my lung capacity. Just as I was about to dive, I glanced upwards. A hulking slab of menacing dark water stood tall above. Then the lipped pitched like it had the full weight of the Indian Ocean behind it. I ended up getting dragged right in over the reef, and was still trying to get my breath back as I starfished into the shallows.

The waves backed off for a week or two, and the long cruisy walls at Ujung Bocur gradually nursed my shaky self-confidence back to semblance of its normal self. As the swell charts lit up again, there was talk of a trip south to Way Jambu. Apparently, the wave was also known as the Sumatran Pipeline. I’ve never been to Hawaii, but standing on the shore in the early morning, nervously watching the horizon, I could definitely see the resemblance. The wave looked both heavy and hollow, but many of the sections didn’t really seem that makeable.

A huge set rolled through just as I was paddling out. I stared in disbelief as the first wave capped way out the back. As it thundered down the reef, I actually thought the setup looked a lot more like Cloudbreak. Or maybe Cloudbreak’s drunk angry sister. The one that appears attractive enough until she gets stuck into the cask wine. There was absolutely nothing mechanical about the wave. Every wall of ocean hit the reef a little bit differently, throwing wide heavy lips that buckled and bent before exploding into huge plumes of whitewater. I sat in the channel and could feel my newly minted self-confidence gradually ebbing away. The tropical butterflies returned and were soon doing circle work in my stomach. It was going to be another testing session.

I ended up sitting just down from the main peak. The wide ones seemed to have better shape and didn’t close out as much. I found a few small barrels that mostly had an exit. When one pinched, I was shoved down into the reef. It felt lumpy and uneven, and would no doubt do a nice cheese grater impersonation if you hit it at real speed.

The dropping tide eventually provided a nice excuse to head back to shore. I was still being haunted by self-doubt as I hit the sand. I had surfed bigger waves in the past and been completely comfortable. But on those occasions, the setups were far more predictable and a deep channel was never too far away. In a difficult moment of self-reflection, I realized that it’s much easier to take on the big stuff when conditions are perfect and a clean exit is beckoning just a bit further down the line. 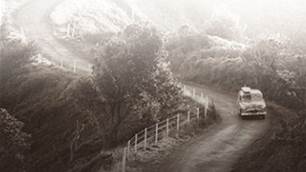 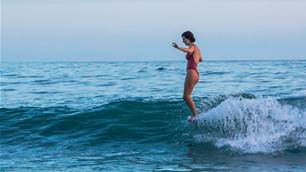