Meanwhile Gabriel Medina continues to power through the draw.

Excellent conditions continued today Lower Trestles and the world’s best surfers delivered a third consecutive day of exciting action at the Hurley Pro and Swatch Women’s Pro, stops No. 8 and 7 respectively on the Samsung Galaxy World Surf League (WSL) Championship Tour (CT). The day saw a series of close match-ups as surfers fought to avoid elimination in Round 3 of the Hurley Pro followed by big scores and impressive performances in Round 3 of the Swatch Women’s Pro.

The Brazilians dominated Round 3 of the Hurley Pro today starting with Miguel Pupo eliminating current No. 4 on the Jeep Leaderboard, Julian Wilson, while Italo Ferreira, Filipe Toledo, Wiggolly Dantas, Adriano de Souza and Gabriel Medina also won through their match-ups to advance on to Round 4.

The aerial antics of Filipe Toledo matched-up against the power turns of Michel Bourez in Round 3 Heat 3. An exciting exchange with ten minutes remaining saw each surfer demonstrate their trademark styles. Toledo was rewarded with a near-perfect 9.77, the highest score of the day, while Bourez earned a 7.50 and was eliminated from the event.

“I was out of the water for two weeks after Tahiti with an elbow injury, but after my performance yesterday I’ve definitely got my focus and momentum back,” Toledo said.

After a dominant showing in Round 2 yesterday 2012 World Champion Joel Parkinson continued his superb run of form with another impressive two-wave heat total of 18.63 (out of a possible 20), the highest of the Hurley Pro today. Parkinson defeated current world No. 8 and compatriot Josh Kerr, who leaves the contest in equal 13th place.

“I think yesterday was the turning point for me this year,” said Parkinson. “I’m in a good frame of mind now and I just want to keep going. I’m a much better surfer than where I am -- I’m sitting pretty far down the rankings and I don’t feel like I deserve to be there.”

Jeep ratings leader Adriano de Souza took on Glenn Hall in Heat 6. Hall delivered a major upset yesterday when he defeated event favorite John John Florence in Round 2 but he wasn’t able to replicate that performance today. De Souza held a slim lead at the end of the heat and, despite a last-minute attempt from Hall, the Brazilian advances on in the competition.

“I still need to work on everything - strategy, surfing and ability,” said De Souza. “I never give up and that was one of the hardest heats for me. Glenn is such a dangerous competitor and I didn’t underestimate him.”

“I really want to get on with life and move on after the shark thing,” Fanning said. “I started getting that winning feeling back during J-Bay and I really want that to continue. My surfing feels really good at the moment and I’ve got a World Title in mind -- that’s what I’m aiming for.”

11-time WSL Champion Kelly Slater secured his place in Round 4 with a decisive victory over Adam Melling in Heat 10. Slater, a six-time Trestles winner, won the heat thanks to two excellent 8-point rides and will face Gabriel Medina, Owen Wright in a stacked Round 4 match-up when competition resumes.

“It’s not a normal swell so it’s hard to be in the right place and we missed the best waves in that heat,” Slater said. “Adam needed a high nine at the end of the end so I wasn’t too worried.”

Reigning WSL Champion Gabriel Medina was the last of the Brazilians to compete today and win through Round 3, defeating Bede Durbidge in Heat 11. An 8.83 from Medina on his fourth wave for a huge frontside air put Durbidge in a combination situation. The Australian managed to escape the combination but couldn’t catch Medina and leaves Lower Trestles in equal 13th place.

“Today it’s a bit tricky and that was a tough heat,” Medina said. “Bede surfs really well so I’m stoked to make it through. Round 3 is difficult so I just tried to focus on my own game."

The final heat of Round 3 between Owen Wright and Fredrick Patacchia did not surf. Wright advances directly to Round 4 following Patacchia’s withdrawal from the Hurley Pro.

Bianca Buitendag, currently in 4th place on the Jeep Leaderboard, was first to claim a place in the Quarterfinals of the Swatch Women’s Pro after she got the better of Sage Erickson and Lakey Peterson with a 16.10 two-wave heat total in the opening heat of Round 3.

“I’ve been coming down here early every morning to make sure I get a freesurf in,” Buitendag said. “I think confidence has a lot to do with my success so far this year. I’m gaining experience and that’s really helped me to surf smart.”

Courtney Conlogue, No. 1 on the Jeep Leaderboard, put on an impressive display in her Round 3 heat against Tatiana Weston-Webb and Nikki Van Dijk. The Californian looked unstoppable in the Jeep leader jersey. Two big back-to-back scores from Conlogue left the field in a combination situation and she sails through to the Quarterfinals.

“I do a lot of training in the off-season to make sure I have that power when I’m out in the water,” said Conlogue. “When I was out there today I was just having fun. In these conditions it’s about wave selection and finding the best opportunities.”

Tyler Wright saw a return to form in Round 3 Heat 3 against two-time WSL Champion Carissa Moore and Alessa Quizon. Moore had a strong start and took an early lead but Wright answered with three big turns for a near-perfect 9.57, the highest score of the Swatch Women’s Pro today, and forced a lead change. Wright and Moore were locked in a tight battle for the rest of the heat with the lead going back and forth between the two. As the buzzer sounded it was Wright who claimed her place in the Quarterfinals thanks to another nine-point ride.

“That heat was dreamy -- the waves were so consistent as well as powerful,” said Wright. “The start of the year was a bit weird for me but I feel like I’m starting to piece it together now. It’s so great to have my brother Owen here and I’ve learnt so much from him.”

Dimity Stoyle, Sally Fitzgibbons and Johanne Defay rounded out the day’s competition with Heat 4 of Round 3. Stoyle claimed an early 7.00 and then stayed patient until the end of the heat, when she found a back up 6.87 to eclipse the field. Stoyle heads directly to the Quarterfinals for the first time this year while Fitzgibbons and Defay are sent to Round 4.

“I’m so excited to surf out here and we’re just so lucky,” said Stoyle. “It’s such a dream because the waves are perfect. It’s been amazing to work with Tanner Gudauskas -- he’s such a good coach and he’s been giving me all the local secrets so I go out there feeling really comfortable.” 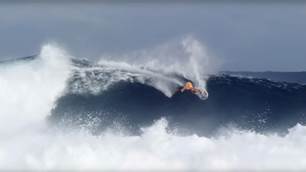