Around about this time last year, Matt Wilkinson was watching pole position slip through his fingers. His sudden ascension to the number one position took everyone by surprise, none more so that the man himself.

Let’s go back to the win in Fiji, what do you take away from a win as opposed to a loss?
You take a lot of confidence from it, getting to surf so many heats is a rarity so it’s the best experience you’ll ever get in as much as it gives you a lot of heats that you can go back and analyse.Now it’s just a matter of sitting back and seeing what looks good and what looks bad.

And what have you deduced so far?
The whole final day was different, in the heat against Julian Wilson, I started off with three really good waves and had to hold out for the last bit and be smart and not let the leader head get to me.
The very next heat with Michel Bourez I was on the ropes with twenty minutes to go and needed to get a score on a pretty average wave, and that’s as much pressure as you’re going to get in a heat so to go from both extremes in the space of a day it was good to know that I can handle that. In the final I needed a score right at the end and I managed to wait and pick a wave that I knew I could get the score on. So it’s nice to know I’ve got that side of things under control.

What was going through your head paddling into that final wave against Michel?
There’s about five billion things to be honest. If the wave is borderline to getting the score you’ve got to push every turn but then of course there’s that risk of falling so you have to weigh everything up and decide if you’re going to have to surf outside your skin to get the score.I guess on that one though, I was trying not to fall off and look silly (giggles). 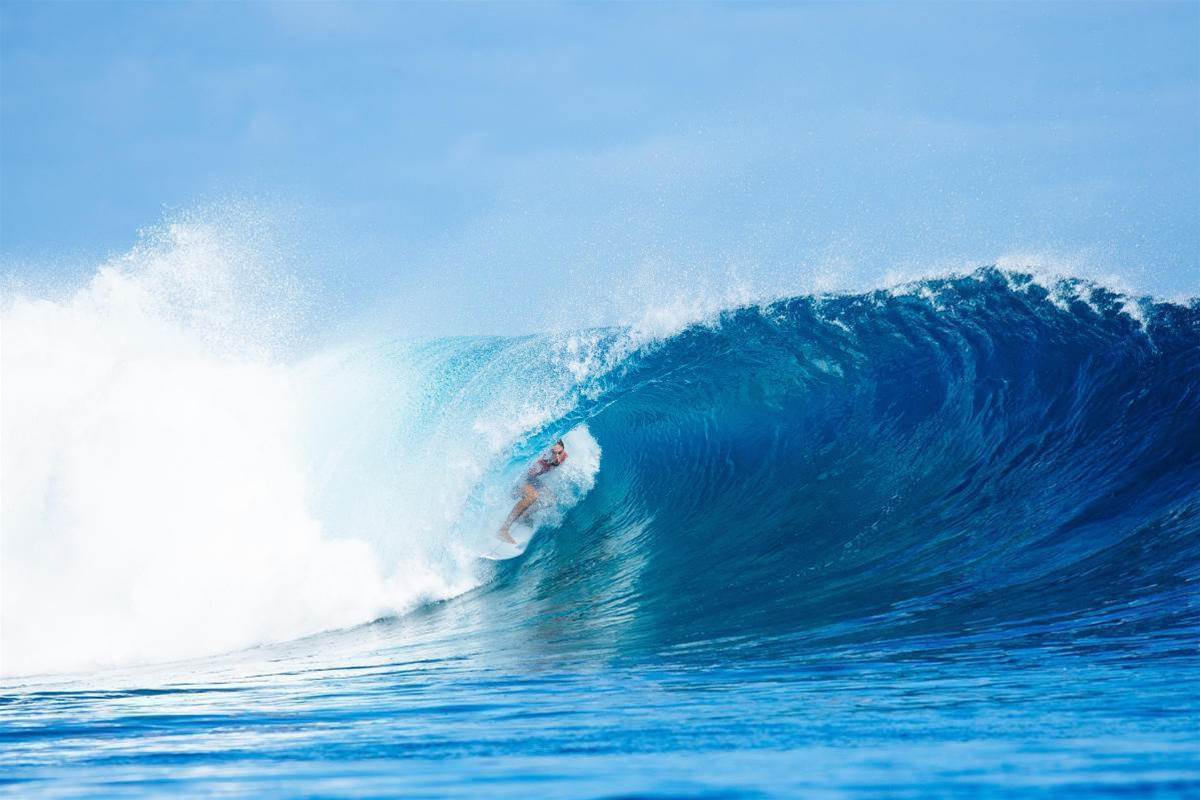 It was an interesting event in that all the heavy hitters were knocked out early yet the rookies really stepped up to the plate.
For sure, Micro (coach, Glen ‘Micro’ Hall) and I were talking about that before the event, in that, Fiji is usually a wave were more experienced guys do well and for pretty much for all the most experienced guys to fall out before round two it was impressive and kinda good for me at the same time. But to see the rookies on tour just come out so hard and a wave that is pretty intimidating with a bit of size, and be beating all those top guys at the same time was something to see.

What about the psychology of that yellow jersey? You had it for a while at the beginning of last year and watched it slip away, what’s it feel like to wear it this time around?
Last year it was just a whirl wind I had no idea it was coming, I honestly didn’t feel like there was any chance I could keep it and was kinda freaking out even though I was pretty excited to just be in that position. This time-because I had such a strong year last year and now starting this year with a few big results it feels like I’m definitely more in my comfort zone.  Having said that, obviously right now the top five are so close together it’s a pretty scary zone to be in.

And those comment sections online, do you pay much attention to what’s being written about you? It’s gets pretty nasty out there?
Nah, I don’t really look what everyone is saying, last year I let it get to me and it was a crazy situation to be in for the first time but now I feel pretty comfortable being up here and I’m ready to push as hard as I can.

So J-Bay is next then it’s off to Teahupoo. Sounds kinda good on paper but how does the prospect of competing at giant Chopes play with your sleeping habits?
Oh definitely, I was just in a wetsuit meeting here at Rip Curl and I was talking about floatation vests that you can paddle with (chuckles). I mean it’s always in the back of your mind that you could end up having a crazy day or event out there but then it might be two foot and the sacredness is for nothing. It’s just a matter of getting as ready as you can and dealing with what’s in front of you.

The Wave Wilko would like to forget from J-bay last year.

Does the approach change from wave to wave?
Yes and no, I mean this whole leg (Fiji, J-Bay, Tahiti) is the power leg of the tour and for the most part they’re the best waves on tour. I’ve just been concentrating on going right again (chuckles) so I’m good to go when it kicks off.

And your final against Owen Wright at the Quiksilver Pro, it’s going back a bit but what are your recollections of that day?
That was pretty unbelievable, crazy day.  I was surfing with Owen a lot before the event I was a bit uncertain and he was a but uncertain and it was all a bit weird to go into the event so to see him come out, smash it and ultimately win it was a pretty wild experience. I balled my eyes out in that final, I mean don’t get me wrong I was trying pretty hard for him not to win and I was devastated to lose, but how could you not be happy for the fella? 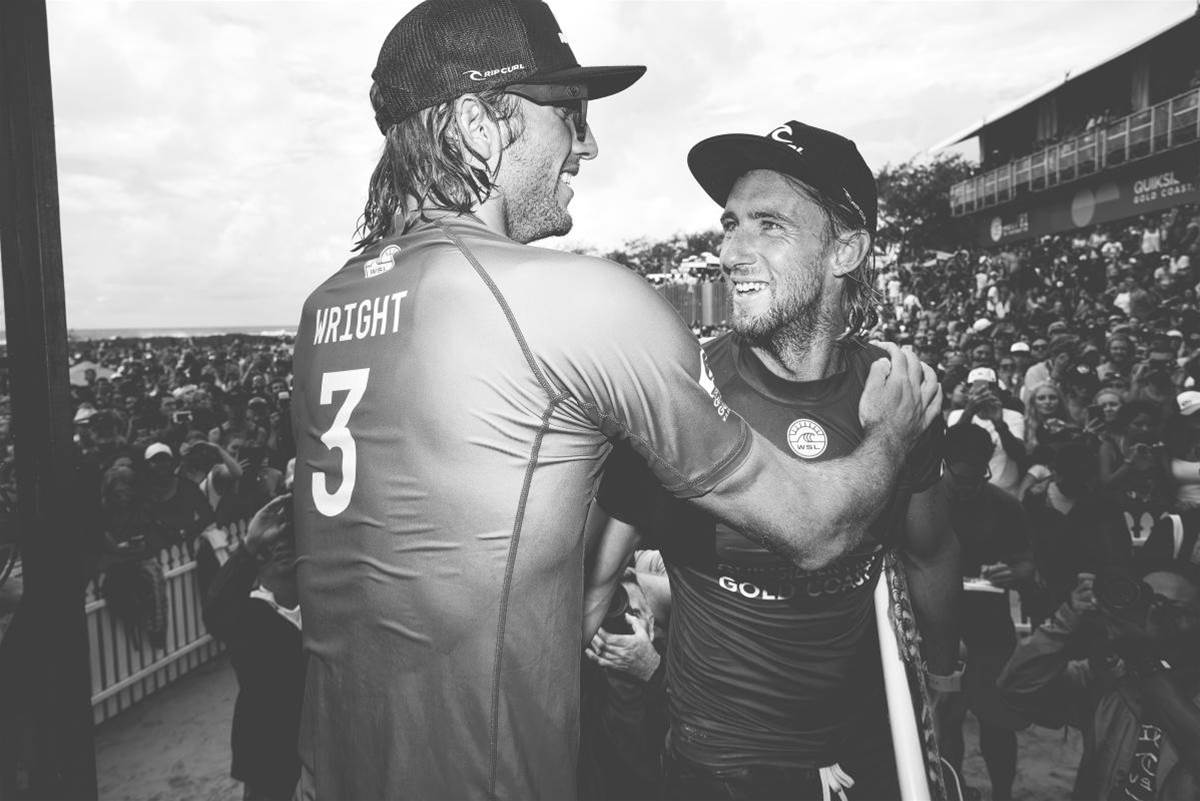 Owen and Wilko enjoying a goofy embrace after the final of this year's Quiksilver Pro. Photo: WSL/Cestari