An open letter to a surfer whom I wronged.

Among all of the epic clips that have come from Cyclone Oma, it's safe to say that this one of underground charger @lachierombouts is by far the most stylish 🤯 🎥: @owenmilnemedia | @mysurftv

There comes a time in most surfer’s lives when they have to put up their hand and say, ‘Sorry c**t, I f**ked up.

If we’re honest it will be more than once. And I am honest and fallible, so I make a point of apologising when I get in people’s way or do something idiotic that inconveniences or endangers. The video you see above is one occasion where I didn’t apologise. So I’m gonna do it now, publicly.

Obscured from frame in this clip of Lachie Rombouts is me, the two-time gold cone piece award winning surf journalist, floundering in the impact zone, in precisely the spot Lachie needed to be to thread a few more sections of dreamy Kirra drainer.

In my defence I’d done two or more hours on the Kirra treadmill by this point. I’d also just caught a wave, straightened out (or fallen off. I can’t remember) and worn half a dozen set waves on the head. Completely rooted, I had the best seat in the house to watch Lachie wiggle his rhino chaser down the point on this thing.

Having done so much work to get THE VISAGE at the top of the point, I could see him eyeing off the next section, ready to high-line his ten foot Rhino Chaser and set a course for maximum VISION. But alas, a barely conscious lump of pinkish, screaming flesh lay in his way.

We locked eyes. Lachie’s expression was blank, calm and resigned. Had he continued he could have cut me in half and still made a few more sections. But he took the noble route, the straight route, and spared my life. For that I am grateful and apologetic:

Lachie Rombouts, I fucked a mental pit for ya and I am sorry.

As soon as I realised what I’d done the shame ballooned inside of me. It only compounded over the coming days when I saw the wave broadcast across the World Surf League’s (WSL) social media channels. To my horror, as I scrolled the comments I could see Lachie getting torched by the hordes of pea-brained keyboard warriors for not getting deep enough. I felt sick. Maybe death by rhino chaser in the bowels of a Kirra pit would have been a more honourable way to go.

Had the cyber-trolls been out there that day - rather than behind a computer moving their hand between Red Tube, a packet Cheezels and a blistered prong - they’d have seen some of the most creative tube wrangling that’s ever been wrangled.

Guy was manoeuvring a ten foot rhino chaser through six-by-four foot Kirra cement mixers - a hybrid of the stepping, ledging days of yore and the drawn-out, warp-speed, semi-closeout Kirra of today.  And he was groooooooving it. Keeeeding me?! WOW.

It’s the kind of performance that’s generated serious buzz about Lachie in the surfing underground. Where he fits into the surf industry landscape is hard to say and I suspect irrelevant to him. But there’s definitely an elegance to what he does with a clear connection to classical longboarding - except he’s doing it on six to ten to fifteen foot tubes.

Alls I know is it’s fucking mental to watch. Ideally, not from the impact zone.  ~ Smivvy* 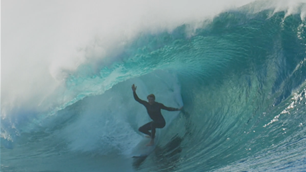 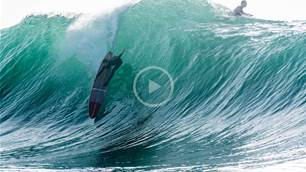 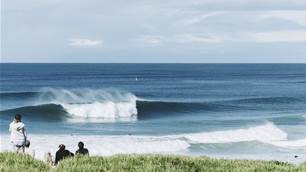