Who gets in your head when you are gunning for the title?

As Gabriel Medina and Julian Wilson chase world title destiny in Portugal they have called upon vastly different individuals to be in their respective corners.

While step dad Charlie is an omnipresent part of Medina’s travelling act, yesterday he sought back up from Brazilian soccer player, Neymar. Dressed in his Laker’s singlet and Nike tracksuit, and boasting plenty of left ear bling, Neymar was seen hanging out with Gabby on the webcast.

As far as sporting stars goes Neymar operates on a different stratosphere to Gabby, however their friendship is well documented and obviously genuine.

Neymar could lose a pro surfer’s salary on a big night at the casino and not blink. He currently earns 36.8 million pounds a year playing for Paris Saint-Germain F.C. That’s over 59 million Australian dollars not including his sizeable endorsements from Nike and other sponsors. To put it in perspective, Medina will take home $100 000 U.S. if he wins the Meo, Rip Curl Pro in Portugal. Neymar makes that almost every time he touches the ball.

It’s a significant moment in Medina’s career. When a world title is at play you don’t want someone in your inner-sanctum who serves as a distraction or negative influence – irrespective of how rich or talented they are. Medina obviously feeds off the energy he gets from being around someone like Neymar.

Eddie Vedder has been Kelly’s celebrity wingman at different times in the past.They even played a gig together once at Waimea Valley. Perhaps Gabby has been kicking a ball around with Neymar to take his mind off the title race. In any case he obviously feels he gets a psychological edge from being in the company of someone who has performed at the highest level in what is far and away the biggest sport in the world.

The other contender in the title race, Julian Wilson, is calling upon coach Andy King for back up. Kingy is a former WQS surfer whose career was cut short when a coward punch damaged his hearing and destroyed his balance. Despite the challenges he’s faced, Kingy regularly wears a smile so broad that it makes everyone else in the world look like they are frowning. His infectious good will is reassuring for any competitor, but he is also one of the most astute observers of the things that matter in pro surfing. 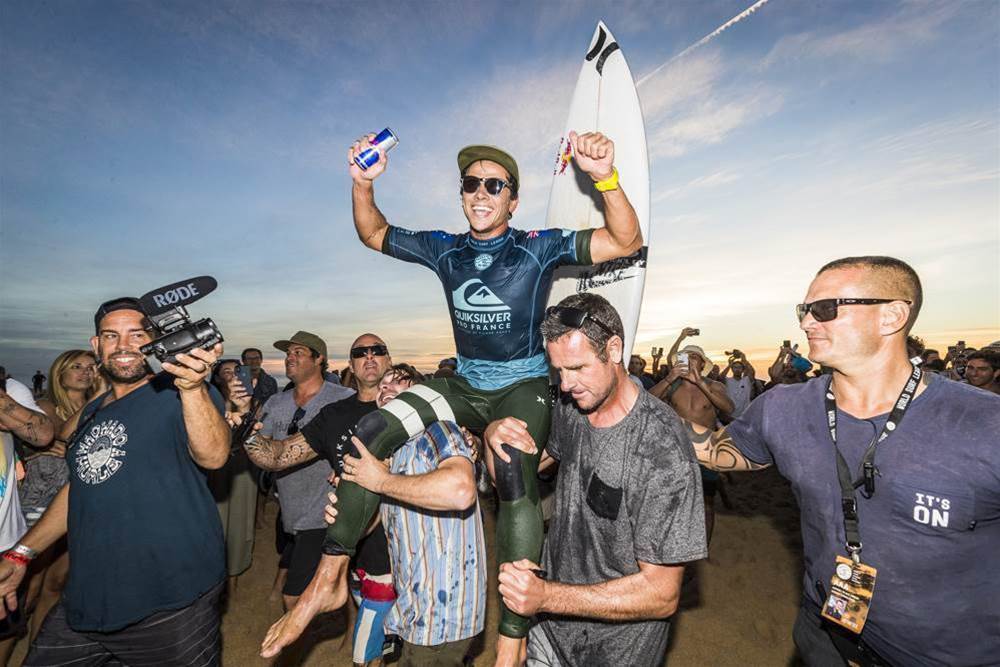 Last night Stryder revealed that Kingy had compiled a colour-coded note-book, which detailed all the potential contest banks at Supertubes and how they varied with fluctuating tides. Surfing heats always has an element of luck, but it seems Kingy and Julian are intent on being aware of as a many relevant factors as possible in their quest to win a world title. In an interview with Tracks earlier this year Julian explained why he convinced Kingy to leave his job as head coach at Surfing Australia  and work exclusively with him. “He’s my wingman. We just have a really good relationship and I’m just wrapped to have him in my corner… He brings a lot of confidence and knowledge and support into the competitive environment, which is what works for me.”

Ultimately, Julian and Gabriel are chiefly responsible for working out the unique alchemy required to win the title – what to think, what to eat, what to ride, which bank, which wave to catch, which manoeuvre to select and all those other little decisions and head noises that suddenly seem more crucial than ever. However, in such a high-pressure scenario, who you allow to get close to you can also prove to be crucial.

If Neymar is not in the stands for the next round you can rest assured he’ll be texting his surfing friend with good will wishes and maybe a few tips for handling the pressure. Meanwhile Kingy will be front and centre on the beach, with notebook in hand and his eyes focused on the shifting sands of the fickle Supertubes lineup – looking for the bank that might just give Julian the edge he needs to ensure we get to see a whole different drama played out at Pipeline.