The making of Clay.

Clay Marzo’s campaign for the title of World’s Best Freesurfer really began a decade ago when the 16-year-old’s break out performance in Young Guns 2 came close to upstaging Dane Reynolds and Kelly Slater. The gecko grip on his board, his uncanny elasticity and tendency to go straight through lips that others avoided, instantly earned Clay a massive following and the image of an enigmatic virtuoso. Houdini-like barrel-escapes from unrideable waves were soon added to his cache of idiosyncratic tricks. While groms fawned over whatever footage of Marzo they could get their hands on, other pros, boat captains and local icons fuelled the Clay folklore with awestruck tales of how he had taken an unfathomable approach to an established location or previously unridden wave.

However, the no-half-measures, high altitude attack took its toll and by 2011 Clay was recovering from two buckled knees and a crisis of confidence. Come 2012 and his personal issues coincided with economic woes for Quiksilver, the sponsor who’d originally backed him on the strength of a roughly cut, half-minute show reel.

When Quiksilver severed ties with Clay, fans openly decried the decision, fearful that the fragile genius would slip away into obscurity without the support of his long-term sponsor. In some respects they were right. Clay embraced his more reclusive instincts, met a girl in Australia and began spending his southern hemisphere winters in the more sparsely populated regions of WA.

Despite the sponsorship downgrade, Clay continued to do some of the best surfing in the world – often on isolated stretches of coast with nobody really watching, which was the way he liked it. However, Clay eventually formed a tight bond with the Kalbarri community, particularly photographer Mike Riley and John Barton, the father of his girlfriend. Supported by a new crop of sponsors Clay, now 26, continues to mystify observers with his wizardry.

The crew most frequently treated to his displays of embryonic barrel riding and incomprehensible lip attack are his Kalbarri brethren. Over the following few pages both they and Mr Marzo himself talk about the various elements that make Clay one of, if not the, best freesurfer in the world. 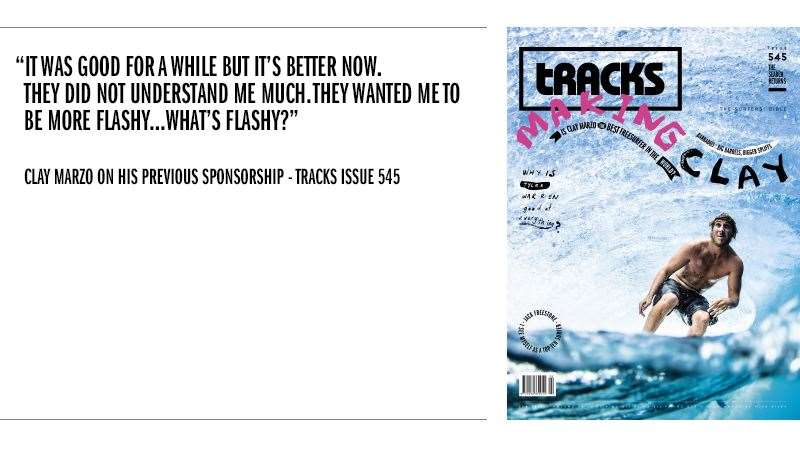