We will find out when he hits the WCT next year.

Every year a new batch of rookies make the CT, and every year the hyperbole button is pressed to talk up their chances. Surf journalists and fans’ eyes will always be drawn to the new, shiny toy in the toy box and each year we get a half dozen or so surfers fresh out of the packet.

Last year you will remember how, especially in Australia, Ethan Ewing was bigged up as not only Australia’s best young surfer, but also as a future World Champion. If that pressure wasn’t enough, so-called experts kept thickly layering on the Andy Irons comparisons, adding both the spectre of one of surfing’s greats, and a dead man, onto the 18-year-old’s shoulders. By the time Tahiti rolled around and Ethan hadn’t won a single heat in his first six events it was clear that despite his talent, he wasn’t emotionally ready for the CT.

This year the next big thing tag has fallen onto Griffin Colapinto. Colapinto is just 19, and like Ewing, has a country’s fading hopes resting on his young shoulders. The USA Mainland has only had Kanoa Igarashi as its sole rookie since Kolohe Andino came on tour in 2012. As such there hasn’t been enough new, CT graduates to replace the talent drain of the Hobgoods, Brett Simpson and Nat Young as CT regulars.

USA and California in particular are always searching for the next Golden Child and in Colapinto they have had a ready-made rookie to pin their hopes on. Just like with Ewing the expectations will be both overhyped and unhelpful. However, unlike with Ethan, Colapinto looks far better equipped to deal with it.

For one, this has been a life long dream. In 2016, Ethan was shocked by his sudden success on his first year on the QS. A three-year plan was accelerated into one and he had less than three months to get his head around traveling the world on the CT having just turned 18. In hindsight taking a year off, ala Taj Burrow, might have been a better option in the long run.

Colapinto on the other hand has been on a carefully planned track since he first had pubes. “We committed to this path when I was 15, and the goal by the time I turned 19 was to be qualified for the CT,” he said recently. “I nailed my goals at Haleiwa, I'm so proud of that, it's a lot to process.” By we, he means his family and sponsors and, more recently, coach Jake Paterson. It’s a tight knit and experienced network, who have maintained stability and wise counsel as his trajectory has risen steadily. However, Griff has always been super clear and forthright about his CT goal. He has no massive ego, nor a willingness to garner attention, more an inner sense of belief. His qualification had a sense of when, not if. It came as no surprise to those that know him. 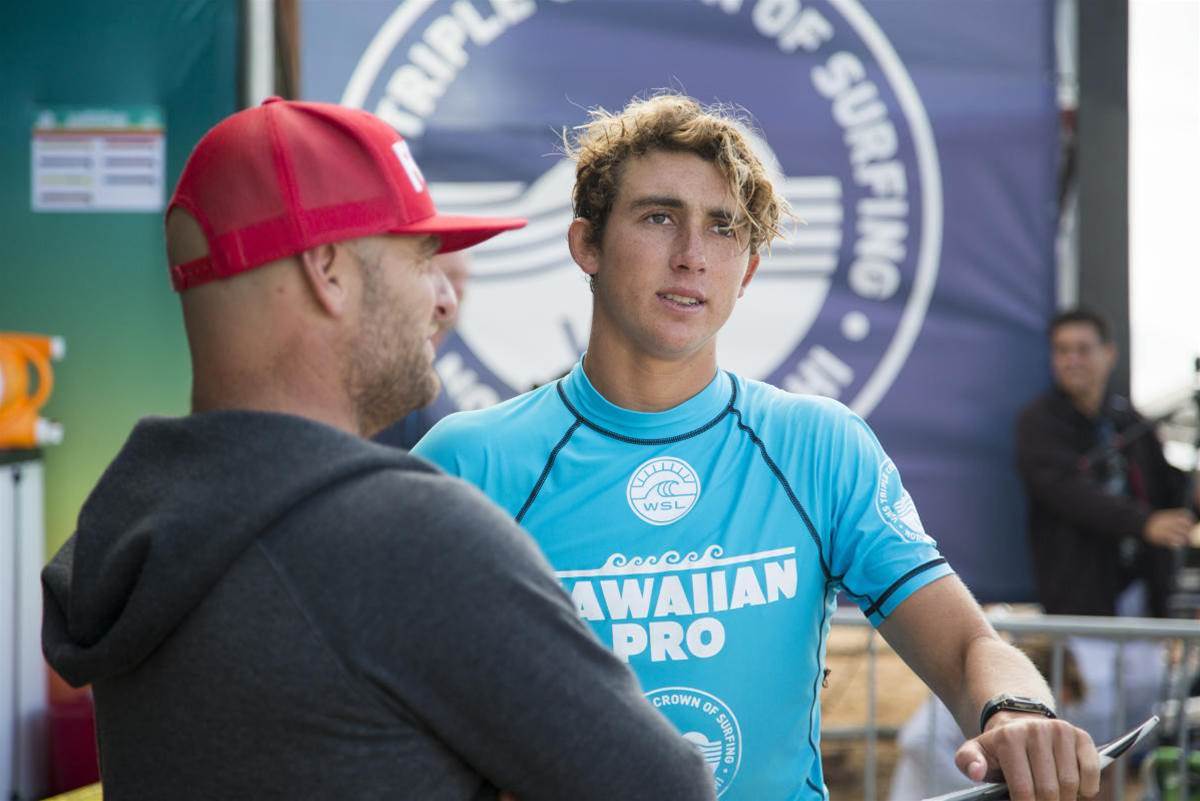 Colapinto’s surfing too is a lot more well-rounded than his age suggests. He has been putting time in at Pipeline since he was 15 and has been steadily gaining respect out there. Along with his Hawaiian mates Seth and Josh Moniz, he’s part of a pack of impressive teenagers that are already comfortable in surfing’s most hallowed arena. There are very few CT rookies in recent times about whom that could be said, let alone at such a young age. With Toledo not surfing Sunset, Colapinto is currently leading the Triple Crown. Assuming Billabong give him a wildcard spot for Pipe, there’s every chance he could be a contender. When you add his super strong rail game and massive punts, here is a fully formed surfer with no obvious technical flaws.

Now while it does sound like I’m already guilty of hyping up the rookie’s chances, in Griffin Colapinto the CT does seems to have the real deal. Now the old hands on the CT have a habit of chewing up expectations and spitting them out (see Ewing, Fioravanti and Lau in 2017), but Colapinto looks to have the tools, and the support, to come into the top flight CT ready. And if nothing else, at least he isn’t being compared to Andy Irons.