Grayson Hinrichs is fast staking a claim as Australia’s top young watermen. The current Under 16 ISA World Junior Surf Champion became a viral sensation a few years back after spearing a giant 16 kilogram Kingfish and dragging it home on his skateboard through the streets of Sydney. He couldn’t understand what all the fuss was about at the time and simply went on with his business of plucking out super-sized Snapper and Kingfish from the bays around his hometown, Bondi.

During a remarkable three day run, recently Grayson went on another tear, becoming the first person we’re aware of to get blown out of a mysto inner-city slab, saving two lives in the space of 15 minutes, and risking his life to land a monster 17 kilogram Kingfish after his reel jammed under water.

Tracks: Wow, that might be the wildest few days on record for an inner-city waterman.

Grayson: Yeah, it was insane, ay. So much action.

Did you ever think in your wildest dreams you’d find a secret spot in the year 2019 in the middle of a city of five million people?

When I was diving I always saw little waves I thought had potential but I never really acted on it. I just had it in mind. Being a city of five million people I got frustrated with the crowd and paddled away to a wave where I saw a couple of waves breaking on the cliffs and thought I may as well have a crack.

Give us the blow-by-blow of the session…

I went out there for three and half to four hours and for the first hour and a half I was by myself. I got probably ten barrels but three of them were super memorable. I was psyching so hard on them. The lifeguards were fanging around on the jet ski and I called them over to see if one of them wanted to come out because they have a board on the ski. They came out and straight away we started getting slabbed together for the first hour. A couple of the other lifeguards joined us and they couldn’t believe their eyes either. They were thinking it was a fake wave and all of a sudden they realised it is actually a real wave and you can get barrelled on it. They were losing it but I was losing it the most.

When did you realise you were onto something pretty special?

I was sitting out there and I got a couple at the start that weren’t much - capuccino over the head kind of stuff. I saw this thing with the biggest section down the line and was like, ‘oh, this thing is gonna slab!’ I just got under the lip in time and I was on the foam ball and got blown out into the channel on my third wave. I claimed it so hard. I couldn’t believe I was getting barrelled by myself in the city!

I couldn’t believe it. I’d been out there three times and stood there with my board watching it for 45 minutes and it was so inconsistent every time I didn’t bother. This time was so consistent. Every few minutes there was a set. It’s really fickle with the tides and it’s got two different reefs when it’s on a certain tide. When it’s perfect tide you get it growing and sucking out kind of like a bommie and you can chip into it and backdoor it. But at other times it breaks on this second reef and it’s a roll-in and you ollie the step and backdoor the slab. So sick.

Have you ever heard of anyone getting barrelled out there?

I’d surfed it once before a couple of years ago on a little foamy and I was saying to my friend I thought it had a bit of potential but I never went back.

What prompted you to give it a shot?

I was surfing xxxx but it was so crowded. It was as good as it gets but so many people and I was just pissed off and I was looking up the point to the secret spot and saw a couple spit. I decided to paddle out and see what happened.

Without giving too much away can you describe the set-up?

It’s out on this little tip and has a really high 40-metre cliff face and a little ledge. It has a roll-in, double-up to it. It’s really shallow but it goes into deep water really quick so it’s manageable.

What about the rocks?

They’re about eight to ten metres away from the cliff. You’ve got a cliff sort of close, but not too close, then you’ve got rocks that stick up on the inside. But the good thing is all the water is dragging out into the channel so even if you fall you get sucked out into the channel before anything happens.

When I was a grom I watched local tube-pig-boog-legend, Dave Drews, paddle out there solo and surf it at six to eight foot during the iconic 2001 July Swell. From memory the direction was a little off though and he didn’t get spat out of any…

I heard that. Was it tubing?

I don’t remember him getting spat out of any but I’m sure he’ll pull me up if he did when I see him again. By my calculations that means you’re the first person on record to get spat out of one there. Does that give you naming rights?

Um, ah, I was always told ages ago when I’d go out on my foamy it was called xxxx and everyone kept it on the down low. Not because it was a sick wave just because it didn’t exist really. I reckon keep it secret. People don’t know what you’re talking about.

Don’t worry man. I’ll take out every identifying factor. It could be anywhere from South Head to Malabar as far as the public know..

I heard you also saved a couple of lives during the swell?

Yeah, the day after. I got up early to try and get another session at the slab but the tide was too high. The waves were solid, not huge, but it was big. Six foot and heavy, full high tide pushing up against these rocks between Bronte and Tama.

A couple Brazilians got stuck. One guy ripped his leash off, so I swam in, pulled him out, swam him around to Bronte and then I got up on the cliffs after just saving that guy and I looked down the cliffs and there was this other guy getting so flogged!

I didn’t know what to do. I just yelled for someone to call the lifeguards and right as I was about to jump off, this wave smashed his face into the barnacles as he was trying to climb up the cliff.

I jumped off the cliff and grabbed him and swam him back around. I was sweet about the first one ‘cos I knew nothing was going to happen but the second one rattled me a bit. Just watching someone actually screaming for their life getting smashed against the rocks was intense. 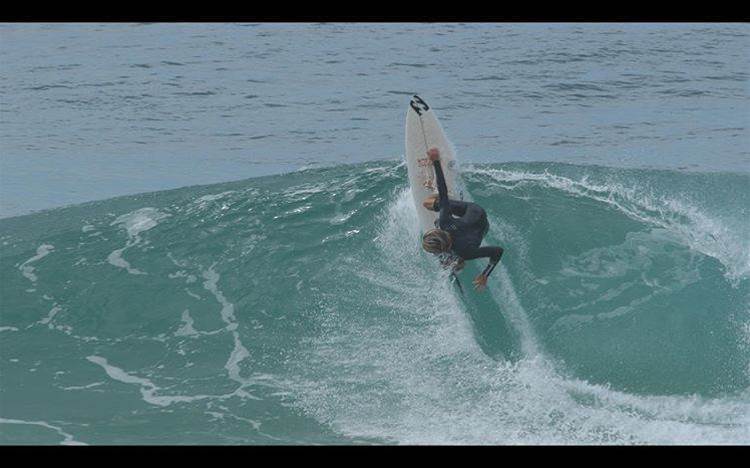 Grayson displaying some of the form that helped make him an ISA World Junior Champion.

And what about that Kingy you speared out the front? That thing was bigger than you!

The day before the swell hit I jumped off the end of my street and was swimming around. There were big swells, it was right as it was coming. I was burley’ing up for Snapper and then these big Kings (Kingfish) came in and I was lucky enough that they turned on me to check me out again and I just popped one. My reel got jammed and I was getting dragged around under water for ages. I was about to let my gear go and I just managed to get a breath on the surface before it pulled me down. I ripped my reel as hard as I could and the line started coming loose again. Scary call on that but I ended up landing it pretty quickly and got it in.

People die trying to land big fish like that, right?

I was just thinking I’m going to sacrifice my gun before my life but that gun has landed me so many dream fish I was really not wanting to let it go. I knew a 17-kilo fish would have to give up pulling down a 60 kilo kid. 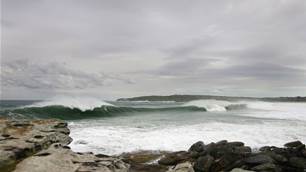 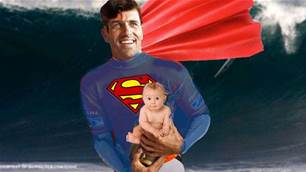 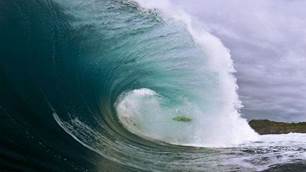