Surfing is banned in Italy, Spain and Portugal. Could it happen in Oz?

#STAYATHOME from Roberto D'amico on Vimeo.

“I live 100 metres from the sea and of course I want to go swimming and surfing, but I can’t even go for a walk,” Italian surfer Roberto D’Amico tells Tracks. “There is financial penalties and even jail terms for breaking the isolation rules. Right now we just have to forget about surfing, or whatever your passion is and think about being healthy.”
D’Amico, a powerfully built natural footer from Ladispoli, a small coastal town about 20 miles from the centre of Rome, is one of Italy’s best surfers. A giant specimen whose hugs can power whole cities, the QS warrior, like all Italians, has been in a COVID Nineteen lockdown for over a week.
He can only leave the house for necessities like food or medicine, and only one person per household is allowed to do those tasks. He hasn’t been allowed to see his parents and the situation is currently in place until the 25th March, but it could go on longer. Breaking the rules can lead to fines or imprisonment.
Italy has been the worse hit by Covoid 19 in Europe, with over 2000 deaths, but other countries and therefore beaches are following suit in terms of the shutdown. Yesterday the Portuguese government announced that “According to the orders of the captaincies of the port of Lisbon, Cascais, and Peniche, the surf is forbidden for groups of five people or more from the beaches north of Albufeira lake to Obidos lagoon. In addition to the already known total ban in Porto and Gaia. The expectation is that the other captaincies will also take the same measures.”
Similar measures are expected to follow in France and Spain, and down the track, maybe the UK and Ireland. Surfing, like all other social pastimes, will be banned. You sense that could never happen in Australia, especially with Cyclone Gretel currently parked off the coast. But for Roberto, just because it doesn’t seem possible, doesn’t mean it won’t happen.
“The first part of the flu arrived in the north in Milan, which became a red, or locked down, zone,” he said. “However even then my friends and I were all pretty chilled. We thought the media was exaggerating and so I was leading my normal life. I was going on the train, going to the pubs, surfing, but it all changed so fast.”
In one day infections jumped from 2000 to 10,000 in Italy and the whole of Italy was placed in a lockdown. The hospitals couldn’t cope, there wasn’t enough beds and doctors were forced to take the patients that had a better chance of survival. All the other normal medical departments were shut down to focus on the Corona cases.
Having been through that Roberto’s message is now to make sure every surfer knows what’s coming. He’s dropped a clip of what was an epic winter in the Med, with a view to spreading, if you’ll excuse the term, a campaign called #Stayathome. His message is that we all need to do whatever it takes to keep the infections down.
“Our problem was that we didn’t take the necessary precautions at the start and I fear other countries and people are making the same mistake,” he says.  “Don’t relax, don’t shake hands, listen to government advice. Us surfers and young people will be fine, but the elderly and the sick can’t fight it. They are dying. We have already 2000 deaths, so this is real and other countries can avoid such a loss. We have to do whatever it takes to get back to our normal way of life. The waves will always be there.” 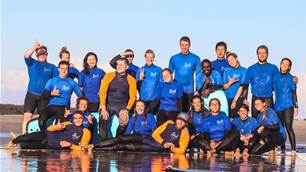 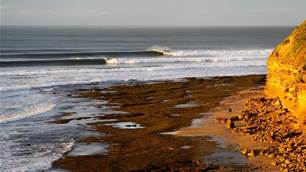 Breaking: The Axe Falls on the Entire Oz Leg of the Tour