Italo overcomes the toughest opponents to claim his place in history.

It could so easily have been a complete fizzer, but instead, we had the dream scenario. As the draw unraveled it was Medina vs John John and Kelly vs Italo, and Italo’s Tie Dye, Billabong army, led by Mariana vs Medina’s mustard yellow Rip Curl soldiers, headed up by the cunning Charlie.

There were also more plots at play than an anthology of Agatha Christie novels. John John desperately wanted the Olympics slot and his first Pipe Masters. Kelly wanted the Olympics, the triple-crown and an eight Pipe title to liberate himself from the shackles of competition. Medina wanted the edge on John John in the world title count and Italo so desperately craved his first title. Meanwhile, Newcastle’s Morgan Cibillic just wanted Yago Dora to keep winning so that he could slip into the final qualification slot.

As we well know the whole script was almost thrown out by what at first seemed like another moment of Medina madness. You can read about the details surrounding that side-drama here. While the other round sixteen heats had their moments, things really got interesting when Medina and John John paddled out for their quarter-final.

On the webcast, John John emphatically stated he wanted the Olympic slot and that’s why he was willing to compete on a heavily strapped knee that probably warranted a little more time to heal. “I’m here to do what I came to do, to represent my country in the Olympics”. It was refreshing to hear a WCT surfer discuss the Olympic dream in an enthusiastic tone. He didn’t say as much but he would have dearly loved to block Medina’s charge towards a third World Title. We can only hope that the John John vs Medina rivalry is rekindled in 2020. 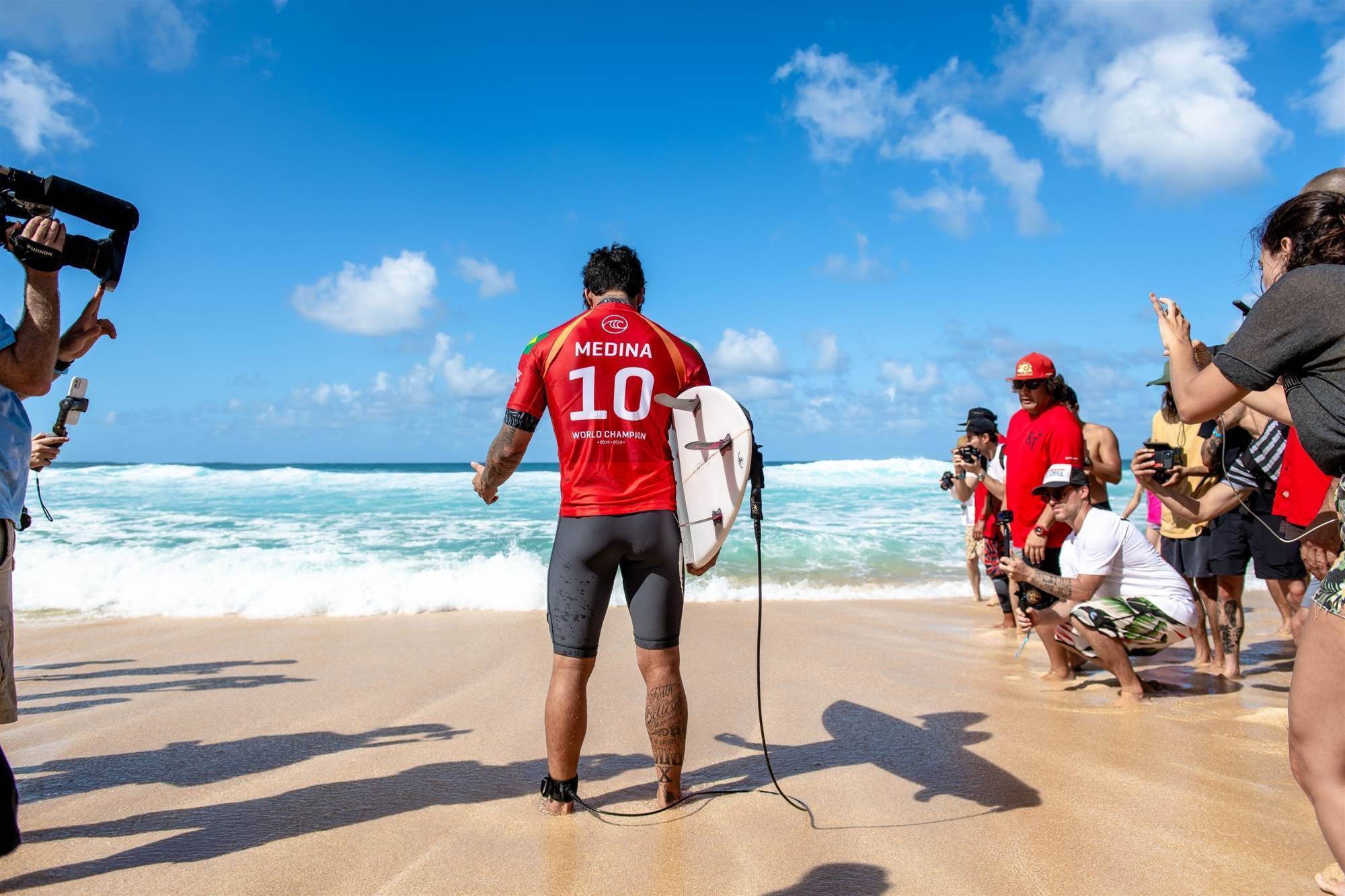 Medina had moments of brilliance but couldn't eclipse Italo Ferreira in the final. Photo: Trevor Moran

The first definitive moment in their quarter-final came when Medina let John go on a good-looking wave. It could have been a fatal move but it proved to be a masterstroke because the next wave was considerably better. It was what some Pipe aficionados call a ‘shelf ’ where the wave stands up with obvious vertical promise and chucks a gaping hollow section. Medina rolled in early and swooped into the widest of electric-lit Pipe tubes. The wave helped set up an emphatic victory over his biggest rival. Medina switched to beast mode while John still looked to be short of his best. To seal the clash of the modern titans Medina jagged the wave of the day for a giant barrel to-air combo. The 9.23 left John comboed and once again without a Pipe Masters win.

After eclipsing Jack Freestone with a buzzer-beater barrel in the quarters, Kelly looked more wired than ever, charged with frenetic energy as he saw the potential for an 8th Pipe win. “There’s a lot on the line here… I’m excited,” he told Rosy as he wrenched his eyes away from the lineup.

However, the increasing swell and North winds played into Italo’s hands as more of the better waves angled towards the Pipeline lefts. Italo didn’t seem as comfortable at Backdoor, but if the lefts kept coming he was always a contender. Meanwhile, Kelly was stubbornly fixated on Backdoor, the wave that has served him so well in this contest and in the past. Italo had the best of the important first exchange, double-hand dragging into a behind-the-foamball traveller and conjuring an exit for an 8.6. As the commentators pointed out he couldn’t have ridden the barrel any deeper or better.  Kelly got swatted at Backdoor and as he paddled out he saw an empty wave erupt, eventually hitting himself in the head because of his poor wave decision. As Barton pointed earlier Kelly was, “The single hungriest competitor in the history of our sport." He may have been working on his calming techniques with Mark Visser and other gurus, but it was still agonizing to see his opportunity for a win at Pipe slip away. In any case, to win the title Ferreira was being asked to overcome the best surfer ever who was also the best ever at Pipe. No one would ever be able to suggest he hadn’t earned the crown. Italo wedged Kelly into combination with a double-barrel on the lefts. It was only a 4.83 but it was sufficient to put Slater against the wall and he never really got into the heat. Still, he had the triple crown victory to celebrate and he made his legions of fans happy when asked about his 2020 plans.

“I might have to do one more lap. It took me till now to get myself comfortable in heats.”

Post-heat Italo confessed he’d chatted to Kelly despite coach Dorian’s warnings. “Shane said ‘Don’t talk to Kelly’, but I did but Shane it’s ok.” For Italo the message was clear however, he kept reiterating the comment, “Just one more. Just one more.” The glory was in sight he just needed to summon his best for a final surge.

Of course, Italo also had to overcome the menacing presence of Gabriel Medina after Gabby monstered Griffin Colapinto in the other semi. Medina opened his semi against Griffin Colapinto by charging at him like a shark trying to spook its prey. He then proceeded to paddle over the top of Griff to secure the first wave, wrapping a legrope around Colapinto’s nose in the process and risking an interference to gain the upper hand. After failing to make the completion, he went into work mode and muscled through a smaller, inside keg just to ensure Griffin had something to chase with his priority.

Minus priority Medina seemed even more frightening and intimidating. He only had a five and a 3.67 but his energy was frantic and it was as is if he almost conned Colapinto into making a poor wave choice with priority.

Medina, the Pipe machine, then used his priority to air-drop into a funneling set and kick out with the spit for an eight.

With three and a half minutes to go Colapinto won a paddle battle for priority. He needed a seven range score, but couldn’t snuff it out and his loss set up arguably the best Pipe Masters scenario since Andy and Kelly met in the final to decide the world title in 2003.

As Medina man-handled Griffin we saw footage of Italo wired for sound and air-drumming to prepare for his final. Was he channeling Keith Moon or Tommy Lee? Or perhaps it was Frank Zappa’s percussion genius, Chad Wackerman? Whoever it was the unorthodox routine worked.

Italo won the psychological and points battle in the opening moments. He had not had a scoring right all day and suddenly in the opening seconds he was dropping into a ledging backdoor grinder, initially pulling in with no grab, and exiting with ease. Perhaps, more importantly, he had out-hustled Medina for the crucial 7.83.

Moments later he claimed wave two and the tie-dye fan club roared as he exited a nugget and threw a full rotation on his Timmy Patterson step-up for a. 6.17.

However, Medina countered with a 7.77 on another shelving Pipe left and left himself well within striking distance and only chasing a 6.24.

Italo got bounced on what may have bee the longest left barrel of the day. It looked for all money that he had threaded the wave, which hit the reef and then zippered wide across the sandbar. Then his confidence was dealt another blow when he failed to find his way through a screamer, after an ultra-late drop. Meanwhile, Medina was doing his darndest to manufacture the 6.24 he needed to gain the upper hand, but the judges weren’t buying his heavy stall tactics – they demanded waves that required a full-throttle approach.

With Medina still chasing a 6.24 Italo swung on a frothy inside wedge that facilitated and ultra-deep barrel and then tossed up an inviting air section. Again Italo chucked his Timmy Patterson step-up at the lip and spun like a chopper blade. The completion earned him a 7.73 and made the equation more challenging for Medina. When Medina’s body language became more deflated it seemed Italo had done the impossible and knocked the stuffing out of surfing’s most charged-up competitor. Medina could not contrive his typical last-minute magic and Italo was the Pipe Master, The World champion and a hero all on the same day.

Post heat Italo was so choked with tears and emotion he could hardly talk, finding just enough words to dedicate the win to his Grandmother. “I dedicate my whole life to this. This is for my grandmother who passed away three weeks ago. …I know Gabriel works hard but this is my moment. I can’t believe it.” 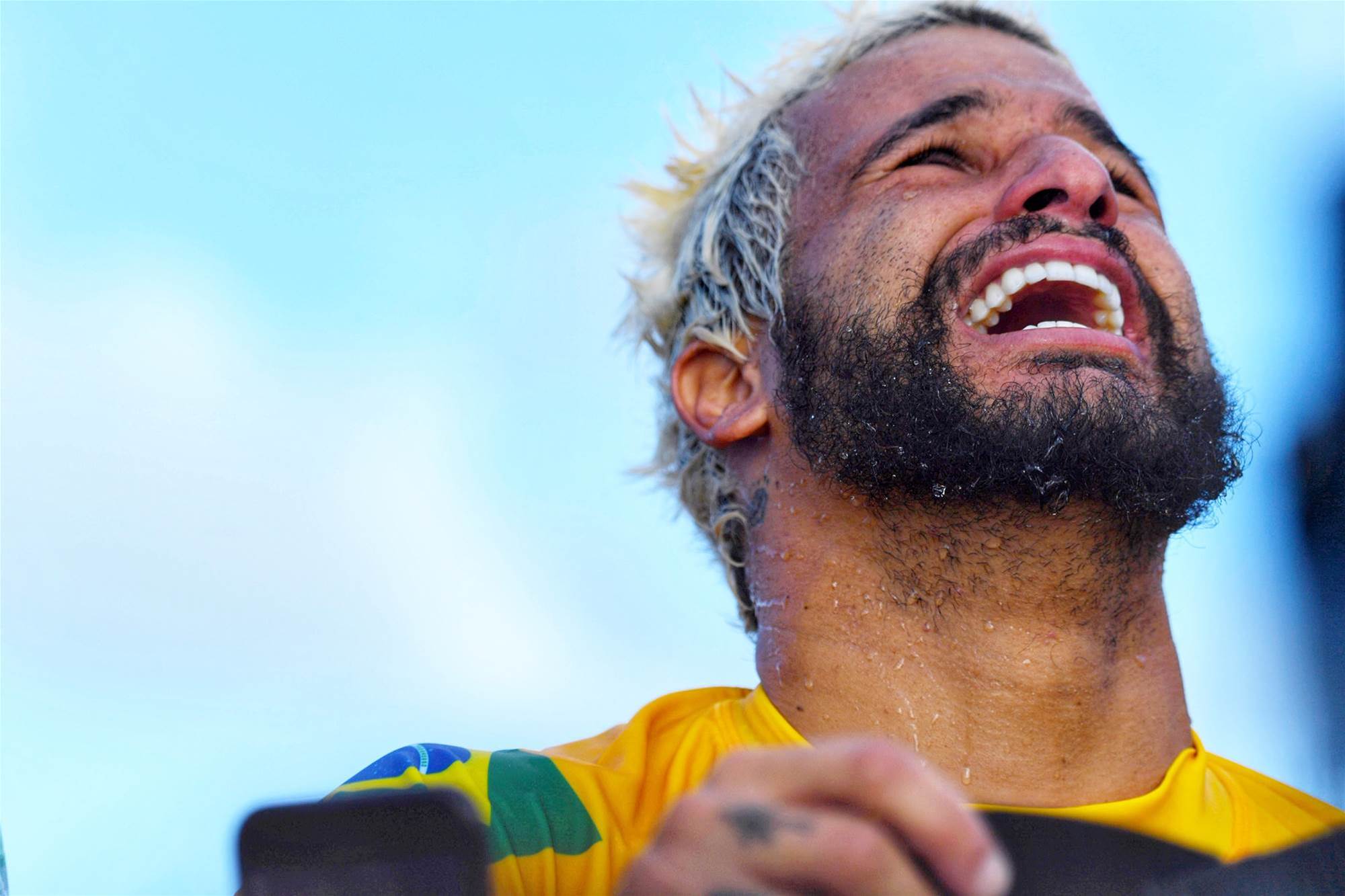 An emotional Italo savours his victory.

Italo had won the first event and the last two en route to a world title no one can ever say he didn’t deserve. His performance in the final at MEO Rip Curl Portugal was truly inspired and probably the best example of progressive surfing all year. Then to claim the Billabong Pipe Masters he put on a display of classic barrel riding, coupled with a dash of aerial pyrotechnics. He is an entertaining and popular champion who has even found a way to put his own spin on surfing’s most frequently used term. What can we say Italo, we’re ‘Stoke-ed’ for you.