Is there an equation for beating Italo at Narrabeen and who can figure it out?

Mikey Wright’s tactic against Filipe Toledo was more obvious than his mullet – you could hear the cogs ticking over between the shaved sideburns, ‘make sure you are on the two best waves.’ However, in inconsistent, shifty Narrabeen conditions commentator Luke Egan had some better advice. “You’ve gotta be on your feet to win the heat.” Mikey might have been better advised to upset the rhythm of Toledo who thrives when he can catch as many waves as he wants and assume that somewhere in the frenzy he will pull off something major. Toledo wasn’t at his best but he caught eight waves to Mikey’s one and with those kinds of numbers he was always going to clinch it.

The WSL knows that Kelly Slater buys them eyeballs. So, if you can’t have him in the event you dial him in on the webcast and let him dissect the action with his cutting analysis. Kelly had no problem verbalising what everyone else is thinking – that Italo and Gabe look pretty sharp and everyone else needs to do some work.

Nor did Kelly hold back when asked what he thought about Owen Wright’s buzzer-beater air against Ethan Ewing. “I thought it was at least a point better than Ethan’s best wave… I thought it was better because it had more variety.”

The judges didn’t see it the same way and left Owen well short of the score he needed to overcome the finessed carves of Ewing. Whether he had the endorsement of Kelly or not it was a major result for Ewing, who is inching towards his full potential. “To get through that feels really, really good,” he conceded. Ewing knows he is capable of being a top-five challenger but also has to deal with the expectation that has been heaped upon him. If he can learn to ride the energy of his fan club rather than buckle under the pressure of it then great things are possible. 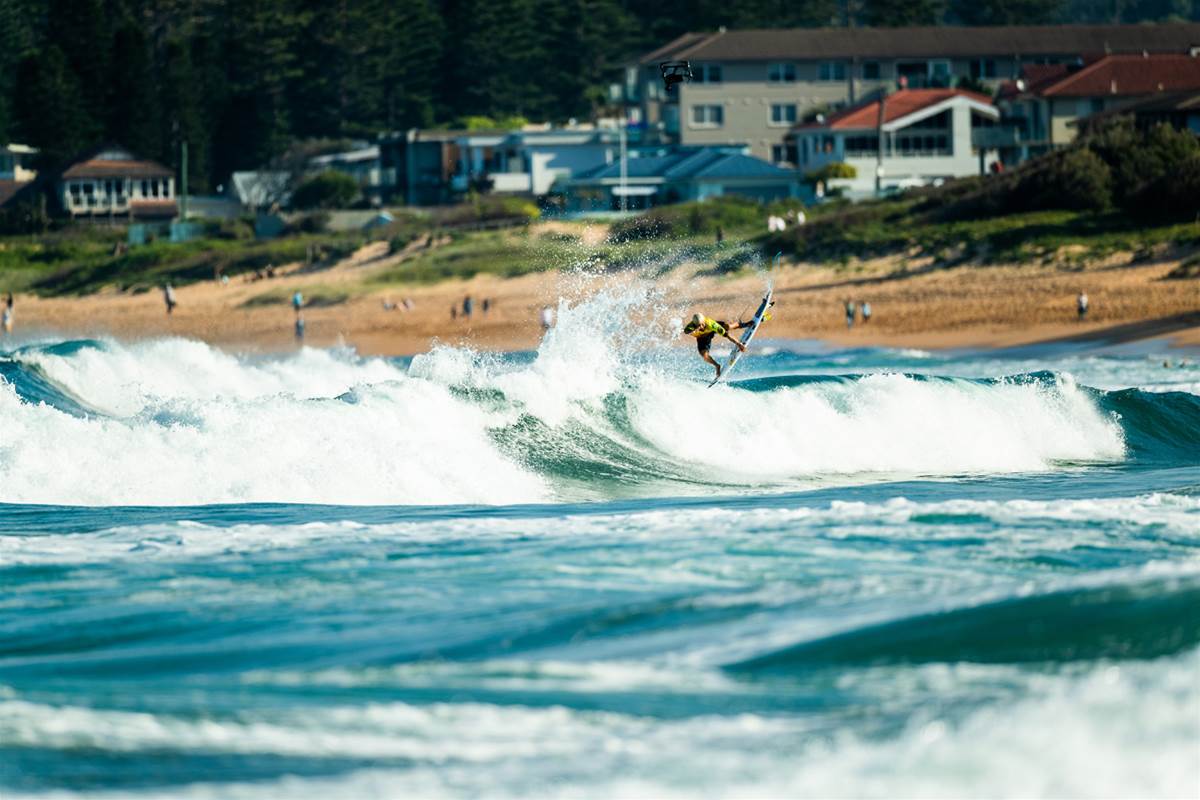 By the time John John Florence paddled out against Miguel Pupo things had become a little grindy. Medina had gotten the job done against Dylan Moffat with forced, mid-range scores. Moffat arguably missed an opportunity to play giant-killer because Gabriel never put it out of reach.

There was a little cloud hanging over John John as he strode down the beach with a standard PU craft under his arm. The jet-black, dark arts epoxy construction had been brushed aside in favour of a board that would let him sit a little lower in the water and sink a rail. He later claimed the additional weight in the PU was a weapon against the wobble and backwash that was plaguing the Narrabeen lineup.

When John John failed to ride out of a fairly standard rotation, the fan club chewed their nails to the quick. While Miguel waited, John switched tactics and went to his other mainstay, the frontside carve. No one holds a rail quite the way John does. Richie Lovett was so inspired he had to get the Mr Squiggle pen out and try and break it down. Rich did a good job of providing a technical analysis of a turn that is pure art. With a 5.5 and a 5.6 in his bag, John wasn’t blazing but it was a confidence-building victory for the Hawaiian who was a little fortunate Pupo didn’t take more risks when he caught the best-looking wave of the heat. 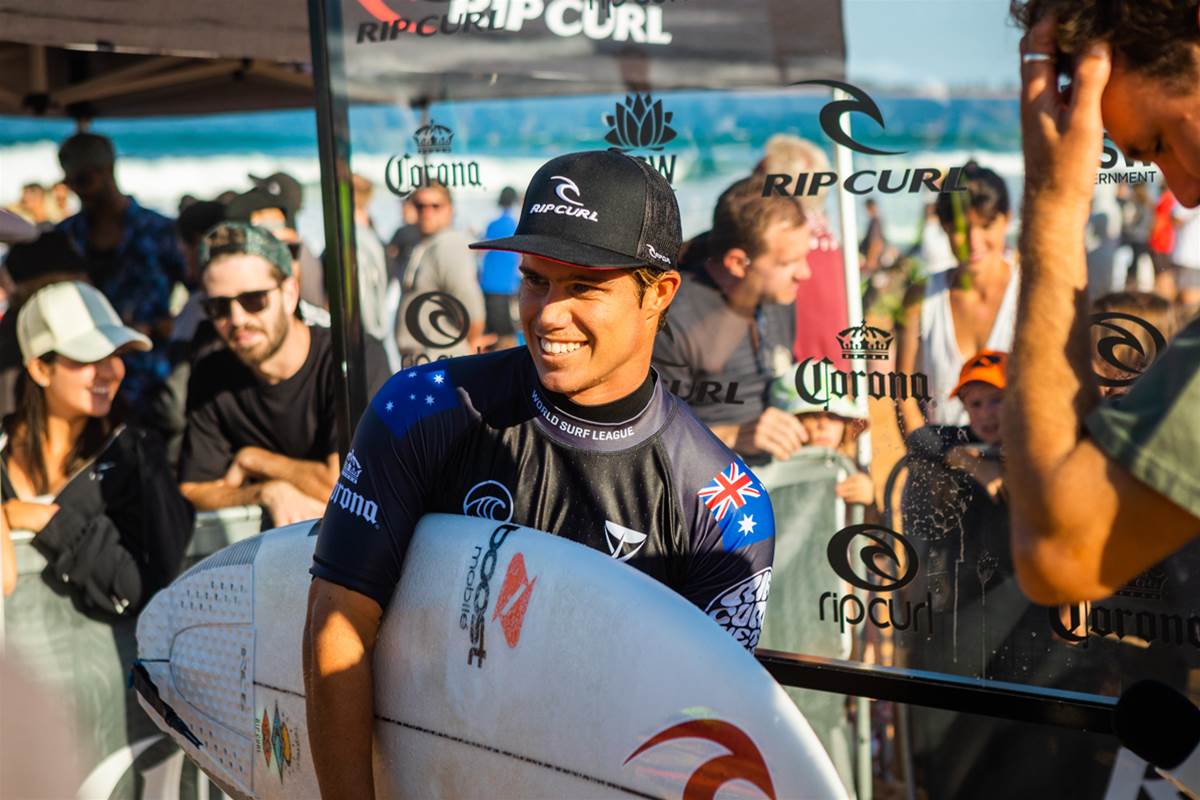 Morgan Cibilic continued to be totally unphased by the reputation of his opposition. While Julian Wilson surfed well below his potential, Morgan surfed to the extent of his and claimed a confident victory. The underdog tag will not cling to the crafty natural footer for long if he continues to chop down the sport’s titans. You have to feel for Will Webber whose boards Morgan rode to reach the CT. The Sharp Eye craft are working beneath Morgan’s stocky frame but Webber deserves a plug for helping him reach the elite stream.

It was left to Italo to do the entertaining. He danced his way through a pre-heat warm-up and then went disco above the lip from the moment he paddled out. For the crowd, it was like the arrival of the main act after waiting patiently through the support shows. Italo’s two opening waves scored 6.5 a piece for single, frontside rotations. His switch-foot floater at the end of the heat was classic showmanship, the actions of a man who is feeding off crowds and in love with his life right now.

The judges were sending a clear message that risk and degree of difficulty would be rewarded. Meanwhile, Mick squared up and hit the lip with vintage precision and venom. Old school vs New school if you want to simplify it. It seemed Mick needed three perfect turns to Italo’s one jump to be in the game. Somewhere in the judges’ heads, there is an equation for x number of good turns = one good air. Is it 3x = y or 2x = y or something more complicated, a little more in flux from heat to heat. Whatever it is, the flightless surfers are striving to figure it out so they have a chance against the soaring Italo.

If Mick couldn’t pull off the come-back miracle against Italo, Australian fans could at least take solace in the fact the Jack Robinson snuck past the mercurial Jeremy Flores. Robbo needed a big old straight air to catch Jeremy in the latter stages and then had to muscle-up and make aggressive use of his priority as Jeremy steamed down the line, gesturing to the judges. Flores was campaigning for Narrabeen to be called a point-break, which puts a twist on the priority rule and gives him a case. You have to give him credit for trying it on but the judges weren’t buying it and Robbo was safe, summing up the mood of the day with his post-heat comments. “I just did whatever it took to get the job done.”

In the women’s event, the major story was the elimination of Newcastle runner-up Isabella Nichols. Pitted against a rampaging Johanne Defay and determined Brisa Hennesey, Isabella struggled to find a mid-range score under pressure. After the break-out performance at Newcastle, it was a tough lesson for the tour rookie, who was obviously looking to secure her position in the crucial top five. Isabella’s next event will be critical in terms of building on the confidence gained from the Newcastle runner-up result.