Was yesterday the most exciting single day in pro surfing history? We think yes!

Is professional surfing not the greatest sport to ever inexplicably flicker into existence on this floating space rock? If yesterday’s action at the Corona Open J-Bay is anything to go by then yes, yes it is.

What a narrative Jordy Smith is weaving at the Corona J-Bay Open. He is the hero in this story. The hometown boy come good. His road to victory blocked at every turn by the man. But there’s one thing they didn’t count on, the size of the heart that beats inside his chest. It’s as large as those of the lions who roam the savannah in this, his native land.

Yesterday Jordy was forced to endure not one, but two re-surfs. Massive on a day, that should the event have run the whole way and he made the final, he would’ve had to surf six times.

The first re-surf was the now famous round four clash with Filipe Toledo and Julian Wilson. The previous afternoon, Jordy was winning the heat, comfortably, when a breaching shark called a halt to competition. Fair enough.

The next morning dawned however and the devil wind rose. Filipe sensed an opportunity and took to the air(more on this later), and completely made a power game, which struggled in the chop, irrelevant. Jordy was going into round five. The heartbeat grew stronger.

In round five Jordy drew Connor Coffin. At the end of the duel Jordy was victorious. But once again, it would be taken away from him. The judges, having underestimated the degree to which Connor was tubed on one of his waves, believed, due to their fuckup, the result was not accurate and the heat would have to be re-surfed. The Lion heart is pounding like a tribal drum.

Even if only self-perceived, a wronged Jordy is a dangerous Jordy. When he is angry that lion heart only grows larger, passion building beneath the skin, ready to explode from every pore. And it did erupt, in the form of a 10 and a 9.37and a berth in the quarters.

Yesterday, the young Brazilian gave us a taste of the future. It was, in fact, a shock to the system to be jolted that far forward through the space-time continuum on a single wave. The eyes couldn’t quite believe what they witnessed. Filipe gave us a glimpse into a world where riding waves will become more like a halfpipe run in snowboarding than surfing, as we know it. Whether that’s a good thing or a bad thing I’m not sure. But one can’t deny the skill it took to do it, and also applaud the fact he left the judges with absolutely no choice but to throw down 10’s.

Holy shit! Just what exactly was going on there? There are so many questions. Was it the result of the driver being caught out by the wave and trying to escape? Did the driver’s eyes simply glaze over at the site of that bomb, and he had to ride it despite being in a motherfucking boat? What exactly was his plan if that went wrong? Upon reaching the shore after the event, was he hung, drawn and quartered by the WSL for the potential of slicing and dicing its competitors? What did Richie Porta score the ride?

Man-eaters in the field of play.

In what other organized, commercial and semi mainstream sport does the potential of being eaten alive come into play? None! For example, imagine if you will, a game of Rugby League. The game is a boring one. Viewers are tuning out. That is until the producer hits the big red button and releases a hungry lion onto the field. That would spice things up nicely.

It was during the quarterfinal between Mick Fanning (seriously) and Gabriel Medina, that a great white began taking a lazy swim up the point through the competition area. Skis swooped in quickly and picked up Mick and Gabby and sped them to the safety of the larger boat. The same one that was bombing sets earlier?

Now here is the key to unlocking mainstream viewers. Of all the amazing surfing going down at J-Bay, some of the best ever, there has been not a mention of it in the news. As soon as the shark swims into the line up … boom! News journalist’s Google alerts light up like Christmas trees. It appeared here, here, here, here and here etc.

Even my wife, who simply leaves the room anytime surfing is on, to do anything other than watch surfing, was glued to the screen watching drone footage of the shark swimming up the point, she was genuinely enthralled. Show her Filipe’s 10 however and she’ll promptly yawn and walk off. 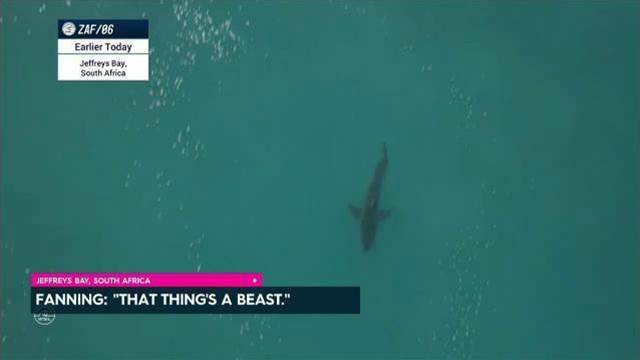 It has been as close to a level playing field as you can get in surfing. Consistent sets. Each wave similar to the last – a true test of ability with less luck in the mix.

J-Bay has provided a truly satisfying spectacle as a surf fan.

We can only hope Finals day delivers again. I’ll be watching. But my wife, she’ll probably be doing something else … anything else.