Robinson and Ewing qualify after inspired performances at Sunset.

There is no Australian contender for the world title this year, but if OZI performances on the WCT have been disappointing this year, at least the cavalry is arriving via WQS.

As the warping north swells continued to flex and bend through the inside bowl at Sunset it was the Australians who dominated. By the time the quarterfinal draw had been locked in the Australian quintet of Ethan Ewing, Jack Robinson, Morgan Cibilic, Stuart Kennedy and Jacob Willcox were all in contention to qualify alongside Connor O’Leary.  Zeke Lau was the only non-Australian who was still in control of his destiny and the Hawaiian Superman, as he’s known, needed to win the event to reclaim his spot on the WCT.

In quarterfinal one, Willcox whiplashed into second on his backhand, behind Zeke who dropped the hammer on the inside Bowl for a commanding victory.

It was high drama in quarter two when Morgan Cibilic incurred a blatant interference on fellow qualification-hunter, Stu Kennedy. The commentators had just announced Cibilic as the 2019 Triple Crown Rookie when a moment of hot-headedness saw him drop in on Kennedy, who held priority. Kennedy could only benefit from the mistake and wasn’t exactly going to let a blinkered Cibilic know he was coming. For Cibilic, given he’d just won the rookie award, the moment was like winning the minor premiership as a football team only to lose the Grand Final with a stupid penalty. Meanwhile, Kennedy didn’t miss a beat powering to a quarterfinal victory. 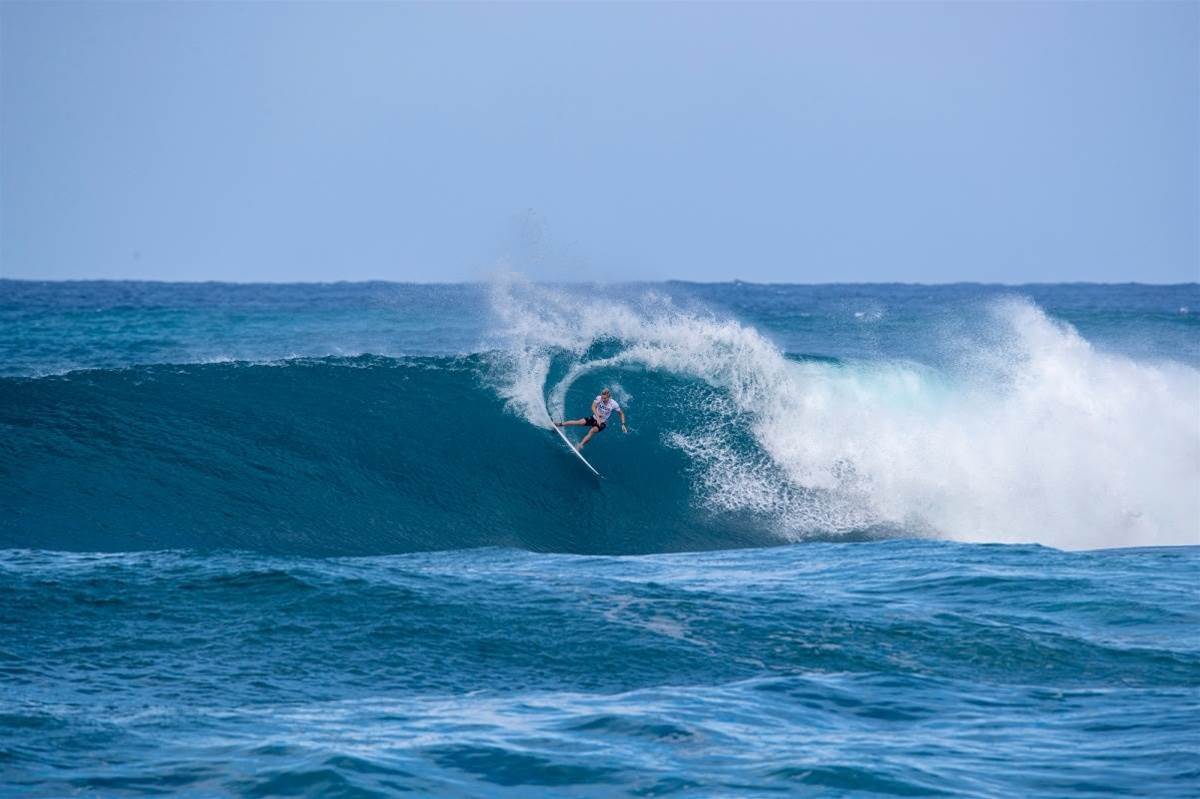 Ethan Ewing's railwork at Haleiwa and Sunset earned him a well-deserved spot on the 2020 tour. WSL/Heff

In quarter three Jack Robinson and Ethan Ewing were like a well-oiled double act – two surfers with class and panache performing at their best in a high-pressure situation. It was pretty to watch. Robinson conjured the barrel of the day (so far) on his opening wave for a 9.17 and moments later Ewing laid down a massive lay-back hack that contained a little more emotional content than his typically polished turns. Pancho Sullivan called it  ‘one of the turns of the entire event’. That’s a major prop from a master of the lay-back jam. Ethan got an eight and Pancho thought he deserved more but both Robinson and Ewing only needed mid-range back-ups to secure their semi-final berths and did the rest easily.

In the post-heat interview, Jack Robinson flicked his head like a cow tossing aside an annoying fly, when he was quizzed about his qualification prospects. He knew he still needed more to secure his WCT slot.  “I don’t think about that, not one bit. All those little thoughts you have to put out of your head… It’s a beautiful day I just want to go and catch more waves.”

In semi one, Stu Kennedy and Jacob Willcox came up against a Hawaiian roadblock in the form of Zeke Lau and Cody Young. Unfortunately, the kangaroos couldn’t bound over the wall and their WCT fates were left hanging in the breeze.

Kennedy was unlucky not to ride out of a huge snap to airdrop. Tragically he needed a third to confidently finish in the qualification zone and he finished fourth – completing the single move might have made the difference. 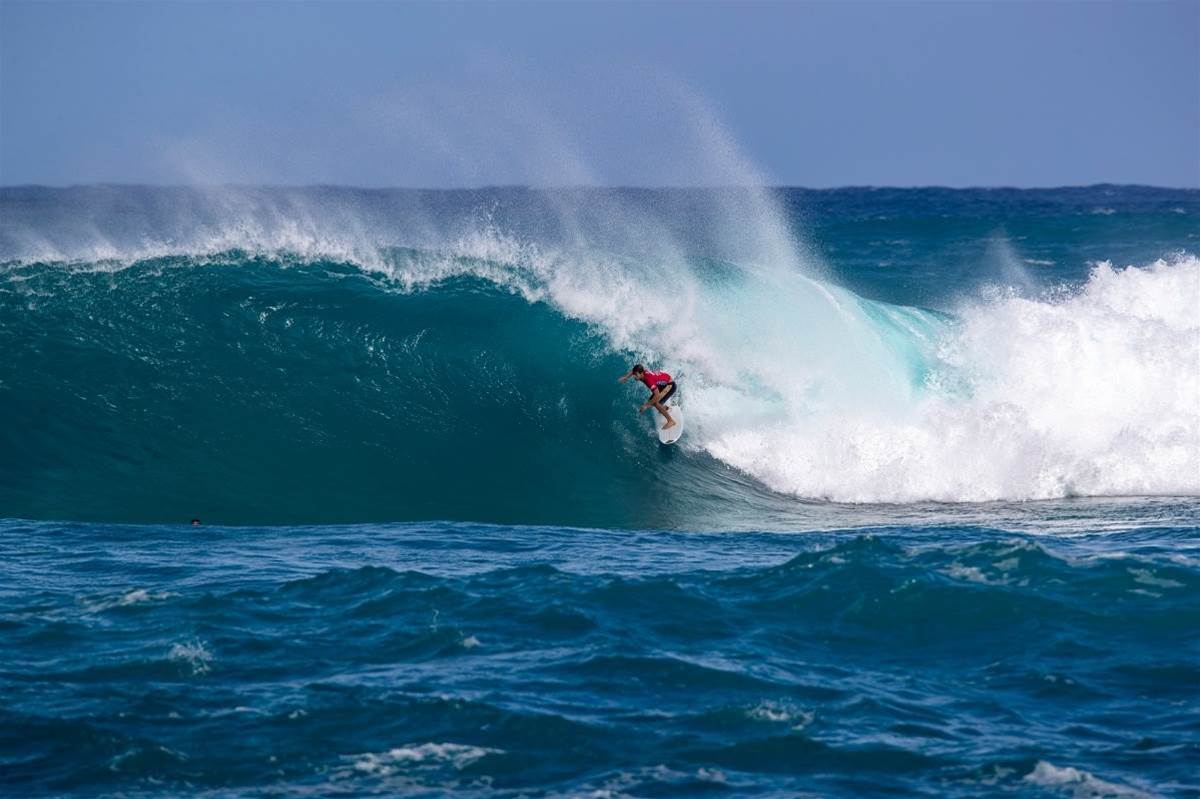 Robinson's savant-like knowledge of the inside bowl tubes was amazing to witness. WSL/Heff

By the time semi two paddled out the swell was tapering. This time the Ewing and Robinson double act was slow off the mark as Kanoa Igarashi and the unpredictable Wesley Dantas went to work.  Robbo wet the rail for a confidence-boosting 6.83 on his first major-scoring ride, but Ewing failed to deliver on the following wave, despite being presented with the sort of section he’d been slaying all event. On wave two Robbo miraculously muscled through a thick sunset barrel with a doggy-door exit. At Sunset it’s more an elephant door exit and somehow he hung in where other surfers, including Kelly, had been slapped-down all day long. Suddenly Robbo was in the lead and the WCT dream was looking like a barrel exit at one of his favourite WA waves – well within reach.

Commentator, Chris Cote said out loud what everyone was thinking.  “This is really happening, Jack Robinson’s doing it.”  As Robbo locked in a 7.43 with a ridiculous Sunset floater, Ewing was winding through the turns, trying to manifest some momentum. It seemed his path would not be as smooth even if his surfing was, but towards the end of the heat the WSL made his spot on the WCT official and fifty percent of the collective OZ tension slipped away.

Moments later Ross Williams went out on a limb with his arithmetic and suggested that Robbo would also be guaranteed a WCT spot if he made the final, which was looking very likely. At that point, there was a fist-clench from every Australian fan and even if you weren’t an Australian you had to admit it was also a triumph for surfing purists who like to see competitors on tour who can bring an otherworldly element to performances – these are not stock standard surfers.  However, before the final Williams partially retracted his claim and there was no official confirmation. The qualification scenario was still in a state of flux as they paddled out for the final.

In the final, it took twenty minutes for anyone to secure a score of consequence. Surprise, surprise it was Jack Robinson exiting an inside bowl nugget through the front door for a 7.17. The front on angle doesn’t do justice to the square barrel at Inside Sunset but Robbo is well aware that it throws up worthy slabs and made it his bread and butter throughout the event. Shortly after Ewing swung through two sublime turns in his lime jersey.

The drama doubled-up when Ross reneged on his earlier Robbo claim and indicated that if Zeke won the final, Jack still needed a second to secure his slot.

The impact of this statement became all the more significant because we’d just watched Zeke run over Jack, ding his board and fail to make an exit from a major barrel. While Zeke paddled for a back-up board Jack went back to his happy place – the barrel – and locked in another two giant funnels in furious succession. The second was a 9.4 and all but sealed the final for Jack Robbo. As Ross Williams astutely noted there was no fluke to this performance, Robbo was simply reading Sunset better and taking the right line through the gaping caves.

Just to emphasize the point he dropped his own wallet and got barrelled again for a 9.67. Williams insisted it should have been a ten.

Ten or not, Jack Robbo had just bounded on to the WCT stage in the most flamboyant fashion imaginable, his record-breaking heat total at Sunset serving as a warning to the WCT competitors he will face next year. As the final wrapped up Ross Williams was already projecting towards Jack’s performances on next year’s WCT at events like G-land. Meanwhile, you had to feel for Zeke who might have won the final on any other day and secured his slot on the WCT. As it stands the WSL currently has Ewing, Robinson and Morgan Cibilic inside the qualification zone for next year’s WCT. Both Yago Dora and Deivid Silva can still requalify through the front door, with Stuart Kennedy first in line to claim one of their spots if they double qualify.

However, it was Jack Robinson’s day to celebrate with Ethan Ewing and Morgan Cibilic taking the minor honours on a great day for Australian surfing. “It was a while coming, I felt like I wanted to get here a bit earlier but it happens when it happens …” commented Robinson as the celebrations began.

“I’m in a good place … I’m ready,” he assured all who were watching. 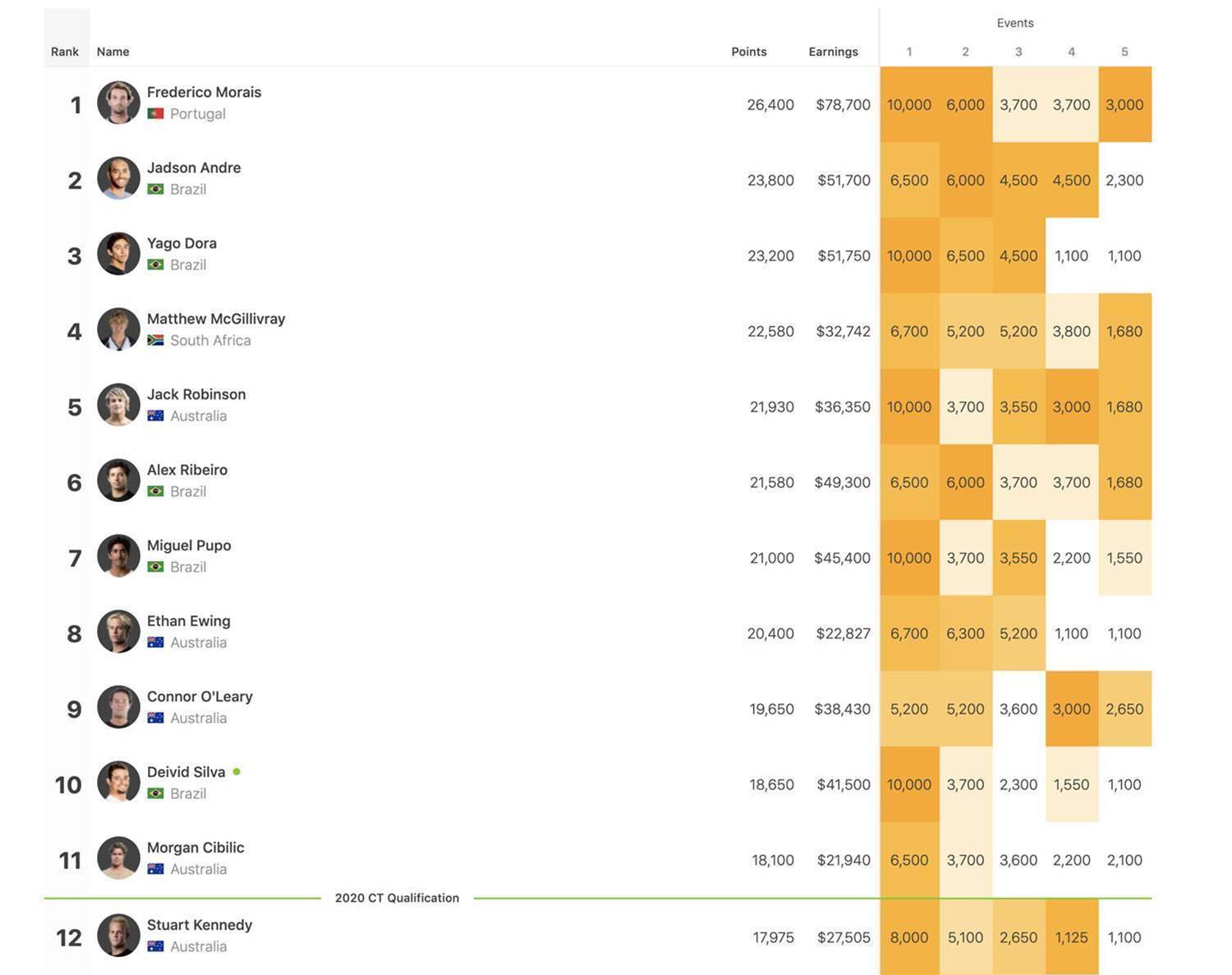