If that was the first 45 minutes of the contest I’d hate to see the carnage if it kept running,” says round one survivor of the Jaws Big Wave World Tour event, Russ Bierke.

It was over in 45 minutes but the impression it’s left on surfing might last a hundred years. Or maybe until tomorrow when the rest of the men’s division of the Big Wave World Tour event at Jaws is set to run. South Coast hellman, Russ Bierke was one of six competitors who braved the opening heat this morning, in which two of the heaviest tubes in surfing history were ridden, before the contest was called off due to conditions being simply too big, too clean and too powerful to paddle. Russ gave us his view of all the waves, wipeouts, and mechanics of one of the greatest displays of big wave bravado surfing has ever seen.

Tracks: How are you feeling?

Talk us through the day man?

The girls were up first and we were sitting on the boat, even though it was lighter wind it didn’t seem like they were getting too many and they keep getting cleaned up. We were wondering why and then once we got out there we figured it out. It was especially slow when they were surfing and then by the time we got out there the wind picked up and the swell pulsed and it was moving so quick. It was nearly the fastest I’ve seen swells move I think. We were like, yeah, that’s why they weren’t catching much. We got out there and the wind was getting stronger by the minute. It had this full ledge in it and looked it was going to let you in. Then you’d take a few paddles and you’d see this ledge form and get blown off the back of nearly everything. It was pretty wild.

Farkenell. Can you tell us about your waves - you stuck one and got fucken lit up on another one?

(Laughter) Yeah, my first wave was a big peaky north one. I was like, I’ll just go and catch a wave, the heat’s almost over. I wasn’t expecting much and it ended up being a pretty hard drop as it was, but there was no end bowl so I could just ride out into the channel. I was just happy to get one on the board and then the minutes were counting down and I still hadn’t had a back up. I found a good looking double up and I felt like I was in the spot, and yeah, I just had to fight the wind so hard to get into it and I think I was just a bit off balance. I was trying to keep my board on my feet in the wind and still push down it. I felt my heel edge catch and I was just flying through the air upside down looking at the lip throwing over, it was a pretty solid wipeout. I think the one I had in Nazare was a bit worse, but yeah if I hadn’t had that wipeout at Nazare that would have been the worst wipeout of my life.

You disappeared for an age. We didn’t know what happened to ya!

I popped up and copped the second one pretty quickly on the head. That one rolled me even harder I think. Then I popped up again and I was nearly on the rocks. I had to deflate my wettie and start swimming under waves. There were so many waves and so much going on the skis couldn’t get in so I was thinking I was going to have to crawl around on the rocks. They came and grabbed me as soon as they had a chance. My leash snapped so I don’t even know where my board is right now, probably in a million pieces on the rocks. Thankfully I’ve got a couple of back-ups.

What are you feeling when you’re paddling into waves on a day like today? And what does it look like?

I think pure fear really. It was pretty nuts. The waves were just moving so quickly. You think you have time. Normally, Jaws stands up and stands up and then gives you this chip in. I swear as it hit the reef it kept getting faster and faster. You’d think you were in the spot and you’d feel like the lip was nearly going to throw over you and you’d still just stand up and get blown off the back.

Woah, that makes me feel sick.

Yeah, there was a fair bit of carnage as you saw.

Farkenell, and what about Twiggy’s tube?

Aw, that thing was so nuts. He did so well on that. I’ve only seen a couple of iPhone clips of it but yeah the take off on that looked crazy. I was just a bit wider looking down it and couldn’t really believe he had his head down and going on the thing. It was so nuts.

The way it ledges up, it almost looks like a perfect slab, except 20 times the size?

Yeah, today it was like a full slab. You’d think you’d be able to get into it - it’s weird though the ledge is like, Hippo (Ryan Hipwood) referred to it as almost a Shippies step, which I kind of agree with. It was a mid-face ledge rather than being able to get under it at the top of the wave. So it’s really hard to control your board going over it especially with how windy it was. If it was glass it would have been one thing, but with the wind and the 20 second period it was all too much. If you had all day to sit out there and wait and pick your waves I think people would get a couple of good waves, but if you’ve got 45 minutes to get two I think you’re pushing it a bit too hard. I’m glad they recognised that and called it off.

Right, so you thought the decision to call it off was pretty warranted?

Yeah, I think everyone did. At least everyone in the heat who had just surfed. Alex Botehlo got pushed to the bottom twice I think he said. Twiggy got so smoked, Billy got smoked, I got smoked. Everyone who got a wave was rattled after it.

Right, cos Billy (Kemper) was on the broadcast as they were making the call and saying he wanted it to continue running but I guess he was the odd man out…

Oh really? Yeah, he must have been. Everyone who got back on the boat was pretty unanimous (laughter) and glad it got called off, and a couple of guys in the next heat as well.

Could you see Billy’s wave from where you were?

I saw him take off. It was kinda straight up. He paddled straight to the peak and whipped it under the first wave that came through. It was pretty nuts. It was like, alright, this is how we do it (laughter).

How many times have you surfed Jaws and how experienced are you out there?

I’ve surfed it nearly every time it’s broken since that El Nino year in 2015/2016, so I got to surf six times that winter and I’ve been back a few more.

And how did today stack up to previous experiences?

That was the gnarliest I’ve ever seen it for sure. It was just so thick and moving so fast. The day Aaron Gold got the biggest paddle wave ever was maybe a bit taller but the swell hasn’t peaked yet - it’s meant to be peaking in an hour or two - I don’t even know if I want to see how big it is out there right now. The difference with that day is that it was even a light onshore wind, which you couldn’t tell looking at the footage, the wave moves so fast it makes its own offshore up the face.

I’ve got a Surfline swell table - because there are bouys really far out from here - that can tell you if you look at the period and the direction of the swell how long it will take to get to shore from the outer bouy, and it said the speed of a 20 second interval wave is 30 miles an hour. When that’s coming at you at 30 miles an hour with a 15 knot offshore - yeah. The wind was so strong when you paddled for a wave and missed it, you’d be blinded nearly until the next wave.

Argh, how disconcerting is that?

So terrifying. If you were in the mist you’d just start scratching cos you didn’t want to be (caught inside). And it was pretty much non-stop, every time you looked to the horizon there was just line after line after line. That was especially gnarly because if you paddled for a wave and couldn’t get it or didn’t want to get it, you’d turn around and have one on your head. Or if you fell you’d have one on your head. It wasn’t like you could wait until the end of a set so it was just that wipeout. If you fell you were getting battered the whole way.

What was the mentality among competitors? Were you psyching each other up? Were you talking? Or were people ready to die today?

Psyching each other up but definitely looking out for each other. It wasn’t like we were just at each others throats. Stoked for someone if they got a wave and glad they popped up afterwards. It was pretty good vibes out there. I think we were all just tripping on what it was doing out there.

Were you considering that you might be seriously injured or killed or that might happen to someone in the heat?

I guess you try not to think about that. They do have the best water safety guys in the world looking at us. When there is six people out there they can really focus on each person with the safety and everything. It’s pretty great no one came in with any injuries. If that was the first 45 minutes of the contest I’d hate to see the carnage if it kept running.

They’re looking at running it tomorrow. Who’s your tip?

Twiggy was looking in form today. That one he got was so nuts. I think it’s the kind of place anyone could take out, especially in these conditions. It’s just you need to be in the right spot and put your head down.

Fuck yeah, Russ. Thanks for chatting to us mate. You’re a fucken hellman.

(Laughter) No worries. Talk to you soon.

See all of the waves below, and listen to the full audio of the interview below that! 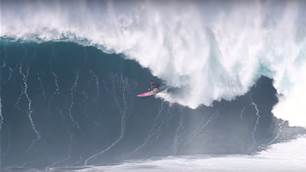 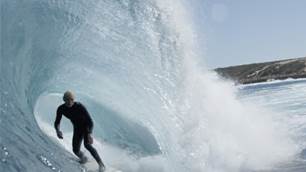