A Behemoth Entry at Haleiwa that will be hard to beat.

A question. Have you been keeping up with the now digital Vans Triple Crown of Surfing? With plenty of epic swell filtering into the North Shore since the Pipe Masters wrapped, the entries have been coming in hot.

Here’s how the WSL breaks the event down on their site:

Featuring the three iconic surf breaks of the North Shore - Haleiwa, Sunset and Pipeline - 125 eligible men and women competitors will submit footage of their best two (2) individual waves from each break, for a total of six (6) waves. With a total prize purse of $200,000 up for grabs, men and women winners will be crowned for each event, while the overall Triple Crown title contenders will need to earn top scores from all three breaks combined to claim the championship. Adding to the event's online engagement, Vans has created a "Fan Voting" period of the contest window. Fans will have a seat in the judge's booth by voting online to help determine who wins the first-ever digital Vans Triple Crown of Surfing title.

We’re big fans of the concept. Taking away the emphasis on competition results and giving the eligible competitors, of which there are 125 men and women, a month to capture their two best rides at each location gives a truer reflection of which surfers have been dominant over the winter.

However, in the traditional format, keeping up with the Triple Crown’s progress was simple. Simply tune in and watch the three events at Haleiwa, Sunset and Pipe, and by default, you’re following the Triple Crown race.

Keeping up with the race for the crown in the digital format is a little trickier, and takes a bit more dedication. There are two official places where entries are logged. On the Vans Triple Crown of Surfing website, which you can find here, and their Instagram page, which you can view here. However, entries seem to be lagging a little behind what’s being posted elsewhere on Instagram. The WSL has been posting entries via their account, and individual surfers are posting to their accounts too. So, in order to truly keep up with what’s being thrown down on the North Shore, it’s best to bounce around Instagram from account to account. It’s a bit messy, but there is some amazing surfing going down that’s worth searching out.

That includes this ludicrous wave from John John at Haleiwa. We’re no judges, but we can’t see this wave being scored anything less than a 10. That first turn alone is in a league of its own. It’ll take something pretty special to top that at Haleiwa.

In terms of the real judging, we’re don’t have it in us to break it down on their behalf, so here’s a video featuring head Judge Pritamo Ahrendt, in which he breaks the whole thing down. Including how you can cast your own vote for your favourite waves.

So, that's how it all works, now the big question is, who’s gonna stop John John from making a clean sweep of the North Shore this winter? 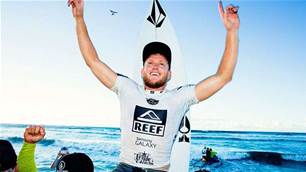