John John is "so stoked" and Medina is a step closer to a world title.

“It’s the best feeling in the world, I’m just so stoked right now!” John John proclaimed to the stadium as everyone else furiously started number crunching. Because John John’s multiple 9’s and Jadson Andre’s first final in two years aside, no one can stop talking about the World Title Race. When Josh Kerr took out Gabriel Medina in the second quarterfinal match up, everyone knew Kelly was watching. When the six foot Saffa took out the 42-year-old Floridian in the last quarterfinal, everyone knew that Medina was watching.

“Yeah, I watch him” Medina answered Ronnie Blakey’s question in his casual Brazilian drawl. “There are things that have to happen. If it has to happen it will happen,” he continued with the limerick, a stark contrast to the mathematical analyst that seems to live inside Kelly’s head. Ronnie persisted, asking the number 1 if some of his competitive drive has been deteriorating over the last couple of events with two fifth places. “I have good boards and every contest I feel like I am surfing good, I’m not putting pressure on myself, I just need to do my job.”

If Medina wins in Portugal, we’re going to see the first ever Brazilian crowned the King of Surfing for 2014. And there’s going to be a few mixed feelings about it. If Gabriel gets third, Mick and Joel will be out of the running and Kelly will need to take out the win to move the title race to Hawaii.

It seems almost serendipitous that a Brazilian might clinch a World Title on the beaches home to the largest group of Brazilian fans outside of Brazil. They may speak different Portuguese dialects but the feelings seem to be the same. With direct flights from the South-American country straight into Lisbon, it’s fair to say there’s going to be a few people on the beach in Peniche to witness whatever history is in the making. 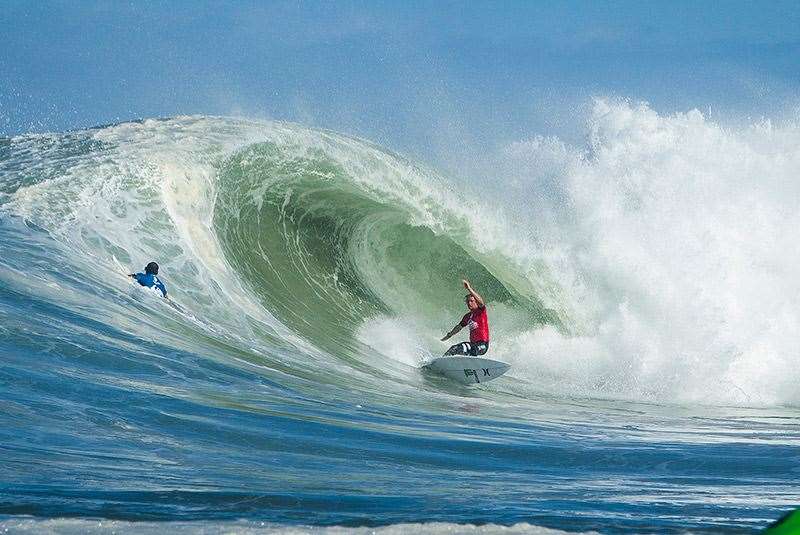 John John Florence puts on the anchors as Jadson Andre looks on from the shoulder. Photo: ASP/Poullenot