While Joel Parkinson puts on a sizzling performance.

“I bet his feet are numb,” said someone in the surfers’ area as Owen Wright fumbled on his first wave, a potential wave of the heat and wave of the morning. Wright didn’t slow down though, despite this early wobble. Before long he had picked up a bomb, smashed it all the way down the bottom end of the point in front of the judges to pick up a 9-point ride. Owen knows how to get the high scores when needed. He followed it up with a 7.17 and the little guy Tomas Hermes was on the ropes. Not quite a 20-point heat, but a solid win for Owen.

Taj however, wasn’t that lucky. With Alejo Muniz as amped and frothing as a frothing Brazilian can be he was going to give this heat an extra push. Taj was looking smooth and radical, but Alejo found his rhythm, surfed with confidence and could do no wrong. Taj was obviously disappointed, but he is going to be a dad quite soon, so a little bout of disappointment is going to be replaced by an ocean of other feelings over the next few months.

Is a ‘rock and roll float’ an effective term to describe any thing in surfing? The sweet-faced Joey Turpell is prone to use it quite often, and utilised it to great effect when describing Brett Simpson’s surfing against Nat Young. Or is it great effect? Sometimes I just don’t feel it. Sometimes I find some of the new terminology a little manufactured, and not really descriptive of what’s going on. A close-out floater is just that – a close-out floater.

The new WSL is a strange kind of baby. And something that has changed and evolved so rapidly and so significantly, that it is quite hard to comprehend at times, especially for someone who has been covering the JBay event for about 20 years. There were events in the past that were so much like a big family hanging out, and there were events before that were small, cold, rainy proceedings but that still had an incredible, electric vibe to them. Just a handful of people running the event, surfers and judges mingling after hours, and a tent erected on the beach to deal with all people and proceedings. The new WSL is a big baby. The biggest in the class. There are so many people in their employ, so many people with radios and with clipboards, scurrying around importantly and looking very busy – sometimes way too busy to even say hello, or to break into half a smile. Way too busy. It’s sad that a lot of the old school vibe that used to exist around surf events is gone forever, and that it’s now simply a treadmill, with everyone working for the man.

However the new WSL is an amazing corporation for the simple fact that they are pulling off incredible surf events. Everything about a World Surf League Championship Tour event is effective, from the infrastructure, to the retail outlets, from the safety and security of surfers and spectators, to the incredible webcasting and audio-visual output. It’s a machine all right, but a slick machine delivering top quality footage, and us the spectators and the surfing fans, are the ones who are reaping the benefits.

Today was all about Park who surfed a blinder. With a heat total of 18.84 he was a stoked and gibbering mess when he came in for his post heat interview. In an adrenalized stream of consciousness flow to Todd Kline, some of his comments were, “Those are the heats you just dream of at JBay,” and “It’s like butter, it’s like a knife through butter on a canvas.” But his final breathless comment summed up the euphoria, “It’s hard to describe because you get to the end and then you get to the top, your heart rate’s so elevated and you just want to stop and take a breather but you can just see them all the way. You can see them all the way from Magnatubes, they’re all the way coming down here. It’s like anticipation kills the cat kind of thing.”

Jordy Smith and Adam Melling had a poignant heat for two reasons. Firstly, Jordy beat Adam in the final in 2010 at JBay, and he has never lost a heat to the hulk from Lennox Head. Secondly, no sooner had Melling beaten Jordy than he returned to the water to surf against Nat Young and was completely comboed, blasted out of the water by the nuggety goofy-footer and sent home. Talk about pleasure and pain. 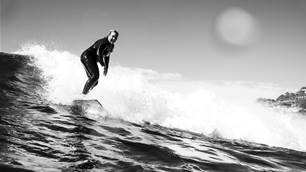