Slab-specialist Josh Ku just wanted to see his American girlfriend, Berit. The only problem was that she was on the other side of the world in the midst of a pandemic that had made international travel a taboo.

Initially, Josh tried to wrangle an Oz Visa for his girl. However, after six attempts the Australian government was still not budging so he tried to go the other way. Turns out the USA was less inclined to stand in the way of love. Before long Josh was boarding a flight to L.A with a view towards reuniting with Berit and bailing to Mexico to ride out the worst of the COVID crisis. 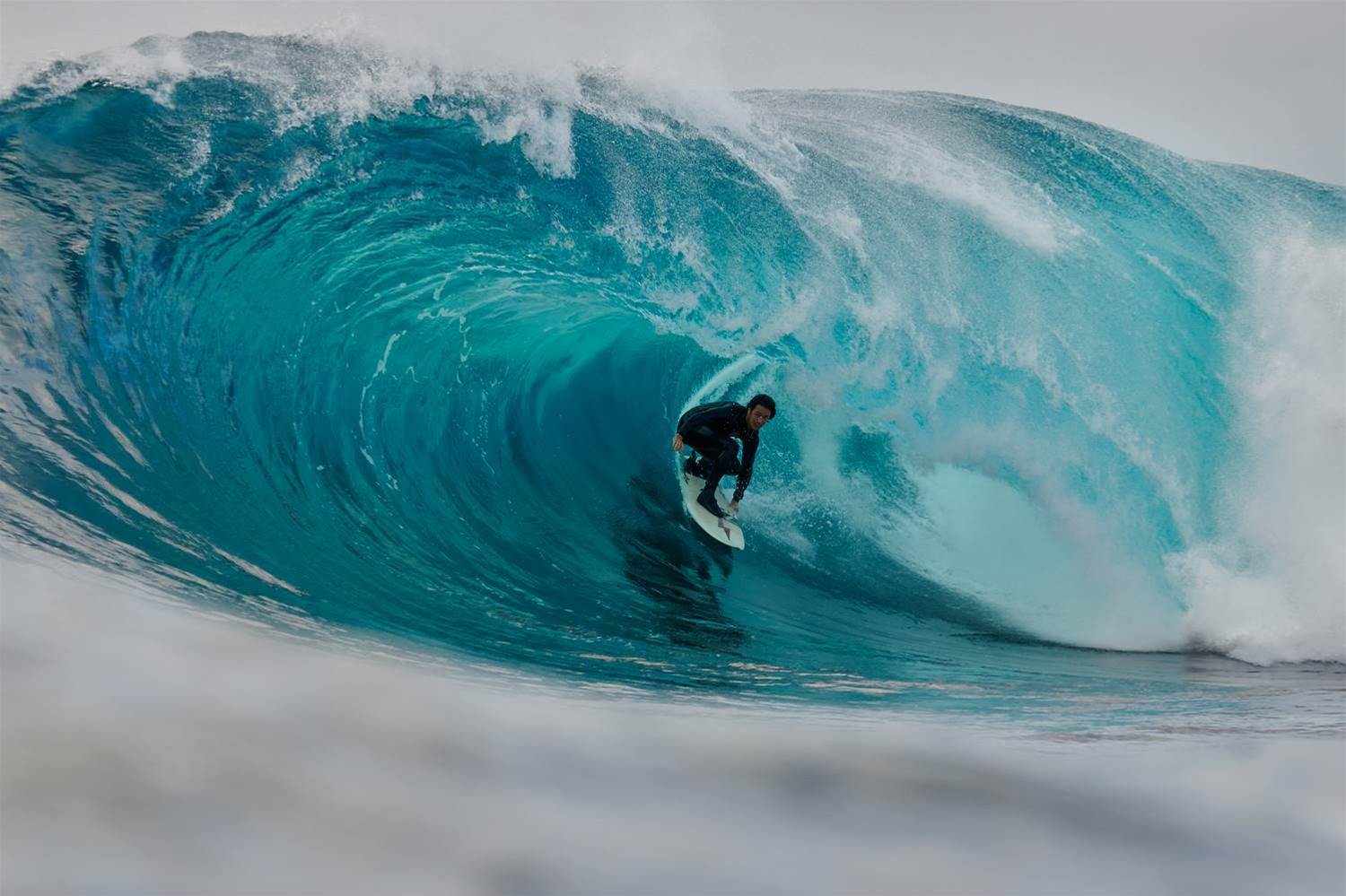 Josh is recognised as one of the best goofy-footers at Cape Solander, which is a super-challenging wave to ride backside.  Photo: Mitch Fong

Berit, who had been to Mex’ a couple of times before, suggested a couple of well-trodden tourist locales but Josh quickly turned her attention to a little surf town he’d always wanted to visit. “We need to go to Puerto Escondido,” he insisted.

A couple of days later they were walking the scorched sands of Zicatela beach with two months in Mexico stretching before them. Real Estate was cheap in COVID times and the couple locked in a stylish villa on the stretch famous for its giant, folding teepees. “We wanted to get our own place and play it safe because Mexico is not far behind North America in terms of COVID,” explained Josh over the phone back in Oz. While being mindful of social distance, the couple quickly slipped into a classic Puerto routine. Mornings were spent surfing until the wind came up. A big, western-style lunch was followed by some local exploring on the mopeds and an afternoon siesta. Once things cooled down in the afternoon they would emerge for cocktails and a taco dinner. Wake up and do it all again. “The place is like ground-hog day,” emphasized Josh in a positive tone.

Well aware that Mexico has a reputation for drug-inspired crime, Josh was quick to point out he never felt at risk of being caught up in the crossfire of a cartel war. “We had our wits about us because it is known to be dangerous, but that actual town (Puerto) is pretty mellow.”

Out in the water, Josh found himself shoulder to shoulder with a crew that included wiley locals, gung-ho Americans and resident pros. “I’m pretty sure I was the only Ozi in town,” chuckles Josh, a little chuffed by his unlikely presence in the lineup at Mexican Pipe, during a pandemic. 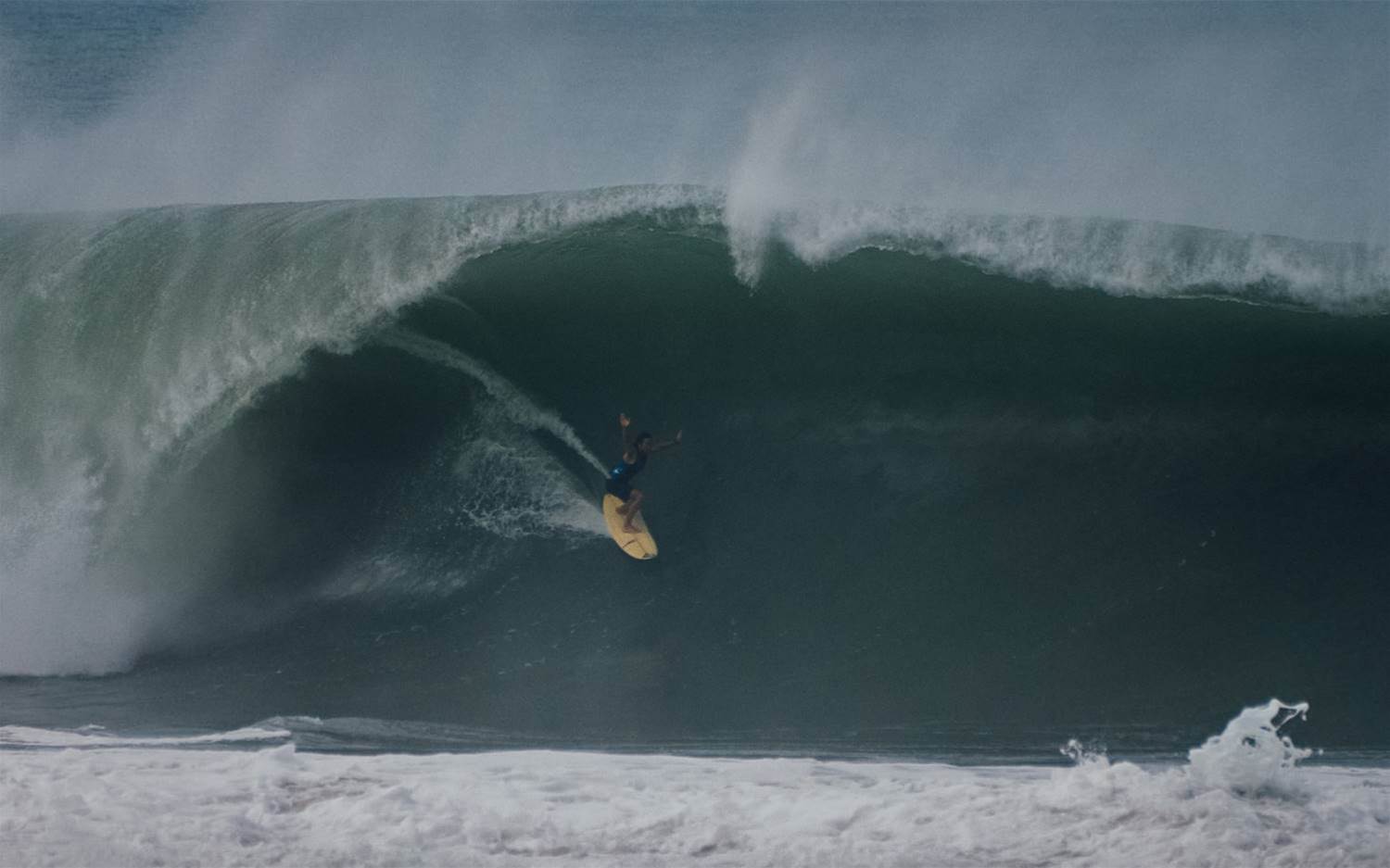 Josh, who is a serious east coast slab chaser and one of the backside stand-outs at Solander, soon became aware that Puerto cultivates a unique, adrenaline-fuelled atmosphere. “I loved it. Everyone there’s just psycho. There are guys who are fifty-plus who are psychos taking off on crazy ones with their own modified inflated vests… Everyone just wants the biggest craziest wave. It pushes the boundaries so much because everyone’s so hungry and going deeper.”

“I loved it. Everyone there’s just psycho. There are guys who are fifty-plus who are psychos taking off on crazy ones with their own modified inflated vests…"

Feeding off the zealous vibe inspired Josh to push his own surfing, but bravado was tempered by warning signs that disaster was only ever one, split-second away. “You see so much intense stuff go down there. There was one American guy whose board flung back from a stretched legrope and went straight into his eye. I think he can still see but he was so close to losing his eye… another Brazilian mate of mine rescued a bodyboarder who was about to drown. ” 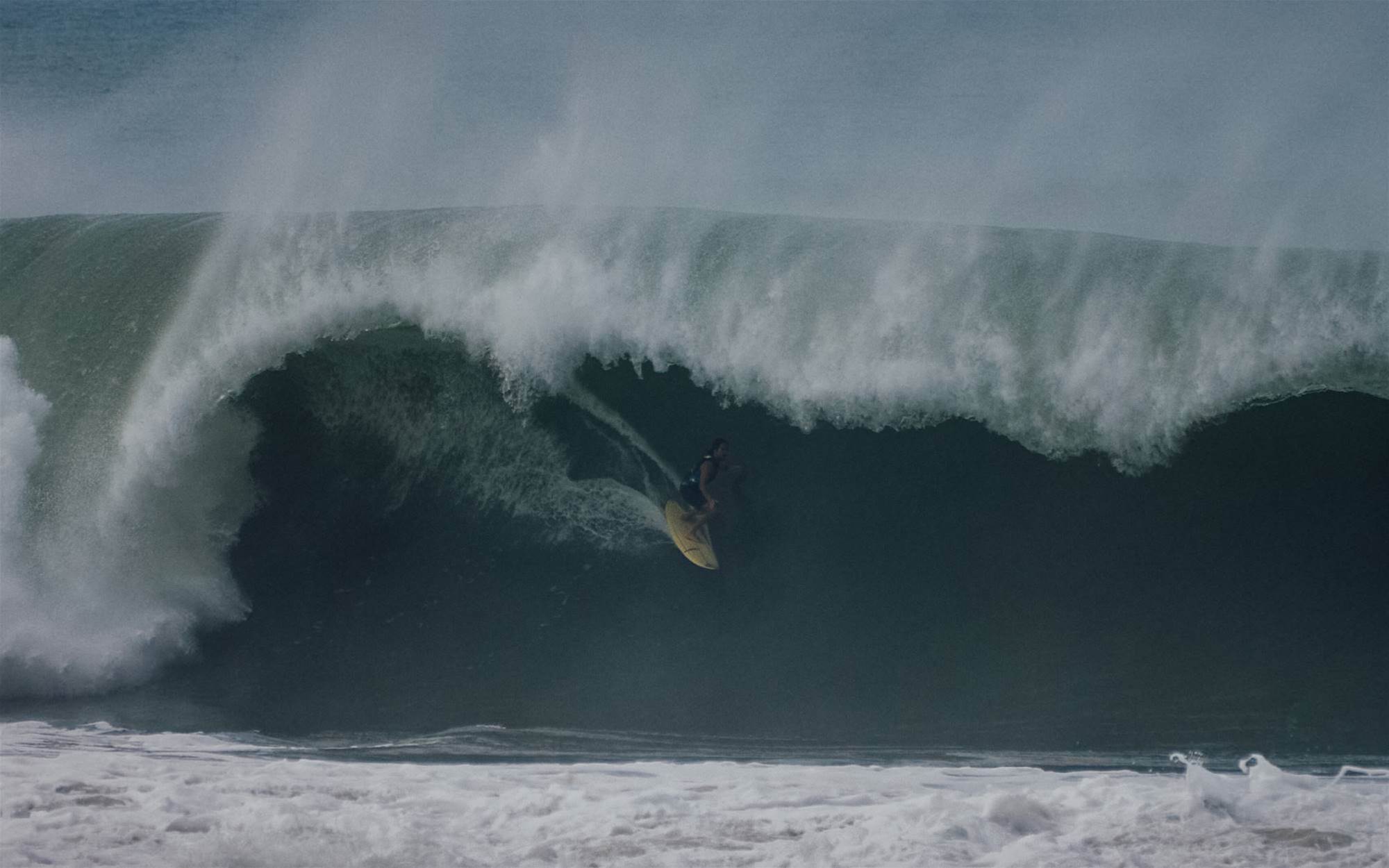 Same wave as above a few, critical moments later.

Puerto’s heaving pits, flash rips, and notoriously inescapable impact zones have inspired major debate amongst devotees about the merits of wearing a leggie. Many veterans are adamantly against being tethered to a big chunk of foam and fibreglass that can hit you or act like an anchor in the violent undertow. Others argue the legrope and the buoyancy of a board can help save you.

Josh followed the former’s advice. “I had a no legrope situation because I didn’t have a legrope big enough for that 8’6” and a lot of people said don’t wear a legrope… the waves break pretty close to shore and when you get pumped on one, you don’t want your board anywhere near you.”

Advice on boards and equipment was shared freely in a hard-core scene, but finding a slot in the social hierarchy proved a little difficult with the language barrier. “The Mexicans were cool but I just feel like I missed out on a lot of the more personal stuff because I don’t speak Spanish. I feel like you don’t earn their respect until you spend a lot of time there and you do learn a little Spanish… It’s a tricky place, it’s hard to get into that little clique."

Meanwhile, Josh found big wave aficionado Greg Long (former winner of the Eddie, the XXL ride of the year, and Big wave world title) to be refreshingly friendly. “Greg was really cool. Every day I saw him in the water and he made a point of saying hi and remembering my name.” Josh also went to school on Long’s Puerto approach. “The first week I was scratching around and wondering why I wasn’t getting a good one. I really learned from watching Greg. He just sits there and he sits there for hours and when the right one does come along he just makes sure that he’s ready to go… he definitely got the best one that I saw.”

Josh showed up with a pair of Annesley boards, his go-to 5’11” slab chaser and a 6’6” inspired by Curren’s fabled Black Beauty model. The Ozi goofy-footer, who is accustom to riding small boards at slabs with chip in take-offs, soon became aware of the need to pump up the volume at Mex Pipe. “I’d seen videos of everyone riding really long boards for waves that I didn’t think were that big, but when I got there I realised why everyone was riding a bloody big board… it’s not like the slabby waves here where you get a chip in off a boil or something. There the waves move so much faster, but they kind of stand up a bit less slower if that makes sense. It’s not so much of a square take-off… You need that board that’s long enough to give you the momentum to get you into it.”

While the 6’6” steered him through hollow chambers on the small to mid-size days when a ten-fifteen foot swell pushed through he borrowed an 8’6” and wrangled an old wake-board vest. “Even though I didn’t get the wave that I really wanted, it was just a really cool experience being out in that energy.”

When the world settles down again Josh will return to Puerto, better equipped, better prepared, and perhaps with a little more Spanish lingo up his sleeve. However,for now, he’s happy to be out of quarantine and back at home in Maroubra, running his own roofing business, 'Kuey’s Roofing'. Between waves and siestas in Mexico, he and Berit managed to get online and resolve Berit’s visa issues so she is back in Oz by his side. Life is good for the goofy-foot, tube hound who still receives product sponsorship from Alkali fins, Annesley surfboards and Adelio wetsuits.  And as 2020 comes to an end he can be content in the knowledge that he is one of the few Australian surfers who can boast that they had a wild, international surf trip in the year of COVID. 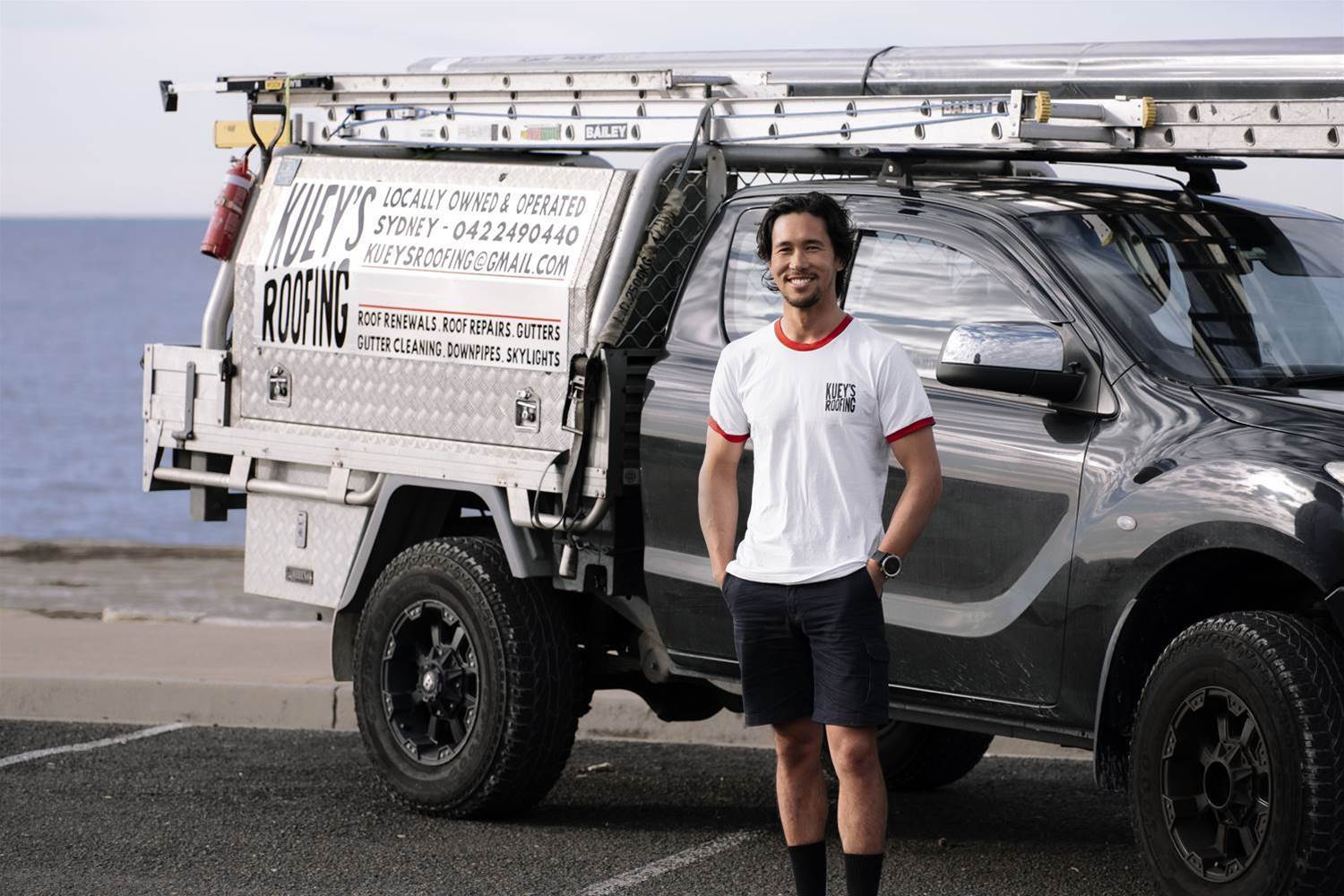 Josh Ku in work mode, back in Oz.