Plus, Mikey Wright and Leo Fioravanti go one apiece in their best of three surf-off.

Now, I’ll be the first to admit that the absence of professional surfing over the last 12-months hasn’t exactly left a gaping hole in my soul that can only be filled by men and women water-dancing in coloured rash vests. However, there’s something about competition at Pipe that’ll keep me glued to the screen all day.

In fact, it doesn’t even take a contest. The last handful of days at Pipe have been big, heavy and pretty much firing. Everyone in town for the big show, along with all the regular Pipe crew have been out looking for their piece of the action, and my browser has been pretty consistently locked onto the explore.org Pipeline Cam which is available for free on YouTube. If you’re not across it, it’s a live cam of the Pipe lineup, and sure the angles can get a little funky at times, but it’s the best way to check out the action without having to pay.

It was a promising teaser for the main event and as the day of the Pipe Invitational dawned, expectations were high for a day of top-shelf Pipe theatrics. Sadly, there was something a little off at Pipeline this morning, and the action stuttered and started as the competitors struggled to adjust to a lineup that Ross Williams noted had shifted more toward Gums.

However, as the tide dropped and the day progressed, Pipe became increasingly groomed, until sometime after lunch, as it does at Pipe, the switch flipped and it began to fire. This culminated in an epic final, which featured Josh Moniz, Miguel Tudela, Ian Gentil and stylish Hawaiian goofy-footer Eala Stewart.

In the end it was the experience of Josh Moniz that came to the fore, the Hawaiian bagging a pair of 9.60’s on two first-reef monsters, which the Hawaiian threaded with the control and poise that can only come from many, many hours spent paying dues at this particular patch of reef.

No one except Miguel Tudela came close to matching the Hawaiian. The Peruvian had a chance to threaten for the win when he swung into the heaviest looking wave of the day. Knifing under an anvil of a lip he drove straight and hard as the tube enveloped him. It looked for all money like he was coming out, but the wave was so square it simply hoovered him back into the abyss. The judges awarded him a mid-seven for the attempt, enough for second place and earning him a start in the Pipe Masters along with today’s winner, Josh Moniz.

The undercard of today’s Pipe Invitational featured the long-awaited surf-off between Mikey Wright and Leo Fioravanti. Originally announced pre-covid and supposed to happen during the abandoned Corona Pro at Snapper Rocks, it was now happening at pumping Pipeline in December, a much better venue for the spectacle.

Adding to the drama is the fact that both surfers have a bit of hoodoo surrounding Pipeline. In 2015 Leo broke two vertebrae and tore a multitude of tendons while competing in the Volcom Pipe Pro. While Mikey almost lost big brother Owen to a brain injury, sustained after being mowed down by a clean-up set at Pipe.

Looking at the way the two went at it today, you wouldn’t know it.

The first heat in the best of three battle was won by Mikey, by less than a point. 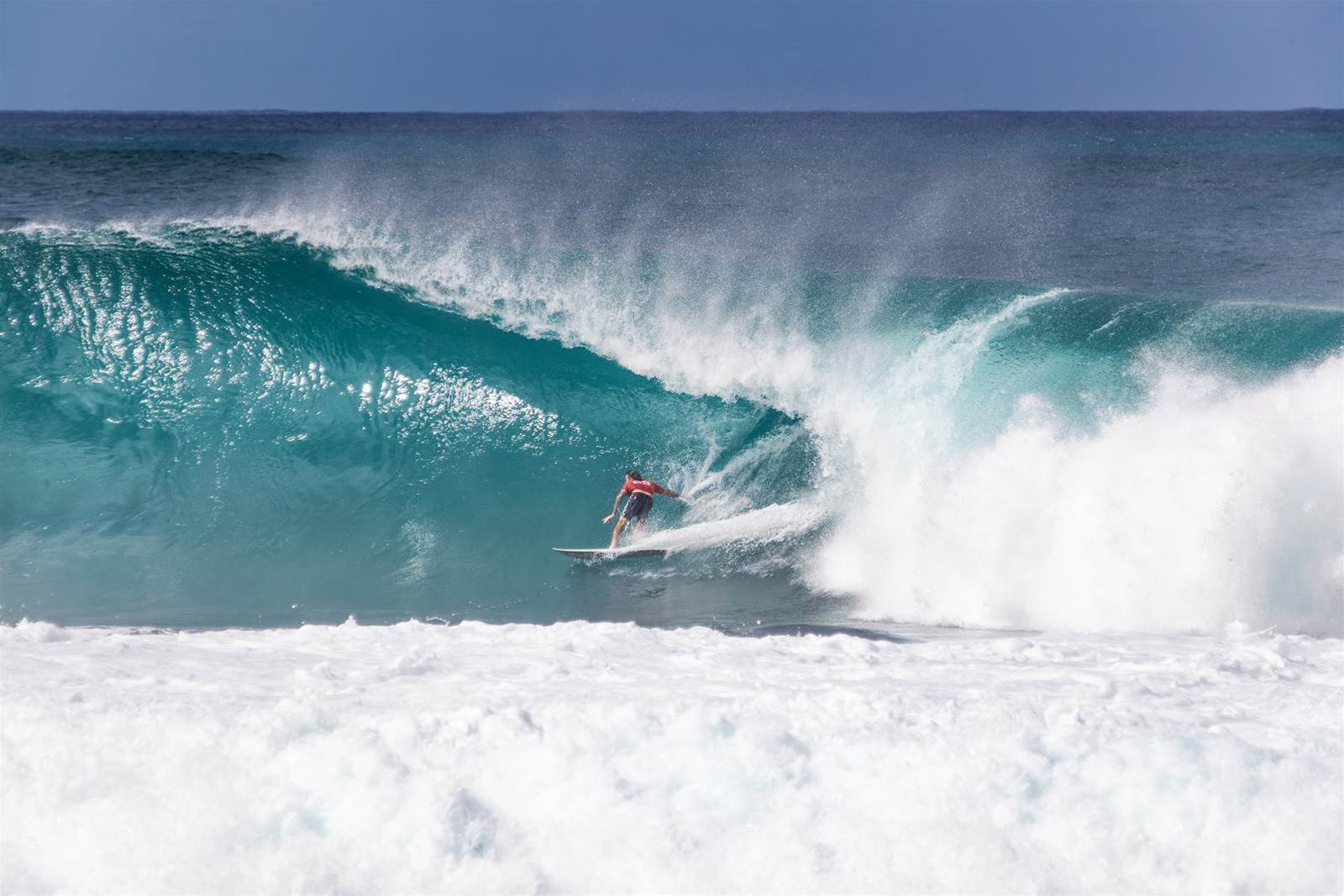 Mikey Wright, on the way to winning the first heat in his best-of-three surf-off with Leo. Photo: WSL

The second round was won by Leo, after Mikey, who banked the best score of the heat with a 7.17, couldn’t find the two-point ride he needed to cement a place on the 2021 tour. A last chance Pipe wave did come the Australian’s way close to the buzzer, but it stretched out toward gums and swallowed Mikey whole.

After the heat Leo quipped, “It’s my birthday and I think him not coming out of that last one was my birthday present.”

The third and deciding heat will run during the first day of competition at the Pipe Masters, which is looking like it will be tomorrow.