“I’m just so happy and relieved to finally win an event again!”

Finals day was going to be a big one at the Billabong Pro Tahiti. Not in the traditional surfing sense, but a logistical one. Despite a valiant effort on its behalf, The Pacific ocean had steadily been deteriorating since the first day of the waiting period, and the race was on to get this thing finished while there were still waves to ride.

The day began in miserable conditions. There were still waves, but they were hidden under a tropical rainsquall that blanketed the lineup. Things were looking dicey. But as is always the way in the tropics, the weather can turn on the lid of a Hinano beer bottle, and before long the rain cleared, the wind shifted and finals day would offer an enthralling climax to an event that offered the direst of forecasts.

We won’t dwell on the earlier part of the day, but just incase you need to know, in the quarters Medina iced Owen Wright with the only 10 of the event, Andino dispatched Dantas, Jordy and JJF dueled for the yellow Jeep leaders jersey, which Jordy will now wear at Trestles, and Julian put an end to rookie Joan Duru’s run.

Now, the semifinals. The first of which pitted Kolohe ‘Captain America’ Andino against Gabriel Medina – the Brazillian Blood Hound – named for his ability to sniff out a bomb in any part of the lineup.

The two jostled for position for 10 minutes, clashing arms and rails, each trying to leap frog the other for the inside. Finally Kolohe pulled a crafty duckdive that achieved the goal, but when he emerged victorious from underwater, Gabby was already streaking for the real takeoff spot and straight into a keeper score – the classic bait and switch. Advantage and eventually victory to the bloodhound. 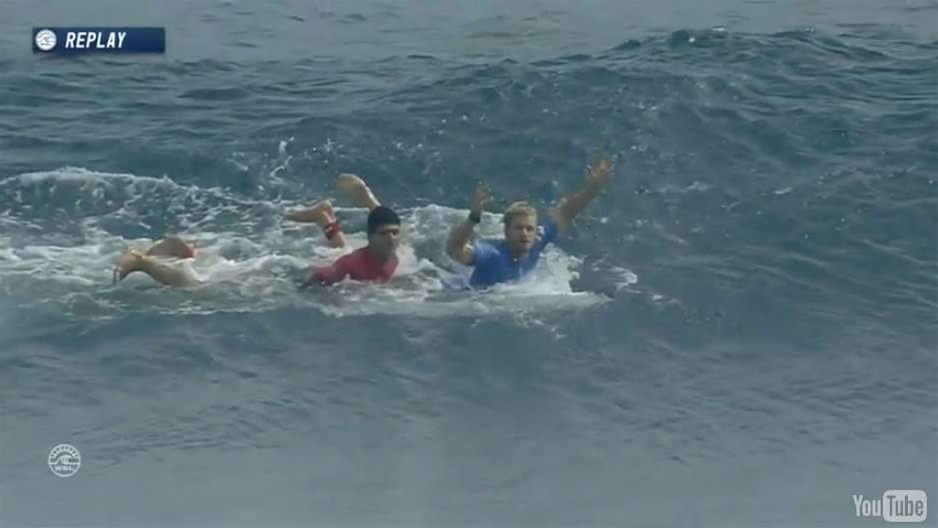 Whether you agree with it or not, you have to admire the tactical precision Gabby displays in his heats. He’ll fight tooth and nail for the inside, making his opponent singular in their belief they need to take it off him, but when they do, he plays an under priority game that can make a fool of his foe. It would be infinitely frustrating to surf against, just ask Captain America.

The second semi between Julian and Jordy was about as far removed from the intense and action packed first as you could get. It seemed the tap had finally run dry.

Both Julian and Jordy began their quest for a finals berth with closeouts. These two deserved a better heat, but you’ve gotta play the hand you’ve been dealt. It was Julian who first chanced his by going to turns on his next wave. It seems the judges were on the same page and rewarded him with a 7.33.

Jordy didn’t get the memo however and stuck to the tube. Unable to wipe-off enough speed on one for a 2.50 and squeezing out of another for a 4.83

Ironically, it would be Julian who would find the best barrel of the heat for a 6.93 and a spot in the final.

Medina Vs. Wilson – it’s always a match up with feeling.

These two have a lot of history, which all began way back in 2012 when Julian bested him in the final of the Rip Curl Pro Peniche. Gabby didn’t see it that way and famously leaked a few tears before leaving the podium prior to Julian receiving his trophy. Gabby was young. He was also crucified in comment boards around the globe for his behaviour. I believe he learnt a lot from the incident and it was aruably the seed that grew into his unstoppable run to the title in 2014.

But in that glorious year it was again Julian who stuck his finger into Gabby’s cake, taking a big chunk of icing and shoving it into his smirking mouth by winning the Pipe Masters on the same day Gabby took the title.

You just know which trophy Julian would rather have on the mantle though.

Now here they were again, ready to go at it. This was bound to be a battle. Both surfers entered the lineup, the countdown began, the tension was palpable, Strider pressed Jordy for his thoughts on the final from the channel as the hooter sounded, both screeching with excitement as a set approached and … the WSL inexplicably cut to an ad. What. The. Fuck.

In what sport is it ok to cut to an ad at kickoff? Who is pushing those buttons?

Once the coverage finally resumed Julian and Gabriel were shoulder-to-shoulder scrapping, each trying to bluff the other into taking off. Medina was never giving up the inside, not in this heat. Two waves in a row Medina blocked Julian. Julian gesturing to a tower that wasn’t listening.

Pottz was salivating into the mic at the display of salt-water slap and tickle, but me; personally, I hate that shit with the fire of a thousand suns. It’s a waste of fucking time. Flip a coin before you paddle out and ride more waves.

By the time it was over, ten whole minutes of the final had evaporated. Medina eventually scrapped his way into an absolute bomb, but the jostling had put him slightly too deep and a 10 went begging by centimetres.

The next two efforts from both featured crumbly tubes to turns – Julian getting the better of the exchange with a 7.00.

Medina then stroked into the first girthy cylinder of the heat, forcing the judges into the excellent range after Julian’s previous ride, and ending up with a tidy 8.67 in the bank.

The bloodhound then got to work, somehow sniffing out a glorious grower under Julian’s priority for a 9.73.

Julian was now in combo. Judging by previous heats, this one had already had its fair share of good waves and it looked all but over for Julian. 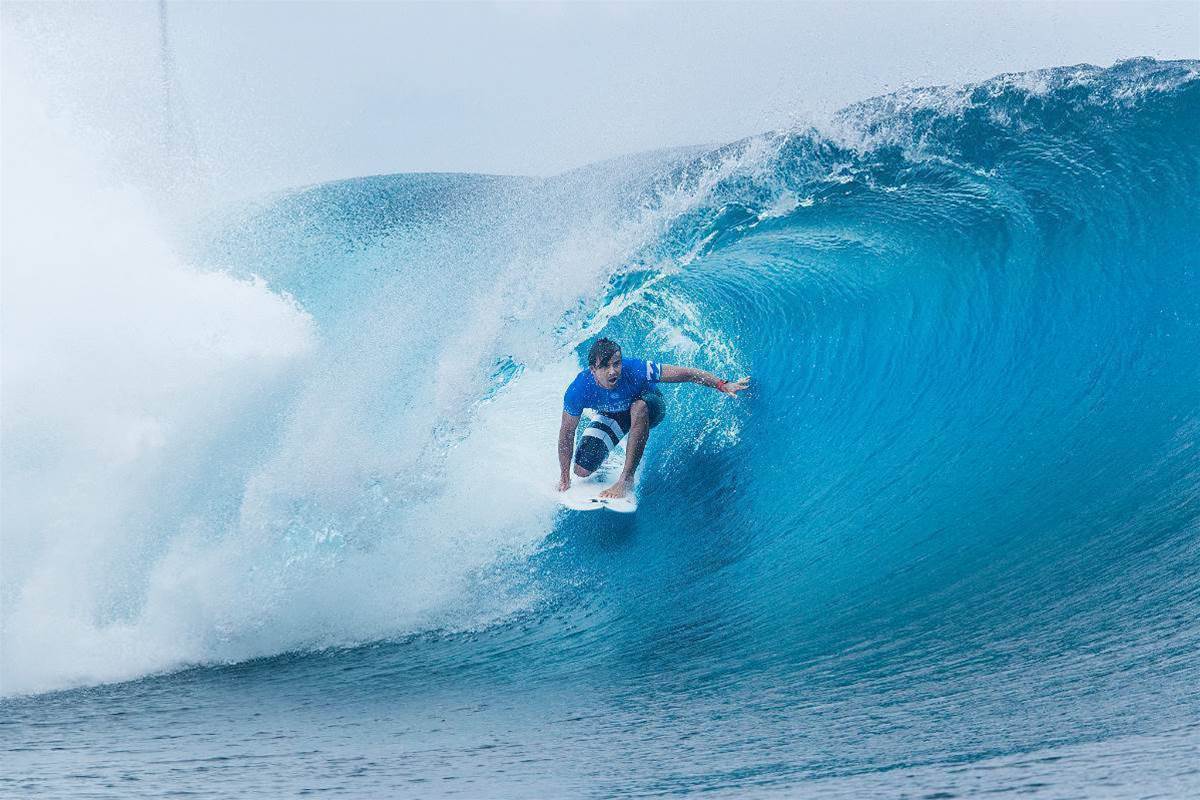 Cue another ad break from the WSL, and of course we missed the most crucial part of the heat. Julian Wilson now had a mysterious 9.23 in his scoreline, but no one knew how. It was minutes before a replay was finally shown which delivered the explanation – an incredibly late drop from Julian followed by a deeply packed Tahitian cigar. Would’ve been nice to see it happen live.

Before the WSl could cut to another ad, it was Wilson again who packed a beautiful west bowl, emerging post-spit with a miraculous 9.73 and the event win.

“Such a good final!” Enthused Julian to an excited Rosy once back on the boat. “I’m pretty speechless, I’m pretty worn out but I’m ecstatic.”

“I’m just so happy and relieved to finally win an event again.”

Not a bad way to sign off on a comp with such a dire forecast. 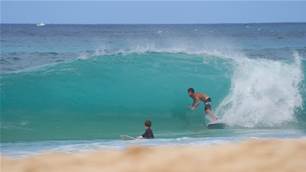