Catching up with Kai to chat life and big wave surfing.

Craig Jarvis: You do everything. Do you have a favorite board riding discipline?

Kai Lenny: I don’t have one favorite discipline. I decide what to do depending on what the conditions are. I consider them all surfing. They’re just different tools for the job.

Great win in Mexico. You must be stoked.

When I won I was over the moon! Its something that I’ve been working towards for a few years now and after last year as a rookie on the BWT I learned a lot. Winning has given confidence in my ability to push even harder to improve my skills. Puerto is such a unique big wave compared to almost all others, there is a ton of current moving and typically during free surf sessions you may wait a couple hours to catch the perfect ride. Its a perfect spot but technical to say the least. In a heat you need to catch two good waves in a relatively short period, so throughout the final I was getting beating after beat down trying to ride the biggest wave I could that was makeable. Up until my last winning ride in the final minutes I had been waiting for this perfect wave all day and it couldn’t have come at a better time. Dropping in and seeing the light at the end of the tunnel, I was more stoked that I made it then anything else! I wasn’t sure it would be the score and when I found out it was a rush of excitement that came over me.

You beat a lot of very good big wave surfers in Mexico. What do you attribute your event success to?

Every heat is hard because the best big wave surfers in the world absolutely charge. My goal was to catch two of the best rides I could and ride them the best I could. Pretty simple, and it worked! Even in the final I really stuck to my game plan and trusted in it. 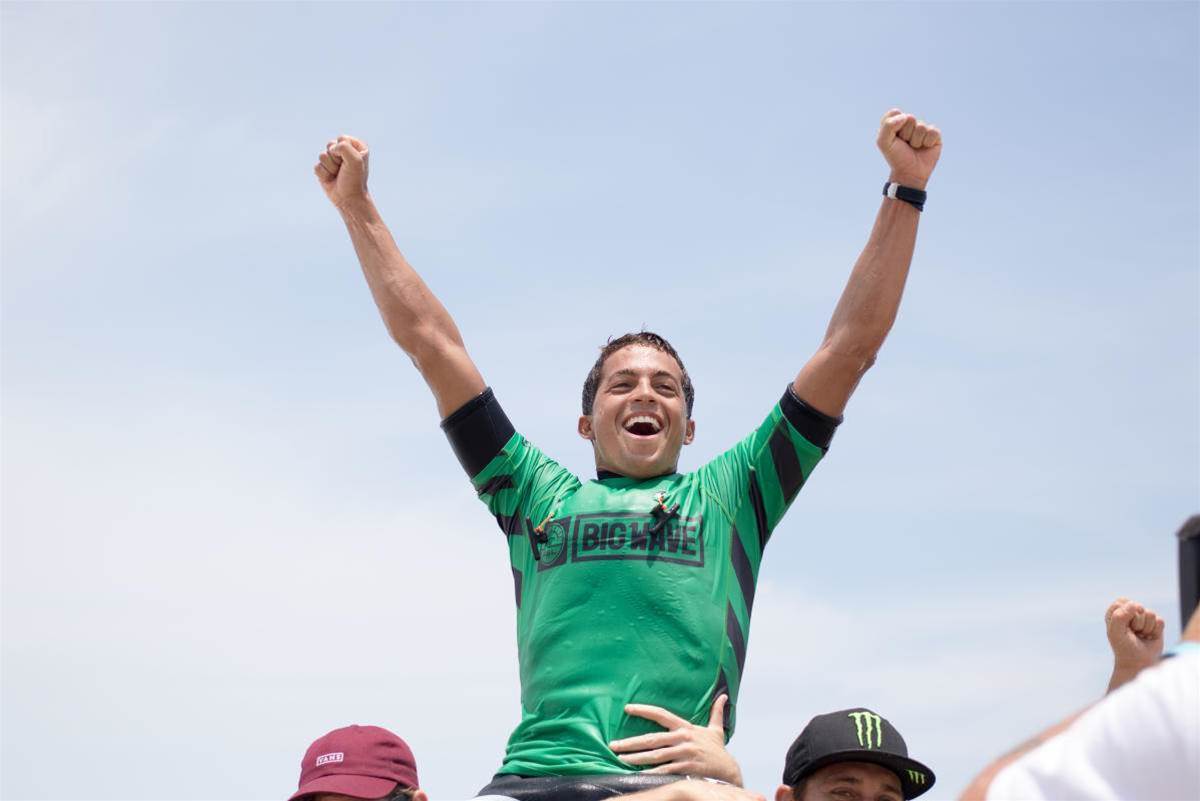 Which surfers stood out for you in Puerto and why?

There were many standouts. A couple that I got to see first-hand in my heats were Billy Kemper, Tom Lowe, and with no surprise Jamie Mitchell, who was charging even with a broken sternum.

I think everyone’s goal on the big wave world tour is to win the world title. The things you have to go through to win a comp and just be in the mix is gnarly. I absolutely want to win more events and world titles. Winning Puerto has broken the ice in a sense, now that I have done it once, why not try and do it again! I love surfing big waves and competition, so I’m committed to it as long as I’m having fun.

Out of the three big wave tour venues, which is your favorite venue and why?

Without a doubt it would have to be Peahi. It’s my home spot, and my favorite wave in the world. It is one of the most, if not the most perfect big wave in world. I could just watch it for the rest of my life its so mesmerizing.

Tell us about the scariest big wave situation you have ever been in?

It would have been the second time I ever had a minute long hold down out at Jaws. I remember it being really big and I decided to try and push myself really hard. I went to the north peak to try and get a wave that would allow me to back door the west bowl. I committed to a wave that was walled out to the channel and when I negotiated the drop I found myself between two converging peaks, a huge close out. I had to straighten out and the weight of what felt like the world landed on my shoulders. It flexed me so hard I was on the bottom hoping my inflation vest would bring me to surface. Even with the vest filled to full capacity of air it didn’t seem to help, felt like I was never going to coming up. When I did surface the next wave was right on my again and the process repeated itself. .

What is in the future of the Big Wave Tour?

The future of the Big Wave Tour in my eyes will continue to grow and spark more mainstream interest. A larger tour with more tour stops is inevitable I believe. The insane level will continue to go up and the unimaginable will be ridden as if it were small waves.

What is the best thing about surfing right now?

The best thing about surfing right now is that the sport hasn’t hit any plateau, the maneuvers are getting more technical; the big waves being ridden are gnarlier and more critical then ever, and there still seems to be a lot of growth with no end in sight. I love that about surfing.