"It all comes down to attitude."

With Dusty Payne chasing re-qualification at the Vans World Cup, the fiercely loyal Volcom team were out in force to support their bearded brother from Maui. Kai Garcia (aka Kaiborg), the hulking spokesperson for the Volcom team was one of Dusty’s most vocal supporters throughout the day. Even the typically stoic ‘Borg couldn’t help but get openly excited each time Dusty progressed through a heat. According to ‘Borg’ they’d told Dusty he needed to win the event to requalify, just to ensure he was in the right headspace. Dusty ultimately finished second in the contest, which was more than enough to secure his position on next year’s World Surf League.

Below Kai Borg explains what it means for the Volcom team to have Dusty back on tour and why he feels like Dusty was able to bounce back.

What does it mean for the Volcom team to have Dusty back on tour?

It means everything. We went from zero and now we’ve got another hero back on the tour. It’s been an emotional two events. It’s been a rollercoaster because he had a rough year – a rough four years. You know he put himself in a hole and he dragged and clawed his way out of it … Shook it all off and recalibrated and figured out what has to be done … It all comes down to attitude.

So you’d say that it’s a change in attitude that has turned it all around for him?

It looks like he’s been training pretty hard also?

Well that all goes hand in hand. He’s been training like an animal for the past year. He’s learned to let things go. You can’t carry any baggage around with you you’re just fucking around with an anchor and he’s figured it out, it’s a blessing.

We’re looking forward to seeing his second shot at the top tour and hopefully it goes well.

I think he’ll be alright this time … I’m pretty sure I’m positive. 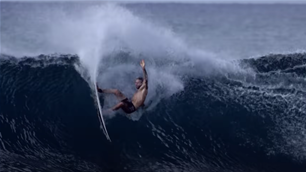 Watch: Mikey Wright in 'The Rock'