The Corona Bali Protected finishes in perfect waves at Keramas.

The waves were absolutely pumping, the crowds were screaming, and the two finalists were on fire. Kanoa Igarashi had been consistently improving throughout the contest, after starting off really slowly at the beginning of it all. His first proper scoring ride in the final was quite incredible. With the Japanese flag waving furiously in the background, he executed a series of high-risk floaters, hooks, carves and tags all the way through to the shorebreak - fast and with a trace of old school. The 21-year-old awarded an excellent score of 9.10 and the lead.

Flores had yet to put a decent score onto the board by this stage, living deep in combo-land, not that this would worry the Reunion surfer much. In waves of this quality it’s easy enough to get two pocket sevens and get back in the game within a few minutes. Flores also has the reputation of buzzer-beater heat wins, often clinching victory in the last seconds. He soon picked up a bomb, and was awarded an excellent score of an 8.93 for a series of searing power turns on the rail, and it suddenly became real. Pottz, for one, was very doubtful of the score comparison, stating very clearly that Flores should have scored higher than Igarashi on the encounter, and Pottz chewed on it, not convinced, not buying it. Strider agreed however, proving that the commentators are now regularly questioning the judges and their decisions, which is cool. 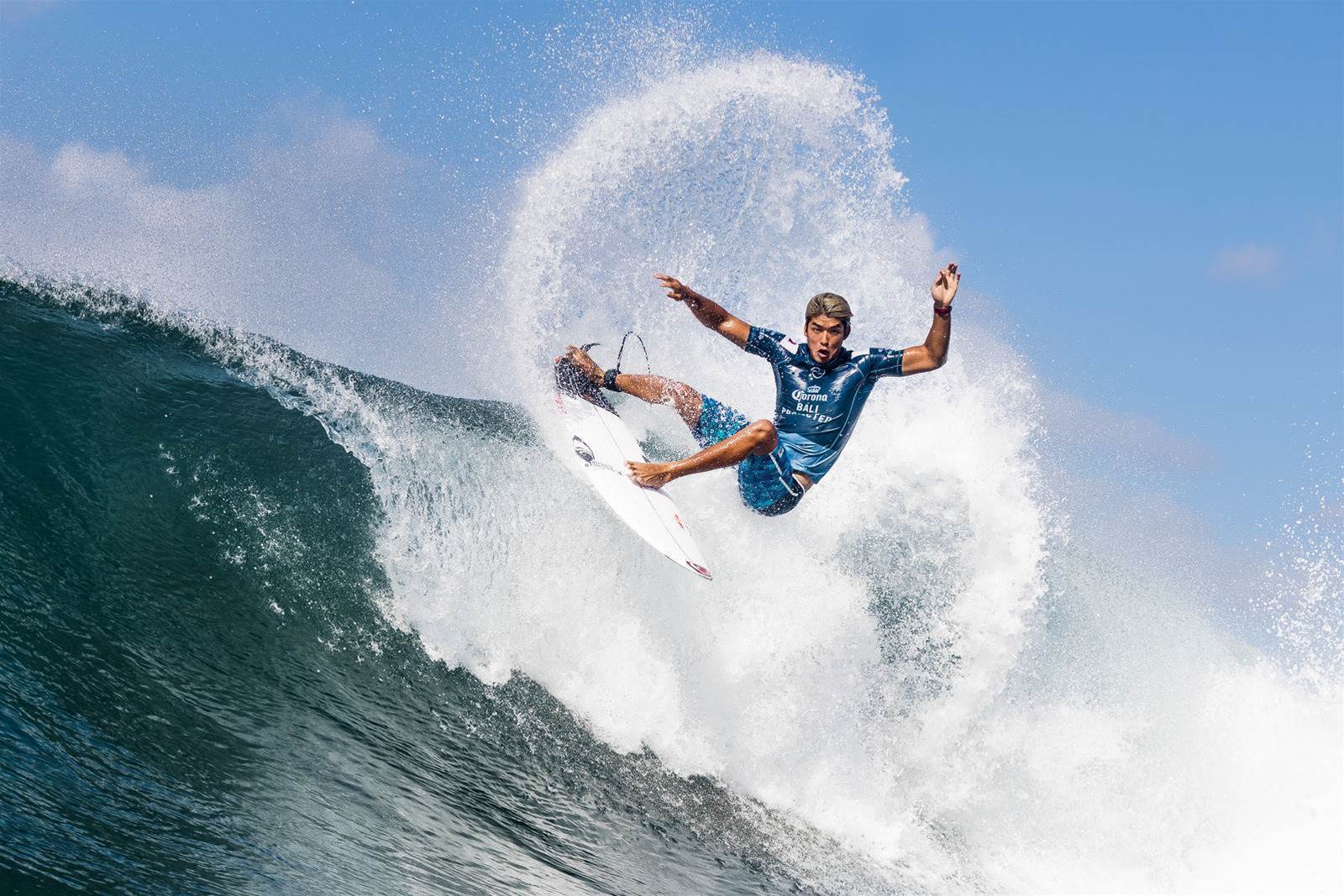 Kanoa's down the line flair has been a highlight all week, and today it took him to victory. WSL/Dunbar

Flores is a competitive lion though, and needing a 6.18 he threw it out there with a couple of massive gouges and a finish tag on the closeout as an answer for the score. He fell short, with a minute to go, and snuck into a barrel on the buzzer, but it also wasn't enough, and an ecstatic Kanoa claimed victory in the pumping surf of Keramas.

“I really can’t believe it,” said a beaming Igarashi in the water to Strider. “All the hard work I did, it all makes sense. I’m going to remember this for the rest of my life. I had a really good week, and when things are going your way you’ve just got to run with it.”

The result saw the Japanese surfer climb up to number two on the Jeep Leaderboard, with John John Florence remaining at the top spot, and Italo Ferreira in the number three spot.

Steph Gilmore put on an incredible performance to take the win in the women’s event. Coming up against Sally Fitzgibbons, Steph was in cruise mode throughout, getting a couple of decent waves as well as a whole bunch of short-and-sweet rides but nothing special.

Similarly, Sally had a mid-range 5.50 score in the bank, and a small score 1.5 as a backup, as the best waves seemed to dodge the two finalists in the excellent-looking lineup.

Towards the end of the heat however, the magic happened, with Steph picking up a bomb. After a first clean, open-faced down-carve, Steph stalled and pulled into a throaty-looking barrel, with a foam-ball surging towards her. Miraculously the wave totally yawned open for her, and she came flying out of an excellent tube to tag the closeout with absolute venom. Five judges dropped perfect 10-point scores for the dream wave, and Steph was the winner with a wave she will remember forever.

“I can’t believe it,” said an emotional Steph on her win. “I couldn't see a thing in that barrel. I knew it had a good look to it, it had such a perfect line, and I was just so stoked to come out.”

All the men’s quarterfinals were close in the fast improving early morning surf, and there were no easy routes through. M-Rod took out Carmichael in an exciting heat, as the waves started looking good and cleaning up. The powerful Carmichael needed one more somewhat bigger wave to unleash some power. Similarly, when Jeremy came up against Andino, there wasn't much in it, and while Brother has been looking excellent all event, he didn't do enough to keep off the frothing Frenchman.

Everyone wanted to watch the quarterfinal ‘Superheat’ between Slater and Toledo, with waves grinding through and excited fans screaming on the beach. The waves opened up for Slater, and he found some great barrels to open-faced carving cutback combos, while Filipe couldn't find what he needed, whether in the tube or in the air. It was cool to see the legend heading off for the semi-finals.

The first semifinal was anybody’s heat, with Michael Rodrigues looking pumped. Jeremy Flores was rampant however, picking up the good barrels and looking extremely comfortable in the firing surf. Flores went into the lead fairly early, and started having fun, looking for the best waves and riding a couple of nice barrels. M-Rod had everything in his arsenal to get the lead from Jeremy, except for a final wave that is. He missed one good set wave and final chance of a score at the end of the heat by being well out of position, and the time ran out before he could get a final wave, and he bowed out.

In semifinal number two, we were all hoping for a fairytale story of Kelly making the final, and he started off getting a few good ones, forcing his way through one double barrel for his best score of 7.17, but Kanoa, despite some jittery moves in the beginning, started to get it together after the midway mark of the hear to bank a 7.67 and a 7.4 to take the win from the 11 time World Champ. 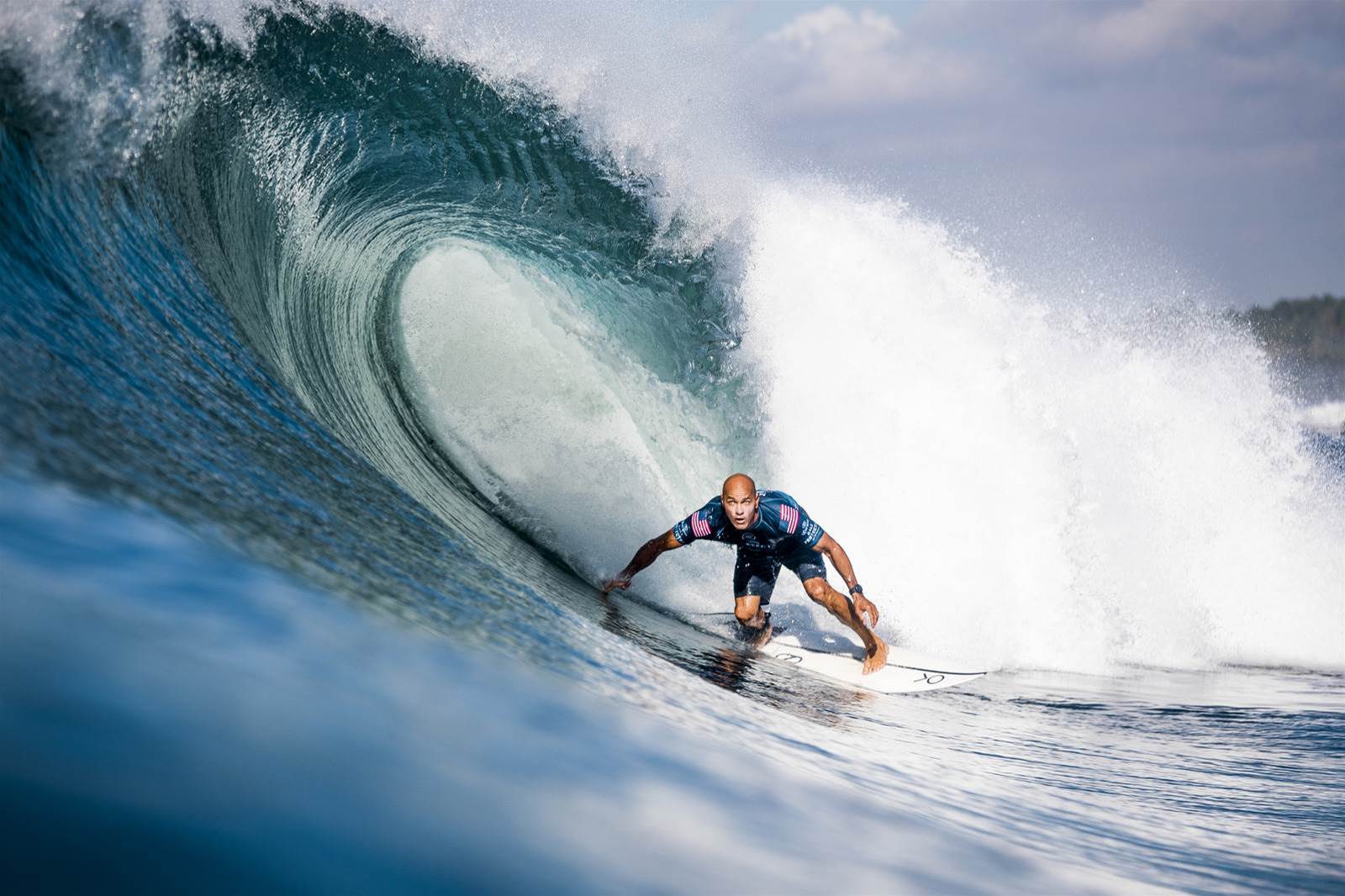 If this comp proved anything, it's that if it's tubing Kelly can still win ... easily. WSL/Dunbar

“It seems that sometimes priority works against you here at Keramas,” said an upbeat Kelly after the heat. “I ended up giving him his good one under my priority and I thought that if I didn’t have priority I’d take that thing. I didn’t think my scores through the event were exceptionally great, and I don't think I surfed awesome on any particular wave, but I thought I competed really well with what I had. I got past Filipe and Michel and Owen. Those were pretty big heats.”

Kanoa’s final performance against Flores was inspired, and he showed such maturity and variety, holding out to the end, but it was Steph who reigned over the day with the wave of the event.