At the Shoe City Pro in Huntington Beach.

In-form Californian youngster Kanoa Igarashi has picked up where he left off at last year’s Pipe Masters by winning the opening qualifying series event of 2017, the imaginatively named Shoe City Pro.

Earlier in the day Igarashi accounted for exciting San Clemente talent Ian Crane in the semi-finals, putting an end to the high-flying goofy-footer’s run with a dominant performance that saw Crane unable to break free of a combination. Nakamura caused an upset in semi two, taking out ex-CT surfer and Tour Notes funny-man Brett Simpson with an 8 in the later stages of the heat.

For Simpson, the result still comes as a positive start to the season, as the stylish natural-footer seeks to regain his spot on the championship tour after falling off at the end of 2015.

‘The last couple of months I've just focused on getting better and getting equipment right,’ he told the WSL. ‘The waves have been small but I've been surfing a ton and I feel good.’ 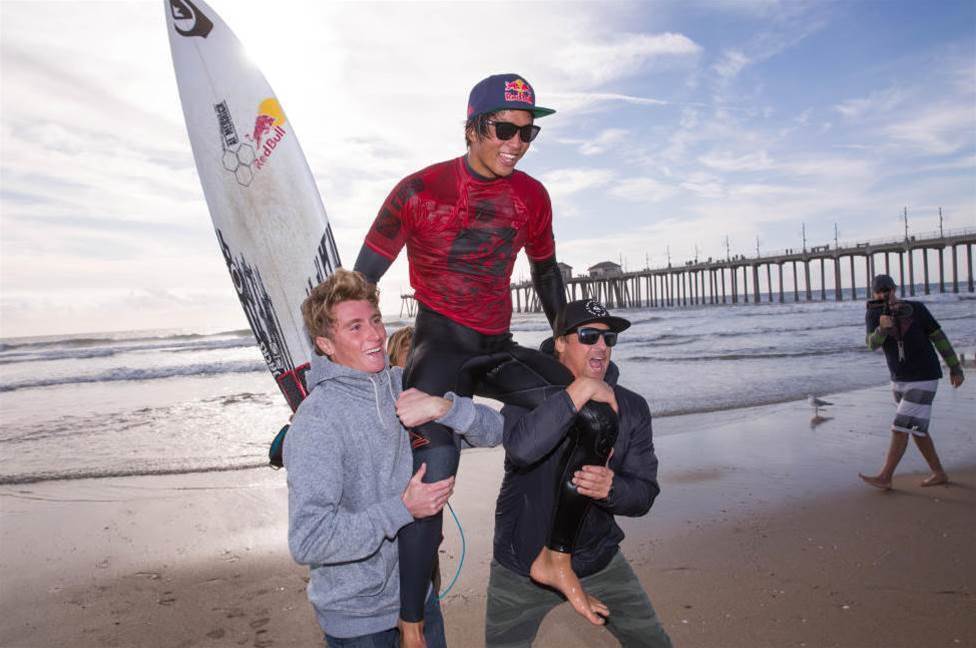 Does this victory signal big things from Kanoa this year? Photo: WSL

Despite only being a QS1000, the win for Igarashi shows good signs for the young Japanese-American surfer’s sophomore year on the Championship Tour, where he’ll be looking to improve on last year’s 20th place finish by cracking the top ten. After a somewhat uneventful rookie year, the tour’s youngest competitor found his feet at the last event of the 2016 season, putting on the kind of performance at Backdoor that left a lot of onlookers reassessing their opinions of the then nineteen-year-old. Following big wins over Jordy Smith and Kelly Slater in the quarters and semis respectively, Igarashi fell short of claiming his first ‘CT victory by just one spot when he went down to Tahitian heavyweight Michel Bourez in a wave-starved final.

This year he’ll will be joined by fellow youngsters and Quiksilver stable mates, Leonardo Fioravanti and Ezekiel Lau, and with such close friends beside him, it’s bound to bring another level of confidence to the kid’s already formidable contest act.

‘This year I really want to step it up and come in hot to show that my last event at the end of the year wasn't a fluke,’ Igarashi told the WSL recently.

With a win here in his backyard, he certainly looks to be following through on his intentions.