Amidst the surfing action the omnipotent Slater didn’t miss a thing in the press. 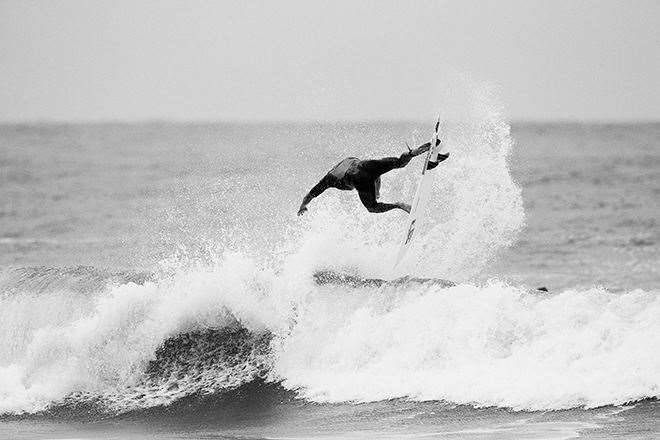 Despite dominating his heat over Bede Durbidge, Kelly Slater was in a fiery mood when he entered the post-heat media scrum. Once his live TV obligations were fulfilled he used the opportunity to take aim at a journalist who had written a story for The Australian. “Who is Will by the way?” Slater asked with a venomous tone, as the media gaggle surrounded him. From somewhere up the back a voice responded reluctantly, “Ah, that’s me.”

It was a heavy moment – the situational equivalent of a headmaster calling out some kid for a dressing down in front of the whole school assembly. Slater proceeded to go on the attack. “What was that piece of shit you wrote about me this morning? Saying that I was the classic example of the modern performance-enhancing, doping athlete… What was that crap?… That was bad writing.” Clearly disgruntled, Slater insisted he would take the test all year long while the journalist, Will Swanton, was at pains to defend himself. Slater wasn’t having a bar of it at first and turned his magnetic focus back to the rest of the media.

Slater’s verbal attack sent a clear message to the rest of the microphone-wielding scribes – his eyes are everywhere and he intends to make everyone stand to account for what they have said or written. To his credit, Slater stood with Swanton after the media scrum had cleared and allowed the embarrassed journalist to explain himself.

The quote, which Kelly took offence to is below and appeared in Will Swanton’s editorial in the Australian on March 11, titled “Drug Testers Swoop on pro surfing circuit.”

“At 41 and still ranked No 2 in the world, Slater would appear to match the profile of a textbook doping suspect.”

It seems Kelly took the quote as a direct implication that he was likely to make use of performance enhancing drugs to stay at the top of his game. In truth Swanton, who has written extensively on surfing for papers magazines and books, was probably using Kelly as an academic example rather than suggesting Kelly was doing anything suspicious. However Kelly definitely took it the wrong way. The link to the full article is below; it outlines an official drug test that took place at the Quiksilver Pro in the last few days and makes for interesting reading in any case.  The Australian/article

It was the second time during this contest that the issue of drugs in surfing had proved highly provocative for Kelly. Last week Kelly was quoted by a journalist in the Gold Coast Bulletin as saying that recreational drugs were “rampant” in surfing. Kelly later made it clear that this quote in no way reflected the sentiment of what he had said to the journalist. By printing the mis-quote the journalist had basically made Kelly look like he was snitching on his pro-surfing peers – never a good situation to be put in. Kelly reportedly, later sent an email to all the surfers clarifying what he had in fact said.As pro surfing strives to achieve greater commercial viability and credibility under the management of new owners Zosea media, the drugs in surfing issue will likely rear its head again. Truth be told, most of us couldn’t care less if surfers, pro or otherwise, occasionally indulged in recreational drugs. However, the pro surfing fraternity is under the spotlight and they are the ones being tested. Like it or not, delivering clean samples is not only important for the commercial viability of their sport but also for changing the outdated stereotype that all surfers are a bunch of drug-addicted drop outs.