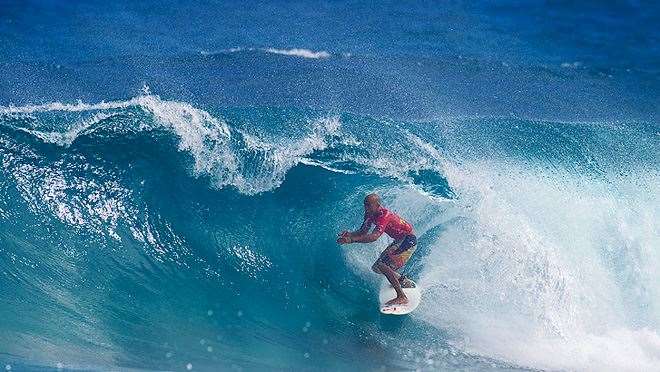 MIDDLES, Puerto Rico (Saturday, October 30, 2010) – The Rip Curl Pro Search Puerto Rico enjoyed a massive opening day of competition today, completing Round 1 of the men’s event as well as Rounds 1 and 2 of the women’s in punchy three-to-four foot (1.5 metre) righthanders at the primary site of Middles.

Event No. 9 of 10 on the 2010 ASP World Tour, the Rip Curl Pro Search Puerto Rico has hyper-focused the attention of the international sporting world, with a history-in-the-making ASP World Title Race.

Kelly Slater (USA), 38, former nine-time ASP World Champion and current ASP World No. 1, could potentially clinch an unprecedented 10th ASP World Title in Puerto Rico, and moved one step closer to that goal today with an emphatic Round 1 victory.

“I actually felt a little jittery out there at the start,” Slater said. “I kind of found my feet towards the end and I feel a lot better now that I’m straight into Round 3. I have a really good support crew here. My girlfriend Kalani, my manager Terry and publicist Shelby are flying in. I flew Mark Cunningham over from Hawaii because he’s never seen me at a contest and I told him he had to come. I’ve seen a bunch of old friends from here and Florida and I have friends coming in from Barbados. I’m really thankful for all the support.”

Slater took out the round’s top honors for a combined heat total of a 16.27 out of a possible 20, with some impressive tube-riding and high-risk surfing.

“The board’s glassed pretty light but it feels good,” Slater said. “I’ve had it at about four events this year so it’s been working well for me. My first wave out there, I just kind of rode it to the end to see where the sections were breaking. After that, I felt like I had it pretty well sussed.” 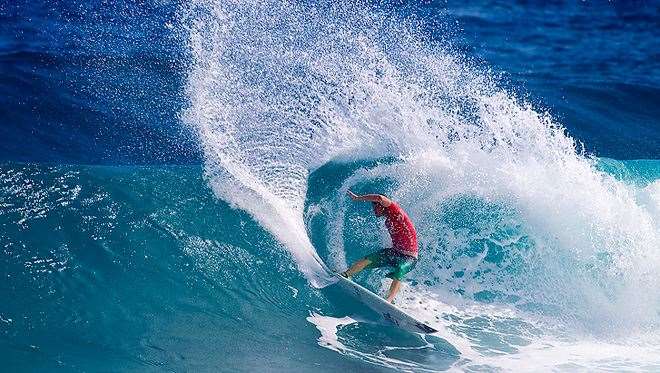 South African Jordy Smith is taking it all in his stride, fully aware his task of overcoming Slater for the title is a mammoth one.

Smith’s win this morning propels the 2010 ASP World Title race into the coming days, although the big South African is humble to admit the monumental task ahead.

“You get big local support everywhere you go,” Smith said. “Whether it’s J-Bay or Huntington Beach or Puerto Rico, I think it’s great that you get that everywhere you go and it’s awesome to be on both sides of it.”

“At this point for me, it’s all about surfing for me,” Smith said. “He has to lose pretty bad for anything to change at this point so I’m just enjoying things at the moment. It’s an honor to be in the race still and I’m really enjoying Puerto Rico.”

“Luckily, the wave is so fast and perfect so I don’t have to think much. My back heel is pretty painful right now, but hopefully the urchins bring me luck. The wave is really fun. It’s a really high-performance wave with good barrels. The last two contests have been bad for me. I’m very happy to get through my heat and I’ll be able to get some rest now and better familiarize myself with the area.”

“I had a couple weeks to prepare for this event since the last one,” De Souza said. “I have been training really hard and working on my heat strategy. So to come out today and apply it and move through feels really good.”

A perennial threat at the majority of stops on the ASP World Tour, De Souza has suffered early exits in the last three events and will look to remedy the situation in the remaining two events.

“My goal for the rest of the year is just to regain my confidence and to surf every heat well,” De Souza said. “I’ve had a difficult middle of the year so I just want to put a strong performance in for every heat. I have a really good board at the moment and I hope I can keep going.”

Mick Fanning (AUS), 29, reigning ASP World Champion and current ASP World No. 3, saw a return to form today after an uncharacteristic early exit in the previous event in Portugal, posting a convincing opening round victory over Americans Gabe Kling (USA), 30, and Patrick Gudauskas (USA), 24. A past two-time winner of the Rip Curl Pro Search (Reunion Island in 2005 and Portugal in 2009), Fanning secured the win on borrowed equipment after his surfboards failed to arrive in time.

“This is actually a board that I sold to Shaun Ward a while back,” Fanning said. “He had it here and was kind enough to offer it to me to use so thanks for him. I was going to use one of Steph Gilmore’s backup boards, but I’m lucky Shaun had this one as it has a bit more foam. The waves out there are really fun. They’re a lot punchier than they look from the beach and offer some really good sections.”

When men’s competition resumes, up first will be Taj Burrow (AUS), 32, up against Dillon Perillo (USA), 20, in the opening heat of Round 2.

Following the completion of the men’s competition, the Rip Curl Women’s Pro Search Rip Curl hit the water for Rounds 1 and 2 as the ASP Top 17 tore apart the chunky Caribbean conditions.

Claire Bevilacqua (AUS), 28, current ASP Women’s World No. 11, completely demolished this afternoon’s chunky conditions, posting the highest heat total of the event, a 15.67 out of a possible 10, to advance directly to Round 3.

“I just want to surf and have fun,” Bevilacqua said. “I love taking down the top girls like Sally (Fitzgibbons). I just want to be a role model.”

Sally Fitzgibbons (AUS), 19, current ASP World No. 2, advanced in second behind Bevilacqua in the highest-scoring heat of the afternoon keeping the ASP Women’s World Title Race very much alive.

“I kept falling off on all my finishing turns,” Gilmore said. “I think it was a mixture of nerves and a few wobbles out there. I’ll probably draw Pauline (Ado) again in Round 3 and she was ripping so it will be interesting. I love it here in Puerto Rico. I have a good support crew here, it’s beautiful and I’m looking forward to the rest of the event.”

When women’s competition resumes up first will be Sofia Mulanovich (PER), 27, up against Lee Ann Curren (FRA), 21, in the opening heat of Round 3.

Event organizers will reconvene tomorrow morning at 6:30am to assess conditions for a possible 7am start.

Surfline, official forecaster for the Rip Curl Pro Puerto Rico, are calling for the surf to come down a notch or two into Sunday but fun size surf is expected to continue as well. NW/NNW becoming N swell mixes in with the lingering trade swell Monday into Tuesday of next week. Smaller, short period trade windswell is expected for Wednesday.

Highlights from the Rip Curl Pro Search Puerto Rico will be available via http://live.ripcurl.com

The Rip Curl Pro Search Puerto Rico is fully supported by the island of Puerto Rico.