The king is back after winning the Volcom Pipe Pro.

The Volcom Pipe Pro final just wrapped and it blew my tiny brain. The QS3000 that punches above its weight ended with Kelly on the podium in first place for the first time in two years. If you weren’t watching the final, I feel for you. It was 8-12 foot Pipe and dizzyingly flawless as Kelly, Jamie O, Bruce Irons and Makai McNamara put on a show.

Let me first talk about the Volcom/Red Bull partnership. It’s a beautiful thing. The webcast was slick, the production values as good as it gets. Case in point, if there was a wave about to be ridden the sideline reporter would drop the mic and send it straight back to live action. No scheduled ad breaks between sets, no missing stellar waves as they were ridden. The WSL could definitely take note.

But back to the highlights and there were many.

Holy shit who knew Whitz could charge that hard? I didn’t! I snoozed through most of his pro career but the former Bronte local and CT journeyman showed true grit as he wrestled bucking foamballs and threaded under guillotine lips.

Marco who? This was another head scratcher. I’d never heard of Marco before and neither had Sal Masekela but man can he charge. He beat Jack Robinson. That’s like stealing eucalypts from a koala on steroid. The kid from Uruguay who lives in Garopaba, Brazil stampeded his way into the semis and will leave Hawaii with his head held high.

Where were the Aussies?

Given the waves they scored it would have been nice to see more Aussies in the mix swinging for Pipe dreams. Instead it was left to a mix of QS journeyman and rookies to fly the Australian flag. Since when did surfing perfect Pipe with four guys fall off our radar?

Nothing but beautiful music to my ears. How could you not enjoy the silky smooth tones of Sal juxtaposed by the feverishly ecstatic Dave Wassel? The superlatives were flying as the pair talked the house down and cast a very long shadow over the current crop of WSL talking heads. “It’s like the ocean put a whole bunch of coins into the meter and it’s on,” said Masekela on conditions.

Mr Bruce Irons, the last true rock star of the noughties, back surfing the house down at Pipeline. Scraping through heats on the buzzer with drainers at Backdoor and dropping in with trademark slo-mo steeze at Pipe. What was his strategy this event? “My strategy … I don’t really have a strategy. I hope to get on a roll with Mother Nature and hope we connect.” Although out-surfed in the final his return to form has been the story of the winter this season.

Makai McNamara is a lunatic.

Watching Makai McNamara fall head first on a 12-footer at Pipe was both sickening and awesome. His father, Liam, cut his teeth at Pipe and Rocky Point with a combination of fluro, brawn and bravado. The apple has certaintly not fallen far from the tree. When he drew an interference against Dusty Payne I was waiting for fists to fly. Instead he composed himself and trucked into the most loony wave of the event. As he extied behind the spit he threw the bird to the judges eyeballing them with a steely glare having just manufactured a perfect 10 and a win. Talk about redemption!

Kelly Slater is back.

“It’s the first contest I’ve won in two years so it feels good,” said Kelly as he was chaired to the podium beaming like a glowworm. This was the most commanding he’s been in years and makes you wonder what would happen if each event were held in flawless waves. “That is what you grow up dreaming of at Pipeline,” he added in awe of the perfection unloading behind camera on second reef. If he can ride the momentum of this win into Snapper – and the waves pump – we could be in for a helluva year. With his business ventures blossoming and more brain space available for competition focus again you have to say, it’s now or never for the king. 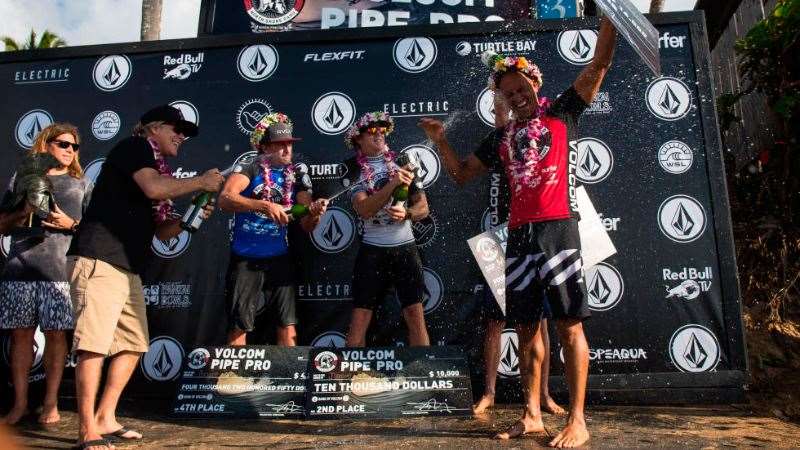 It's good to be the King. Kelly recapturing that winning feeling at the 2016 Volcom Pipe Pro. Photo: WSL/Heff