Round three and four from the Quiksilver Pro through the eyes of Tracks' Ed. 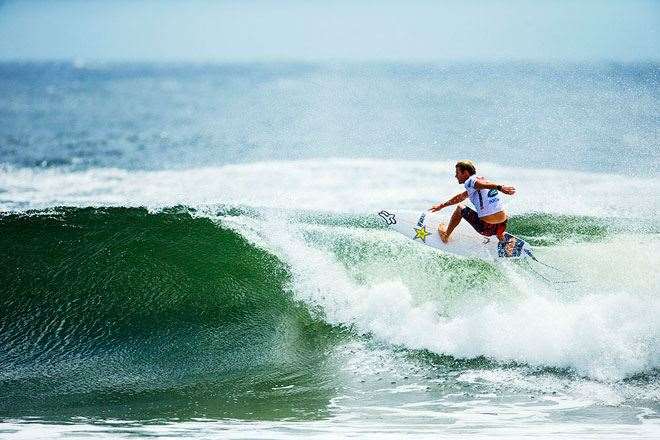 Anyone who questioned Slater’s continuing passion for competition only had to witness his paddle battle with Bede Durbidge in their round four match up. It was like watching two rowers race neck and neck for the line. Bede’s training regime is well documented but not much is ever really said about what Kelly does out of the water. Still, it was Slater who one the splash and dash against the much younger Durbidge and Slater who secured the come back victory in the heat. Although he was pipped in the no loser round four heat, it’s great to see Bede back in the hunt after an indifferent 2012 season. The lanky Queenslander with the lethal layback slash is the everyman’s hero and will never lose a heat without a flight. 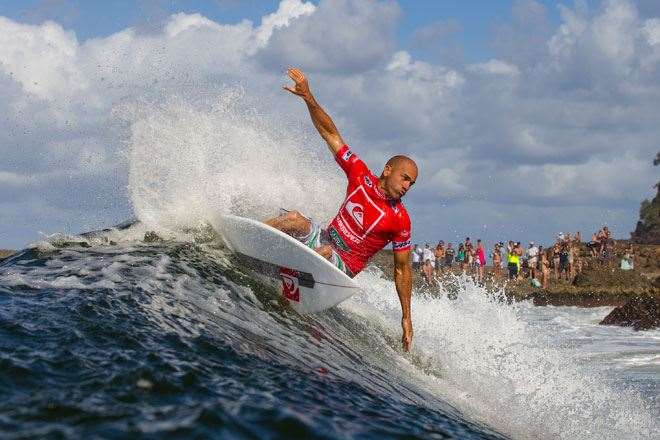 Laddette in red, Kelly Slater in the moment. Pic: ASP/Robertson

Meanwhile Slater isn’t sure whether he is taking part in a surf contest or a NASA experiment where surfboards instead of rockets are tested. He changes equipment more often than girls change outfits – maybe it’s just his way of keeping things interesting. Against Dusty in round three he looked silky – one air reverse in particular was like watching a kid on a merry-go-round, you never doubted he was coming out of the turn riding high. Slater’s other main asset is his old trick of being able to surf from behind the pocket. Invariably this means he is always turning in a super critical or steep section of the wave. This is particularly crucial at present because the bank at Snapper isn’t that well groomed. Instead of behind-the- rock grinders we’re seeing chubby sections and flat corners. Somehow, despite the incongruous faces, Slater always finds a way to jam a turn in the most critical sections. The fact he has done most of his damage with stock turns – like his patented forehand slash and cutbacks – further indicates that it’s his placement of turns that is getting him the points. However, his completion rate on the more contemporary moves hasn’t been great and if he looks beatable anywhere it’s in the air. 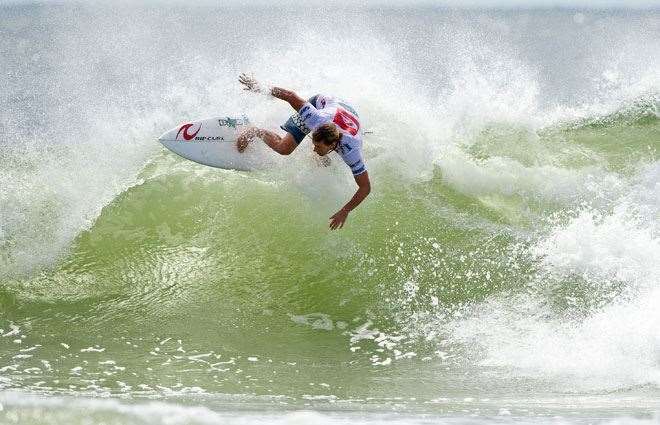 Mr backahand at this year's Quik Pro has been shared by Copacabana's Matt Wilkinson... Pic: ASP/Hayden_Smith

Matt Wilkinson may be flanked by an entourage of drinking partners instead of a squad of coaches but his rock star approach to pro surfing continues to work for him in this event. On a more technical level Wilko does well because when Snapper’s walls are less vertiginous and more sloped it can be an advantage to be on your backhand. If the waves are fat, an in form back-sider can generate more whip and add more subtle variation to each turn in situations where natural footers can struggle to change the angle of a turn or get vertical.

Travis Logie is another example of a goofy who has been able to capitalise on the slightly junky sections. The gazelle Logie took down the African lion, Jordy Smith, with his typically frenetic backhand approach. Logie has learnt to add more variation to his attack and is linking his Berocca-injected turns better than ever. “ Either way a South African goes through,” commented Jordy as the two South Africans waited nervously for the scores to come in. Jordy was doing his best to appear diplomatic; he would have won a Logie for the performance but in private he will be very disappointed at losing to a surfer he likely sees himself as being superior to. It was a humbling moment for Jordy and one can only hope it fuels his desire to improve his performance. Simply being Jordy Smith is not going to be sufficient to get him through heats. 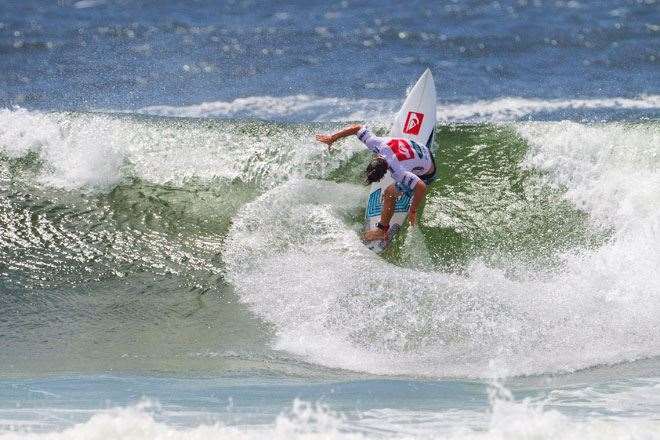 ...and the white hot Travis Logie (who took down good mate Jordy Smith in round 3). Pic: ASP/Kirstin

Mick Fanning’s biggest asset remains his speed through turns. Mick is in and out of a fully committed manoeuvre faster than any surfer on tour at present [save maybe Felipe Toledo]. Taj subscribes to a similar philosophy but sometimes hits the eject button from the turn prematurely. These check turns look whippy and impressive but one wonders if they score as well as Fanning’s fully committed speed carves.

In free surfs and heats Julian Wilson looks to be in a good space. His victory in round four over Joel Parkinson also made it apparent he won’t be intimidated by more favoured competition. Julian combined contemporary moves with exquisitely timed power-turns and at present “Jules”, “Joycey”, “J-dub” is finding the synergy between new-school and old school better than most of his peers.

Meanwhile, young Mitch Parko was paddling around at Kirra yesterday afternoon and felt his cousin Joel had been ripped off in the heat against Julian. No one could ever accuse Mitch of bias of course. There were definitely a few barrels for the late on mid-tide but Adam Melling was the only remaining competitor in the contest to drift down to the big groyne. Perhaps most surfers were convinced all the action would be back at Snapper the following day. In Mitch Parkinson’s opinion it wasn’t contestable but then he was sure Joel had won. Needless to say, if Kirra does come into play then all the rules applied to Snapper get thrown out and it becomes a pure tube duel. Wouldn’t that be just dandy!