What Kelly looks for in a board collaborator.

Kelly Slater unveiled the new logo for his Slater Designs line of boards in his round one heat at Pipeline yesterday. Nonchalantly arriving with two shooters that featured the new insignia, Kelly didn’t make any fuss about the revelation until Tracks quizzed him about it after his heat.

Since acquiring the Firewire brand earlier in the year, Kelly has continued to experiment with a range of different craft. Dan Thompson and Greg Webber are the two shapers who have been most consistently aligned with Kelly throughout 2015. One of the boards in his Pipe arsenal today was obviously a Greg Webber design. It featured the iconic Webber ‘W’ symbol in addition to Kelly's new logo and also had a mark on the tail which read “6’3” Banana” – the model Webber made famous in the early 90s.

In the post heat press conference Kelly also suggested that at this stage he is planning to compete next year. “I still feel that if my body and my boards are right I can challenge for a world title,” he confidently told the press scrum. When quizzed about his world title preferences Kelly suggested both his heart and his money were on Mick winning the title this year.

“The odds are with Mick. He’s a bit craftier than Adriano is out here. I think Medina obviously has a chance but you know Mick only needs to win one or two more heats and he’s got it. My money’s on Mick … I’d like Mick to win, literally at the first contest this year I told him that I thought he was going to win the title this year. I just felt something. The first year Mick won his first title I also felt something also. I don’t want to jinx him in any way but I told him earlier in the year I thought he’d win and then he had the whole shark thing happen and he’s been going through some personal issues, so I think it would be a nice win for him … You know for a week he was about the most famous surfer in the world and it would be nice for him to cap this year off with wining the world title.”

Below, Kelly talks about how Slater Designs will work in conjunction with Firewire, his faith in the revamped banana board and what he looks for in a collaborator.

Is this the unofficial launch of the new logo on your boards ? Is that the first time you’ve pulled it out?

Kelly: Yeah it is, I guess so.

Did you come up with the logo?

Yeah, I made the logo myself.

Do you have a name for the line of boards?

How will that line differ from your Firewire range?

My boards will also be available in Firewire technology.

Obviously you brought a Greg Webber board with you to the beach today but who else might we see make boards under the Slater Designs tag? 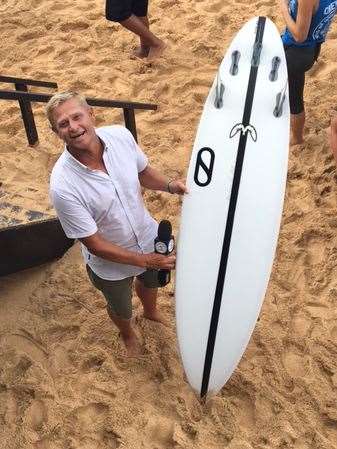 Strider fondles one of Kelly's boards with the new 'Slater Designs' logo (left) at the Pipe Masters.

What’s a shaper got to do to impress you enough to get a board under Kelly Slater’s feet and possibly become part of the Slater Designs camp.

(Chuckles) Ahh, I don’t know. I just work with the people that I have a history with or someone that’s done something that’s sort of different and appeals to where I want to go on a wave.

The Webber boards – some people totally get Greg and some people don’t get him. He’s kind of one of those guys who’s a polarising figure in a way because he’s always been really extreme and he’s not afraid to think out of the box. Greg and I; often we won’t see eye to eye, but I really appreciate where he goes with design. I sort of feel that with the banana boards … I think maybe it was ’93 that Rommelse won the Triple Crown on those things. Richie Lovett told me that they were the best boards that he ever rode in Hawaii. I’ve ridden them in some waves that I couldn’t imagine a board being better. Unfortunately they faded away real quick after about ‘93 ’94. So we’ve kind of returned to that rocker and bottom curve and modified it a little bit. There’s different foils these days and they’re more easily repeatable. And then Tomo and I, we’ve been surfing and shaping together all year. There’s no secret or anything, I’m not against working with anybody. It’s just whoever I end up hanging out with or designing with … You know I’ve worked with Simon (Anderson) and Maurice (Cole) and obviously Al (Merrick) forever.

It also looks like you’ve taken some of your pit crew from Channel Islands over to Firewire and Slater Designs. For example Travis Lee was pretty instrumental overt at CI and he’s now working with you.

Yeah Trav’s been working with us almost all year now. Trav probably knows what I like maybe more than I do. You know he’s ordered every board I’ve had pretty much for the last ten years …

It was really tough to leave CI. Personally it was really hard and a lot of that difficulty was associated with not having Travis there. Besides the personal feelings, just on the business side of things. But Trav and I are best buddies and he’s so easy to work with; I don’t even have to explain much to him you know. It’s nice to have someone around you that you don’t have to explain everything to.

Pretty much, yeah. Don’t tell Belly that though …