The Corona Bali Protected is approaching, and here are our surfers of interest at this often-incredible event.

It was good to see Luke Egan on the beach at Bells. He added something new and fresh to the team, and it seems is trying his hardest to lose the ‘grumpy Luke’ moniker. Good for him. No need for grumpiness. Especially now that the tour heads to Keramas, where Luke is a partner in the Kommune Resort. It’s a grand old place, and it seems that someone keeps on shipping in bikini girls to lie around the pool. The girls are always there.

Last year’s champ Italo Ferreira should be pumped up and ready to do damage again. Although it was him who almost got damaged last week when he was bounced over The Winki Button.

He is quite a ball of emotion at times, from dancing a jig around the podium last year after his win at Keramas, to going flakey on us on the Bells stairs, to croaking his way through a distressed interview with the WSL thereafter. He does put it out there. What has come to the fore over the last couple of months however is that Italo loves to win. He is the guy who thrives on victory and applause, much like Kelly, and he has already unlocked the code to success at most of the destinations on tour.

Here he is warming up at Uluwatu:

A few years ago there was a contest at Keramas, the Oakley Bali Pro. It was a boisterous affair; expensive beers were flowing, bikini girls were everywhere and Oakley provided a very good event for all. Some of the highlights were Trevor Robinson wanting to fight me at breakfast, hanging out with Sal Masakela along with some famous actress who’s name has eluded me ever since I met her, and watching the most ridiculous surf ever at Keramas. Has the wave deteriorated since? Hell yeah, I’ve never seen it as good ever again. Maybe the resort has prevented some sand flow or something, but late one afternoon John John Florence pulled off probably the most ridiculous move seen in a CT contest up to that point, and for that he remains as the guy who could win this event at will. The clip has 1.4 million views so far, so let’s add to those totals.

The thing with Jordy Smith right now is that he seems a little bit irritated with how things are working out at the moment. He just has so many close calls not going his way. However, when he really wants to prove something is probably when he’s at his most dangerous. Remember when he was forced to go and resurf a heat with Conner Coffin even though he had done nothing wrong at JBay? He was bummed, and to prove a point he went out and banked a ten-point-ride off the hooter and then pulled that glare back at the beach. Enough was said in that look. If he is a little annoyed at the mechanisms of life right now, we might just see him drop some seriously big scores, just to make his win as definite and as clear-cut as possible, with no fucking around. Sitting at number three on the Jeep Leaderboard, Jordy could use this event to ramp into a full-blown title race. 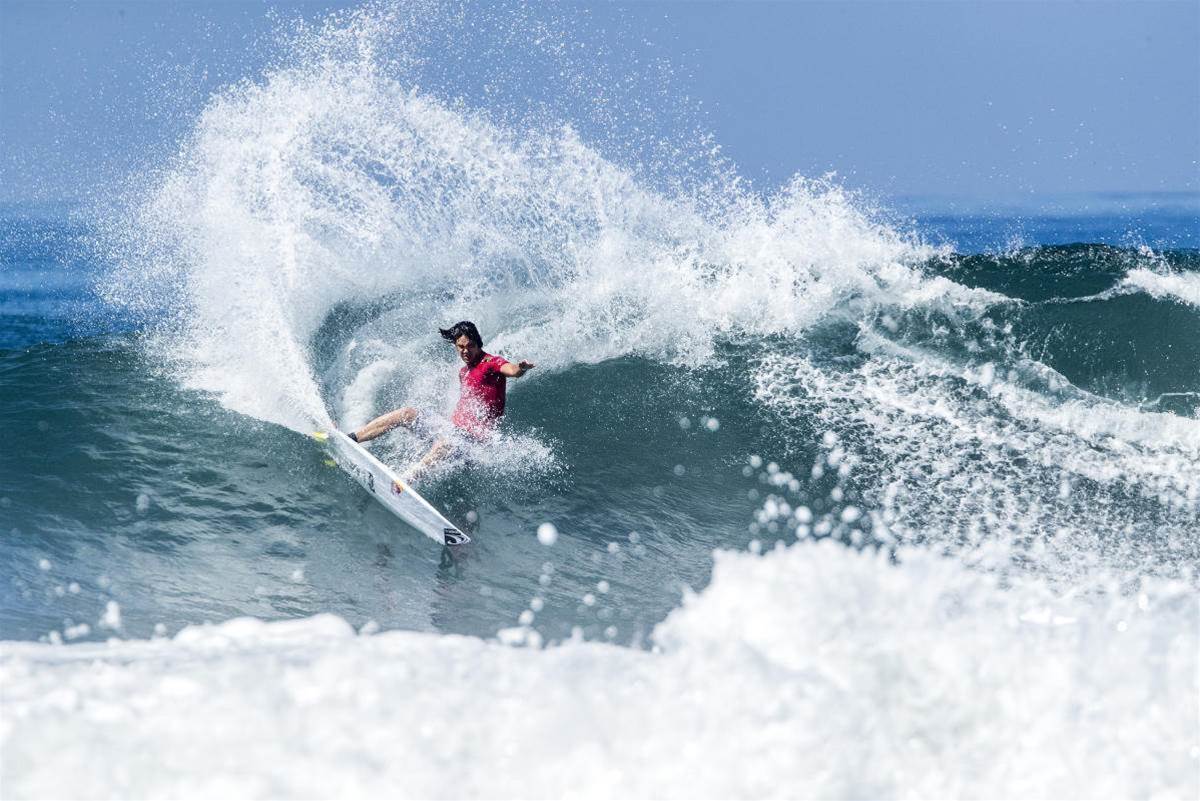 It seems Kolohe Andino is in a similar sort of place. He has decided that he wants to do this, to get serious and become a world title contender, but that there is some sort of conspiracy of nature against him. When he needs the scores he can’t buy them. It is great to see his maturity finally arriving, with that could come the eye of the tiger, because if Brother unlocks the winning code there will be very little stopping him.

Currently on a little surge of confidence and steely-eyed determination, Kelly Slater is back in the game and wants more applause and adulation. There’s no denying that he deserves all of it and more, and the wave suits his surfing perfectly. It is quick and punchy, offers open faces for big turns and barrels, and Slater could easily find his groove and bank another win. For the first time ever, surf fans are starting to talk about his age and that it is starting to come through in his surfing, but he’s far from done and Keramas might be the exclamation mark that he needs to let the world know he’s not a spent force.

Without wishing to detract from Julian Wilson and his strong recent performances, Ryan Callinan has a good vibe going, and there are people who really enjoy his surfing and his chilled nature. He just might be what Australia is looking for as a ‘next best thing,’ and he will fill those shoes admirably. Always smiling, quietly confident, raw and somewhat unconventional in the water, there’s enough in the package to always surprise, and the judges like that.

The Filipe and Medina show will also be a huge part of this year’s contest, so let’s not leave them out of any conversation as well. So now they're in the conversation.

Here’s a look back at last year’s event.