Number one contender switches out Mayhems for a DHD

Kolohoe Andino seemed to be dripping with equal parts guilt and glory after his round 32 win over Adriano De Souza. Kolohe explained that before the heat he’d called up career-long shaper, Matt 'Mayhem' Biolis, to let him know he’d be riding a Darren Handley shaped DHD in his heat.

It was almost the equivalent of ringing up a girlfriend and asking her if you could break up for a while because you met a hot chick on holidays. It was evident from the post-heat interview with Rosy Hodge that Kolohe found it difficult to make the call to Mayhem’s Matt Biolis, who has been shaping boards for Kolohe since he was a Trestles, teenage prodigy. Both Biolis and Andino are San Clemente stalwarts and Kolohe has long been synonymous with Mayhems, and the inspiration for many of the models.

Back to the Basics from Kolohe Andino on Vimeo.

There’s little doubt that Kolohe, the de-facto leader on the Jeep leaderboard, has reinvented his act in 2019 and is willing to make hard choices that may not necessarily please everybody. His decision to ride a DHD came after he reached out to Mick Fanning for advice on how to approach J-Bay. When Mick suggested a couple of DHD’s might make a difference, Kolohe acted on the tip.

As the commentary team pointed out, there was no little irony in the fact that Mick had switched from DHD’s to Biolis Mayhems to get the most out of his own surfing when competing at Trestles back in 2011.

Given Darren Handley’s Gold Coast influences and experience in shaping four, J-bay winning boards for Mick Fanning and one for Steph Gilmore, Kolohe had good reason to ride a DHD in this year’s Corona Open J-bay. The board certainly looked solid under his feet in his victory over former world champion Adriano De Souza. The rails knifed on the open-face and the finishing turns stuck for Kolohe, in a heat where he was solid without being exceptional.

Should Matt Biolis be worried that his front-running team rider is plotting a divorce? Unlikely. Kolohe has had his best year to date on the Biolis Mayhems and Matt is almost like another member of the Andino family. When Mick Fanning had his dalliance with Mayhems he learned from the experience and then beefed up the boards he was ordering from Darren Handley. If Kolohe does go on to win the world title Matt Biolis will likely be the one sharing the champagne.

What’s the moral of the story? Surfing is not quite as rigid as Formula One Racing where a driver is paid a large sum of money by the major sponsor to get behind the wheel of their vehicle exclusively. If you drive for team Ferrari you are certainly not doing a cameo in a BMW. While we don’t know the details of the official relationship between Biolis and Kolohe, shapers usually flow surfers boards as a marketing mechanism. If the surfer performs well it looks good for the shaper and it follows that they will sell more boards. However, the search for the magic board is part of every surfer’s DNA. Throw the pressure of competition and the possibility of a world title into the mix and you have some powerful factors making you consider sleeping around. 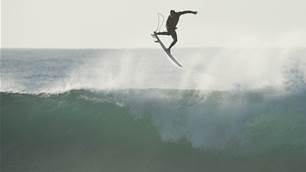