Heavy Water, the Nathan Fletcher biopic directed by Mike Oblowitz, is set to tour Australia over the next month. The film aims to delve deep into the roots and mindset of board sports culture as seen through the actions of big-wave surfer, skater and motocross athlete Nathan Fletcher. Its climax features Fletcher acid dropping out of a helicopter on to an Outer Reef wave on the North Shore, a never before performed stunt.

Oblowitz had made feature films with Val Kilmer and Steven Seagal, music videos with Bowie and Clapton, and the acclaimed, controversial, but unreleased, surfing and drugs documentary Sea of Darkness. Ahead of the Australian tour, and series of Q and A’s at the screenings, as part of my Mpora Podcast. I caught up with the Director to talk through a film that taken a while to come to fruition.

This film has been in the pipeline for years. Why has it taken so long to come to the big screen?

Originally we filmed Nathan and Bruce Iron surfing Mavericks not long after both Andy and Sion Milosky died. We then filmed them two surfing that epic Cloudbreak session of 2012 on that big red board, then towing gigantic Teahupoo for the Code Red swell. So the movie was really a tribute to fallen brothers, to Andy and Sion, and that’s how the film kinda ended. But when we first showed it 2017 it created a massive amount of controversy in Hawaii because no one on the North Shore wanted to hear about it Sion’s death.

You are no stranger to controversy in regard to surf films.

Well, that was the issue. Because of Sea of Darkness everyone thought it was just going to be about drugs and that I was going to go down that path with Andy and Sion, However really that was the furthest thing from my mind. That first version of the film got submitted at the San Sebastian Film Festival, the real film one, not the surf film festival, and received an incredible reaction, reviews and accolades. After that Red Bull came on board and said they would back it, and so we could tweak the film and add the acid drop, which had been Nathan’s dream from the very start. We just then had to work out how to do it.

Did Red Bull stipulate that the film had to have some crazy stunt?

No, not all, that was driven by Nathan. As a kid Nathan he had watched his brother Christian and Jay Adams do acid drops from the roof of their house onto a homemade ramp, so he’d grown up watching that shit. He’d also watched  Ace Cool get dropped off in a helicopter in the outer reefs in the ’80s, so that was an inspiration. Also he’d done some cliff jumps with a board around Mavericks, which is all in the movie, so he’d been building up to this forever, but no one believed he could do it .

I take it that wasn’t easy?

Well, no one had done it successfully before. So we had people blowing up on the North Shore when they heard of the plan. I had Eddie Rothman ringing and saying I was going to crash the chopper in his backyard. And a lot of the big time water safety guys in Hawaii said it couldn’t be done. However Rusty and Brian Keahula said they only guy that could possibly do it would be Nathan, but it still took years to get a safety crew together as the water safety guys wouldn't work with us and that led to not getting a permit. It was a pig fuck in a barnyard. It was not easy to get done. With that and the controversy with Sion, all hell was breaking loose, it was supposed to be easy, get in, get out and move on, but it became another crazy turn on the North Shore wheel, which I guess is just how it is.

Eventually how’d you pull it off?

By the time we did it, it was the end of the season and everything that could go wrong did go wrong. There was wind, rain, lightening; it was some insane. At one stage Nathan hit his head on the chopper and we thought he was dead, it was freaky shit. Red Bull only stipulation was that we had to shoot it from start to finish. There could be no special effects to make it 100 per clear this was real and absolutely no bullshit. We did that and it took a lot to get it and it was fucking dangerous, but this shit was for real and he pulled it off. 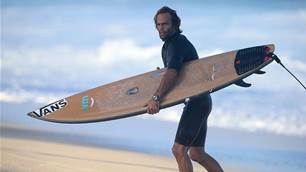 Nathan Fletcher Acid Drops From A Chopper Into The Byron Bay film Festival.