A big day in the West!

Today we transitioned from the tropics of Bali to the wilds of Western Australia.

As the webcast fired up it was a pleasure to see Barton Lynch had joined the commentary team for the event. But before competition began he delivered a sobering reality for Australian surf fans, stating that as we commence the fourth event of the year we are without an Australian in the top 10. It’s one for AL Hunt to research, but Pottz may have been right when he said he can’t remember it ever happening before.

The other sobering thing about this part of the world, especially if you’re a Brazilian goofy foot, is sharks. So what measures have been put in place to get them back in the lineup after the call was made to abandaon competition last year after two non-fatal shark attacks occurred on the same day?

A full time drone scanning the lineup and a fisheries vessel which will scan for tagged sharks from the channel.

This seemed enough to placate Gabriel Medina who said, “Last year was a tough one, everywhere we were surfing, we were seeing sharks," he said. "This year, they've put in place more security — jet skis, drones and planes. "I feel much more confident.”

The women took to the water first for their seeding round. At first they seemed to struggle to come to terms with the gnarled and windy lineup after being spoiled with two-weeks of Indo glass.

Caroline Marks shook off her disappointing and illness effected performance in Bali and surfed strong.

Carissa Moore’s superior power dusted Nikki Van Dijk and Keeley Andrew after a slow start, which included getting rinsed on a takeoff and washed around to the left-hander.

Steph Gilmore took to the lineup resplendent in yellow, the board she was now dubbed the ‘cash cow’ under her arm. However it was Coco Ho who was on the money, beating the current ratings leader and advancing to round three.

Courtney Conlogue took an easy win over Breesa Hennesy and Macy Callagan, who unfortunately is looking out of her league so far in her rookie year.

Tatiana bested Sally Fitz with a wild float on the end section on which I had her written off, but she appeared from the whitewater to steal the win.

In the last heat Lakey Peterson started and finished with authority. Beating an in-form Malia Manuel, and local Bronte Macaulay who didn’t even ride a wave.

The first heat of the mens was perhaps the most intriguing of the round. Kelly had found some sort of form in Keramas, while John was looking for retribution for an early exit in Bali. And Jaddy, well he’s just Jaddy, always a threat.

On his first wave it quickly became apparent Slater’s board was small. Whether it was an Aipa shape or not we’re not sure. Under his feet it looked twitchy and ridiculously responsive. Perhaps not the kind of equipment most would utilise to tame the warbled faces on offer at Main Break, but as we all know, Slater ain’t most. To me it looked a bit start stop. On the bottom turn sudden bursts of speed seemed to catch Kelly a little off guard, inadvertently over committing him to each turn.

One one turn Kelly took it into the lip well beyond vert, which while super technical and difficult to do, at real speed can make a turn feel a little late and mistimed. In the end, without the tubes of Keramas on offer, he would only finish with twin 5.17s in his account.

John John on the other hand was smooth, considered and powerful. His Pyzel - the same model he used to transform the way this wave could be surfed -  fit right back into the groove he left here in 2017. He banked a 6.17 and 6.67 within the first ten minutes.

In desperation, Kelly threw hail Mary attempts, but failed to stick anything. Strider suggested Kelly needed to leave the tricks to the kids and rediscover his rail.

Jadson surfed his way into second place and Kelly will now find himself battling for survival in round two, and he paddled in with angry splash and an intentional interference on Jadson Andre.

It was Soli Bailey who struck quick and early, locking in a 6.23 and a 5.57. His approach aggressive and powerful, with exaggerated shoulder rotation that aimed to get the most out of each turn, perhaps John’s heats from 2017 were getting a workout prior to the event.

But it was not long until Jake Paterson’s ninja protege struck like an assassin, banking a 5.23 before dicing a wave with a restrained but blade like precision for a 7.50.

It’s now or never for Julian Wilson. Not for an attempt at a world title in 2019, that ship has sailed, but to salvage a respectable finish come the end of the year and keep himself on tour. Who would’ve thought this would be the Sunshine Coaster’s reality after his gutsy runner-up finish in 2018, but here we are.

He held a slender lead after the first ten minutes, but one that would easily be eclipsed by the tenacious Peterson Crisanto, who surfed like a young Adriano De Souza, each wave ridden with a strong work ethic.

With under 10 to go Julian dropped to third place, the smell of another appearance in the second round and possible dirty-turd hanging in the air.

With under three minutes to go he stroked into a good looking wave, started with a drawn out carve, before banging off a jab at the foam and then jamming a tight arc in the pocket. Julian’s desperation was apparent when he dry docked himself for a final whitewater tap.

The judges deemed it worthy and Julian was off the hook. Could this be the turning point in his season? We hope so.

Italo Ferreira looked ginger in Bali after tweaking his ankle on an air attempt during a freesurf.

Would the spark flow back in the electric goofy footer in West Oz? He looked spritely on his first wave, his general pace a notch above those in previous heats. It was only a four but he looked alright.

Speaking of sparky goofy footers, Joan Duru is on a heater at the moment. The frenchman did some fine surfing in Bali, and the backside power the judges loved up there was once again on display at Margaret river. After his first wave it was clear the judges were still enamoured, awarding him a 7.67 moving the most water of anyone thus far.

Any doubts about Italo’s ankle, or at least his commitment to win despite it, were cast aside when chasing a 6.02 for first place, he took off on a small wave and went to the air for a full rotation, which he stomped in the flats, the judges giving him the nod with a 6.90.

He followed that up with a 7.13 for the win, and just like that he was back.

Another goofy looking to reclaim some form is Gabriel Medina. In true Gabby style he baited local wildcard Jacob Wilcox into a ten minute hassle for the first wave of their heat.

However it was Deivid Silva, who stayed away from the hassle, that locked in the best score of the first exchanges - a 6.17 - mainly for one powerful backside blast that had Barton squealing in the booth.

The ocean then began to nod off. And while Gabby and Jacob waited for something substantial, Deivid Picked off a tidy backup for a solid lead.

But out the back an overdue set rolled in, and as the camera panned back out the back, Medina could be seen winding up vertically and monstering the first section of his wave. He continued the whole way down the line, precisely murdering each section on his beefed up craft. The judges rewarding it with an 8.33 and a healthy lead. Game over.

Heat 6 looked like a banger on paper, Fil Toledo, Seabass and Jack Robinson, who had been awarded a last minute wildcard into the event. Unfortunately Jack was on the other side of the planet at the time and couldn’t make it back in time for his first heat. Last we heard he was somewhere in New Zealand.

It was a pressure free affair for Fil and Bass, and fter crumbling to Kelly in Bali it was surely a welcome eventuality for Toledo. He looked sharp on his first wave, unleashing a big arc and a fins free finish for a 7.50 The Sharpeye under his feet offering seemingly unlimited speed.

Seabass added some spice with a vintage back foot free layback for an 8.00, but it was never gonna trouble an in form Filipe.

Before his controversial exit from the Corona Bali Protected at the hands of Jesse Mendes, Jordy was laying down the biggest turns of anyone in the field. He picked up exactly where he left off today, monstering sections with casual aplomb on his 6’3” Chris Gallagher shape. Easily dusting Ricardo Christie and Ace Buchan who were mired in mid range scores, unable to match the power of the South African who locked in two scores in the seven range.

When questioned by Rosie about coming back from his loss in Bali, Jordy responded with the classic, “You can’t let the hair in the salad spoil the salad”.

Heat 9 featured a highlight of the day, a rare three man paddle battle between Leo Fioravanti, Conner Coffin and Ryan Callinan during an otherwise dour affair. It was a mess of thrashing limbs and splashing water. Leo singled out Conner and attempted to paddle him to Madagascar. Ryan Callinan, free of the melee, shot straight up the inside to get the approval of the priority judge and ended up winning the heat. Leo into round two.

2019 fortunes were reversed in heat 10, with Hawaiian heavy hitter Zeke Lau slipping into some form in the late afternoon lit main break lineup. In contrast two of the best performers in Bali, Wade Carmichael and Michael Rodrigues couldn’t match their tropical performances, with Wade relegated to round two. 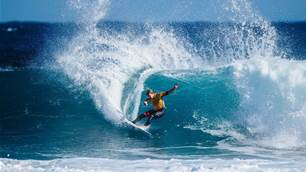 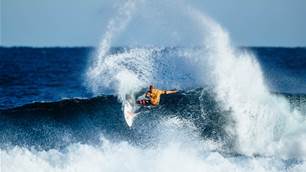