Mark opens up about the psychological challenges and the revelations associated with his injury recovery.

January 2017 Mark sustained one of the worst, non-fatal injuries ever suffered by a professional surfer. While filming on a particularly evil ledge on NSW’s south coast, Mark was thrown over the falls and landed leg first on a barely submerged rock. The impact was so severe that the limb was completely inverted at the knee, snapping all ligaments joined; breaking the leg; causing significant nerve and artery damage. “Humans are not made to withstand this kind of punishment” says Mark.

We caught up with Mark during the week to see how he’s going, and to unravel a few rumours about his imminent return to the big wave section...

G’day mark, firstly, we owe you a congratulations, a hidden wedding, that looked unreal.
Hey Jake.Yeah, well we were planning a huge wedding, but it just got so annoying, we were trying to shift our plans to suit everyone else’s schedule, and we thought, 'fuck it', we already had our trip booked to the Maldives, so we just did it. 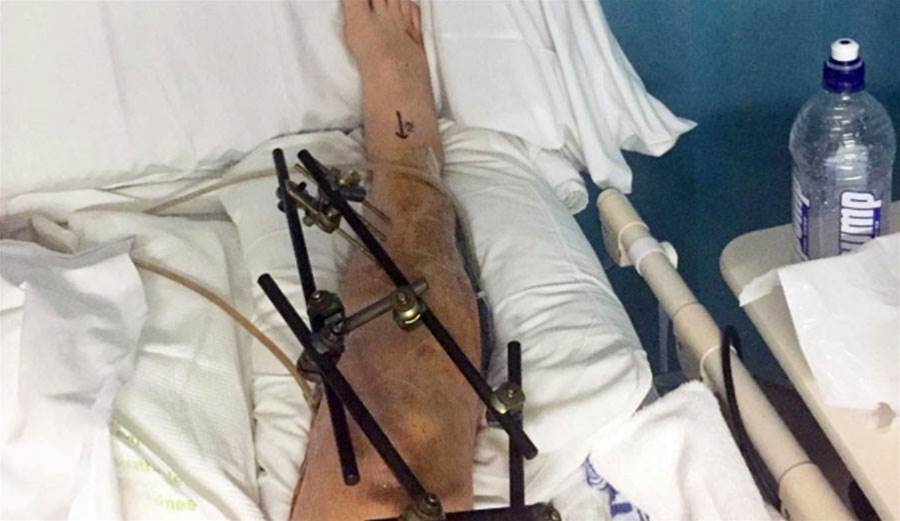 Mark's right leg under reconstruction after his hideous wipeout.

Far out mate, so future goals are kids right? Haha
Oh mate, try to sneak in a few years of solid surf first, but maybe after two years or so, kids would be pretty sweet.

Talking about solid surf, and future goals, I want to know, what scares you mate? I remember the doctor telling you that you will never surf again, now I hear you talking about preparing to surf monsters again? Seriously?
Oh man, it’s not like there is no fear, I’m pretty scared of surfing big waves again.
Just this morning I surfed Snapper and the banks are that shallow I was scared, like I’m scared all the time, but my whole mind is like “you got yourself here, just deal with it now”. It will be tough going back to bigger waves, it feels the same as starting my career again, it  will be fucking tough. Every time you go to a big spot, extra nerves kick in, I’m extra anxious, but then when I’m out there, I realise it’s not as scary as it’s made to be, it’s just in my head. Just like everything in life really, I’m just as scared as the next person, but I’m just motivated to go bigger. Like public speaking, that’s fucking terrifying. 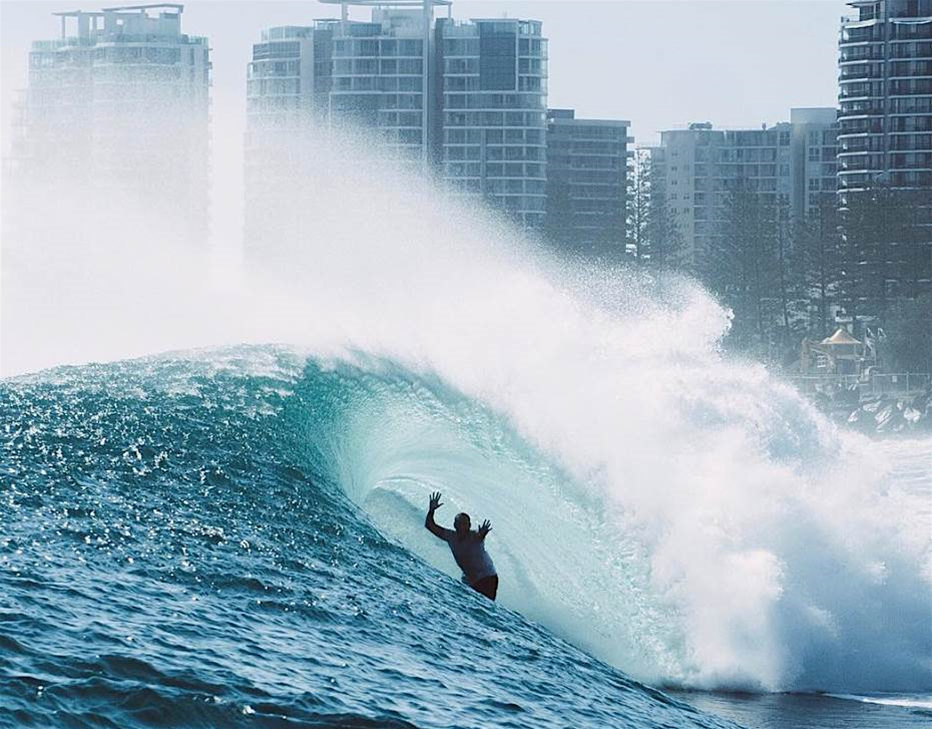 Mark moved to the Gold Coast to accelerate his surfing recovery. Pictured here relishing the opportunity to get barrelled again.

Really? what scares you more, big waves or public speaking?
Fuck, speaking for sure, it’s way harder for me.The stress of surfing for me is what everyone else thinks, every moment is caught on camera, and I feel I’m performing for the social crowd, which is more stressful than what the wipeouts will do. Everyone expects me to catch the biggest waves, and then go bigger and better next time, It’s fucking stressful. Public Speaking is that, on steroids. Because I’m on stage with around 500 people staring directly at me, there’s nowhere to hide. I suppose I’ll get used to it eventfully.

You are one of the most humble dudes I’ve ever met, so where do you hide that fire?
Agh, I always knew I’d surf again, I just didn’t know at what level I’d return to. And it was super scary to hear some of what the doctor said, like naturally when I heard that in hospital, after having the gnarliest pain for a year, I just started feeling sorry for myself, and that’s just the worst. But I let go of all those thoughts when I met this kid who was a quadriplegic who was in hospital when I was, and it just kind of reframed my mind set, and every day I would wake up thinking 'fuck I’m so lucky that didn’t happen to me' you know. After that, every single day I would remind myself of how lucky I am, so then it was less like, I have to get back and be better by this date, it was more like, wake up feeling lucky, I can do the small things that some dudes can’t. That just took the pressure off, kind of let go of dates and when and If I need to come back. As I thought more like this the healing became faster, I grew stronger and stronger, all to a little attitude change. But, I’d always go through patches of questioning if I’ll get back to surfing.

Ah mate, funny you say about the attitude change. I was in service and was injured in 2016,  I couldn’t jump into the surf for a year, as soon as I slowly surfed again, I felt my confidence was down. I was recently out at Shipwrecks (Indo) and a large wave rolled through and I shat myself, just in the back of my mind was a repeat of “My injury, what happens if I get too deep, I can’t get myself out”. Do you feel this injury pressing on your mind when you are out there? And do you ever think of what kind of a surfer you’d be, without these injuries? What opportunities you’ve missed because of them?
Man, I had so many injuries when I  was younger, then I was lucky to have a period of 7 years without a scratch, until I did my shoulder at Jaws, in that one big swell. That’s the only time I’ve ever felt that an injury has made me miss opportunities.That was the one year that I would have got a spot on the Eddie. The shoulder was the toughest on me mentally, as things could have been so different for me. Because the year after the shoulder I could have surfed in the Eddie and surfed the Jaws comp. As far as opportunities go, that was the toughest one. Like this injury is on a whole other level. Like you out at Shipwrecks, my injury is always on my mind, if I get back to surfing big waves, that’s just a huge bonus for me.

If these injuries didn’t happen, do you think your passion for surf would be the same? We’d be seeing you on the cover of Tracks on a foil or SUP?
Ah yeah maybe haha, like you get desperate after big swells for more big swells, and then you get stuck in small waves, It kills you. But I reckon I’d still love it the same. Injuries just help to give me the extra stoke for when the surf is shit, when the waves are average I’m so happy, it really changes everything. Put it in perspective, all those meds that they give you, painkillers and all that shit, and when it gets taken away from you and you can’t do it, that’s where depression plays a role, it’s like surfing, so many big waves, traveling for huge swells, and when it gets taken away from you, your body is just so used to so much excitement of surfing, so as soon as that’s gone, it's a fucking weird feeling. 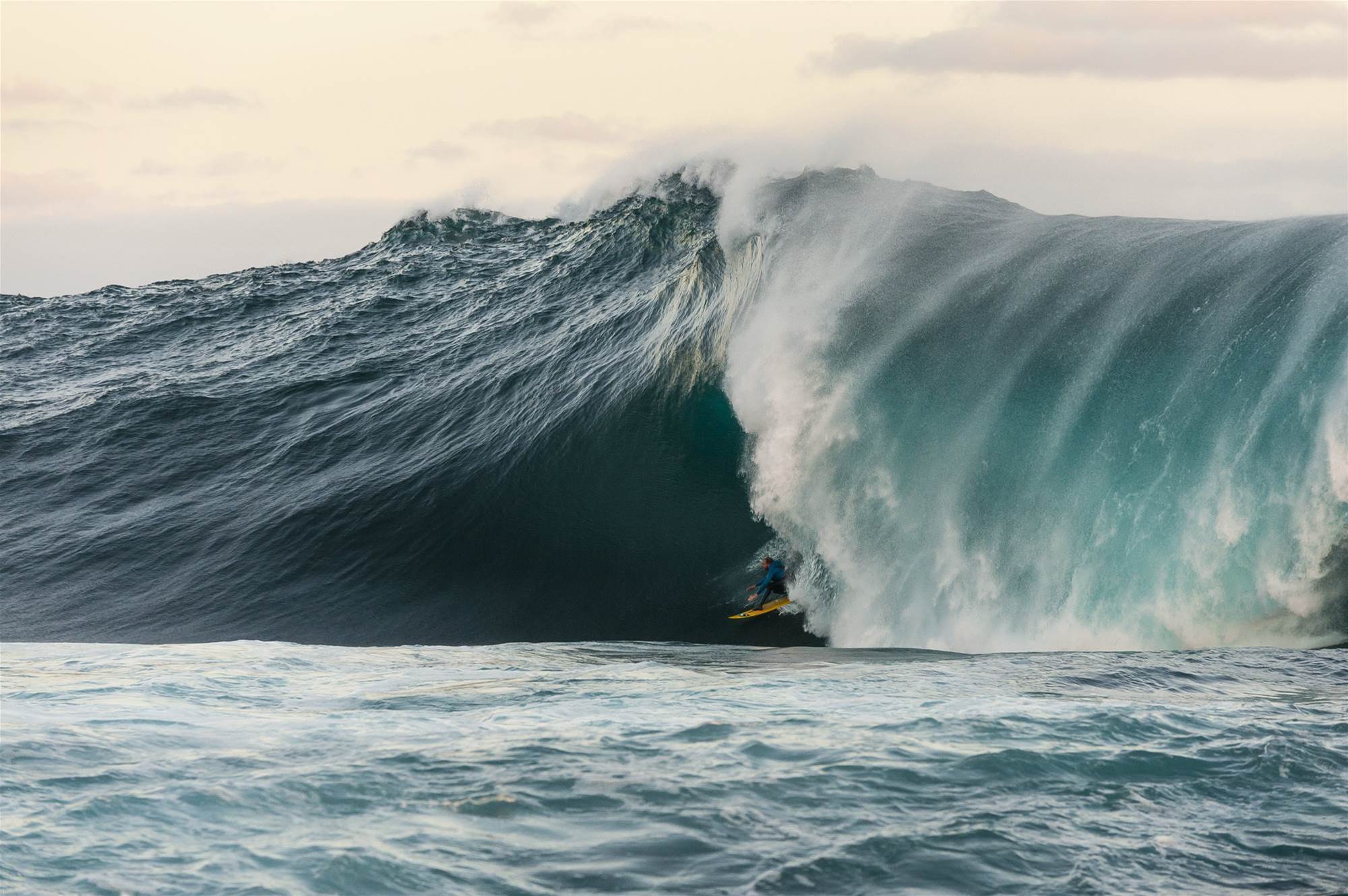 Mark suggests he would love to surf the Right again.

You must be stoked for some of the swell that’s come through Snapper then. So what does the future look like from your eyes? Now that Parko has called it, any signs of packing the bags with him and Mick?
Ah Snapper is absolutely amazing right now. I try not to be to specific with goals, I don’t want to push deadlines on myself, and just be super stressed out to achieve them, I want to surf big waves again, like a bunch of waves I’ve surfed just one more time. If I could surf The Right, Shippies, Jaws and even Nazare, because I never got around to Nazare before, just to pack the bags on a massive day would be sick. How long it takes me to be able to do that… I don’t know. I’m hoping to surf just one more solid swell at Jaws early next year, I feel I could surf it now, but I just won’t be able to handle the wipeout. That’s the only silver lining about the boys retiring, I get to surf with them way more. If they are frothing to do trips, I won’t say no. Like Mick has been frothing lately, and Taj if he wasn’t injured, and that’s exactly what Parko is like, they all would just be frothing. But I hate that they retired, I almost don’t like watching the WSL anymore without them on it, But for me, it makes it more guys to travel with so that’s pretty sick. And in the water, those guys push you harder than anyone because they show you what’s possible.

Ah man, the WSL…
Yeah, well it’s going to be hard for Aussies, if we don’t get a crop of guys that can compete with all these other dudes, I feel the interest in the WSL from the Australians will drop off, because everyone will get sick of watching everyone else win, we’ll get sick of it. History will repeat itself. There will be a huge resurgence of free surfing. But it’s never been better produced, the WSL do the most amazing job bringing the surf to us, it’s crazy how good it is. But you just want to see an Aussie do good, well more of them.