The forecast for the rest of the event promises world-class Margaret River surf conditions Luke Stedman has a chuckle with the waterpatrol after getting swiped a years back. 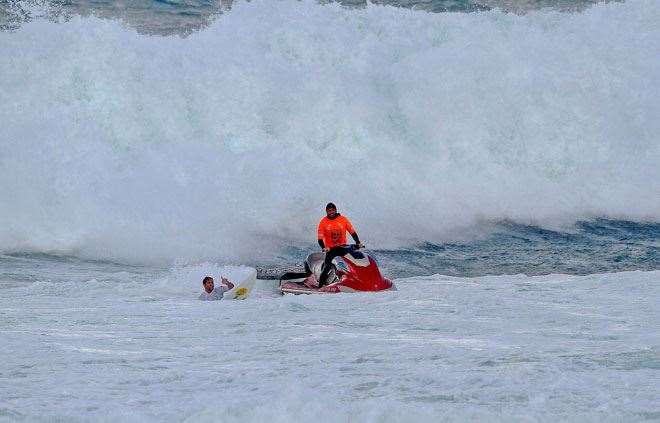 Luke Stedman has a chuckle with the waterpatrol after getting swiped a years back.
It was the calm before the storm. After two consecutive lay days at the Drug Aware Margaret River Pro, competitors are on standby for a possible afternoon start as the swell begins to fill back in at Surfers Point.
The forecast for the rest of the event (Thursday – Sunday) promises world-class Margaret River surf conditions, which will test all of the pro riders on the second stop on the Women’s World Championship Tour and the first of the Men’s ASP Prime events for the year.
As the competition window tightens, Contest Director Mike McAuliffe is hopeful of running the Round 3 non-elimination heats for the Women this afternoon.
“It may be a little frustrating today as we wait for the swell to come in,” explained McAuliffe. “But we are hopeful that we can get four to six heats done this arvo to give us a little breathing space for the rest of the week.”
An excellent forecast for the rest of the competition waiting period is expected with perfect conditions set for both the Men’s and Women’s finals on the weekend.  Surfing veteran and Margaret River local Mark McAuliffe is the best placed man to predict the upcoming conditions, tipping plenty of hours of surf action in the coming days.
“We are set to see the biggest swell of the event so far.  Thursday will see a return to solid six foot plus waves with offshore winds.  Saturday looms as the biggest day so far, much bigger than late last week when the Trials were held,” predicted McAuliffe. “We expect to see really big Margs on Saturday.  Well over ten foot and the winds are favourable.”
With the big swell forecast to hit Surfers Point, the Association of Surfing Professionals (ASP) have agreed to modify the rules in relation to jetski use in the event.
“We have arranged additional jetskis to get onto the event site. ASP have agreed to relax the rules so that we can have one jetski per surfer in the water for the remaining competition days,” confirmed Event Director Mark Lane. “With the massive swell coming it will help with surfer safety but also mean we can get them straight back out after a wave to maximise the surfing time for everyone.”
Lane confirmed great anticipation and a buzz of excitement is looming around the event site as the world’s top surfers ready themselves to be tested in the big, powerful waves that the region is renowned for. “It is going to be BIG! Every day from now it is only going to get better, better and better.”
With Margaret River returning this year to the World Championship Tour for the Women, many were hopeful that the coming swell may eventuate.
Jessi Miley-Dyer, the ASP Women’s World Tour Manager summed up the thoughts of all of the leading surfers when asked for her comments. “Personally, I'm really pleased to have a big, powerful reef break back on tour as it will provide the girls with a venue that tests the foundations of power surfing,”said Miley-Dyer. “I think everyone is going to be excited to see the Top 17 in some quality waves out at Surfers' Point and watching the new generation of young women do battle with the elements and one another”.
Competition is expected to begin early tomorrow in excellent conditions. Surfers will be on standby from 6:30am with up to 11 hours of heats planned.

Watch the action live online at www.margaretriverpro.com and live on Time Warner Cable in the US and Fuel TV in Australia from Thursday.