It was only a few years ago that tow surfing was thought to be dying a slow death. The rebirth of paddle surfing, especially at Jaws and Cloudbreak, had meant that anything involving a jet ski just wasn't on. Shane Dorian was on record as saying that tow had destroyed big wave surfing. Laird Hamilton was suddenly about as cool as your dad turning up to a school dance, with a cooked casserole, a hand-knitted cardigan and a pack of condoms. ‘Eddie Wouldn’t Tow’ became a war cry for a new generation that wanted to surf, or at least watch surfing, done by paddle power alone.

However, this week has shown that tow surfing has well and truly made a comeback. The rise of Nazare, and the WSL’s new Nazare Tow Challenge, has played a part. The continued discovery of new slabs has also aided their relevance. Don’t believe us? Here’s some examples from just the last week where jet-ski assist has shaken the surfing world.

The Best Rescue Ever

If Lucas “Chumbo” Chianca goes on to be the best big wave surfer of his, or any, generation, as many believe he will, he might have to thank Ian Cosenza. Here on Wednesday this week Cosenza performs one of the most outrageous rescue acts ever seen on a ski, somehow surviving a 50-foot Nazare waterfall on his head and riding out to safety. If that isn’t fucking cool, we don’t know what is.

West Aussie’s hard-charging bearded dragon Kerby Brown has been pushing the boundaries for a decade, but his latest clip at “The Left” might be his most jaw-dropping yet. Surfing alone on a slab that is barely rideable, even with a 1200 Yamaha, Brown repeatedly stuffs himself so deep you fear for his life.

Saw @travisrice in the channel so I thought to myself LFGB!!!! 😤💯 x 📸: @aaronlynton @hurley @redbull @tagheuer @nike @gopro

Kai Lenny might be the surfer most responsible for keeping the tow flag flying. Last year when the Jaws Paddle event was canned for being too big, his high-performance tow session changed the game. Then this week, when Jaws broke properly for the first time, he was at it again. His massive airs, huge loops and general tracks on a wave are a pointer to where big wave surfing is headed. Mind you on the same session he ended in hospital and his ski on the rocks, so maybe it’s not all it's cracked up to be.

The Biggest Wave Ever Ridden by a Female

Back at Nazare, now the tow temple, French big wave surfer Justine Dupont caught what she’s calling the greatest wave of her life. Many think it may be bigger than the 68-foot wave ridden by Maya Gabeira that is the current Guinness World Record. With Justine and Maya both stationed in Portugal this winter, and each improving each year, this could this year we see the largest wave ever ridden by a woman.

Of course, mechanised water bikes aren’t always particularly fun, cool, or smart. We’ll put this in, well, because it is simply the best footage of jet ski that has ever existed. Enjoy. 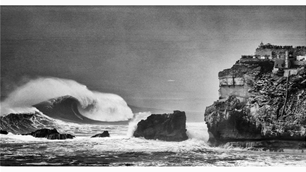