The story behind one of the best waves ridden at Kirra during Tropical Cyclone Gita.

In 2018, a good wave is measured by the times it has been re-shared and posted on social media accounts. That’s what happened to 21-year-old McKenzie Bowden after he locked horns with a beast at Kirra on Monday. Hailing from Whangamata on the Coromandel Peninsula in the North Island of New Zealand, McKenzie now resides in Tweed Heads. Which is fortunate given the proximity to the Superbank and the Gold Coast surf industry mecca. One of the standout waves of from Tropical Cyclone Gita swell belonged to McKenzie, but he almost missed the swell completely. He spoke to Tracks exclusively the day after his phenomenal wave at Kirra put him on the map.

Tracks: How would you rate the past 48 hours’ surfing Kirra and the Superbank?

McKenzie: It didn’t start off well at all. The day the swell came we were all kind of panicking, running around and waiting for the tide until late morning. I had just got some boards that had been fixed and there was still some resin left in the fin box. I tried to pick it out because my fin wouldn’t click in. So, I was hustling away thinking, ‘Oh my God I’ve got to get out there’ when I should have just taken a deep breath and settled right down. I ended up pushing too hard in a rush and I ended up stabbing myself in the hand. Right in the webbing of my thumb and index finger. It went right to my palm and it was just pissing out with blood. I was thinking, ‘Oh no you are kidding me, now I’m not going to surf…’ I had to drive myself to hospital and fortunately I saw a really cool guy who surfs that cleaned it all out and stitched me up.

How long were you in the hospital for?

Were you freaking out about the waves you were missing?

Oh, I was definitely freaking out. All my mates were like, ‘We’re getting out there, it’s pumping!” I still wanted to surf but it was almost like life just went, ‘Mate, just settle down and take a breather.” And that’s sort of how I kind of approached the whole swell. I thought it doesn’t really matter, just cruise. I ended up waiting that whole day out and surfed that night and got a whole bunch of good waves when I wasn’t expecting much. The doctor obviously said not to surf because it would get really infected but I was definitely not missing the swell of the year [laughs].

I think everyone can relate to spinning their wheels anticipating a swell. But it sounds like you had let go by that point and that was your salvation?

Yeah, I was sort of more focused on trying to duck dive with one hand. Just trying to be out there to cruise and enjoy, it isn’t a big deal. Then I ended up lucking into a few nice ones. I dunno, I think maybe it just put me in a nice headspace because the crowd can be so ridiculously intense.

@mckenziebowden on a screamer this morning. @dbahboardriders are happy to be home 😜 #battleon #chur

Tell me about that wave, were you whipped in or paddle? Did you have to fight for it or just happen to be in the perfect spot?

I just happened to be in the perfect spot. I actually took off on a really bad one before and was just doing the paddle round and I was sort of midway through Kirra where the bank was going off really nicely. This set came through which was pretty gnarly and this wide double up came straight to me and I was like, ‘Woah I’m in the spot’. Ian Gouveia [Brazilian WSL CT surfer] was right next to me and I saw him scratching into it as I was scratching into it and I thought, ‘Oh I have to go.’

For the unenlightened, describe the vision?

I just scrapped into it and I was going down the face and I almost caught a rail bottom turning into it and went, ‘Holy shit’, and then looked up and was like, ‘Holy crap…’ I high-lined up into it and thought this is getting kinda square and sketchy so I had to get super low. I felt super deep and I almost caught a rail when I got high up in it, then I just dropped down and it opened up. I was like, ‘Oh shit I’m in it!’ I was just squatting and holding my stance and it kept opening up and I just stood up at the end and it sort of threw me out and I was like, ‘Oh my gosh, was that a good one or did I blow it?’ I couldn’t hear the whistles, you know normally people are frothing and looking into it. I started wondering whether I was deep enough or did I blow a sick one. Then I saw the footage and I thought it had to be a pretty good one. I had a few messages from people too saying they saw @happilystoked’s Instagram story asking if that was me.

Was it the most memorable wave of your life or have you had better? It sounds like you are still questioning whether it was even that good.

I dunno, it all happened so fast and I hopped off thinking, ‘Oh fuck hopefully someone got that so I can see it but I’m off to get another one.’ Then I caught one crap one in and ended up running back up to Greenmount and got washed in so I didn’t really get another good one.

Did you see anything heavy go down? And what was it like in the lineup?

I saw some incredible wipeouts. People just paddling into things and me thinking, ‘Can this guy even make it to his feet’? And then just watching people throwing themselves over the ledge and getting smoked. There was so much power in the swell that you would get smoked on even the small ones and dragged so far down. If you got stuck on the inside it was actually kind of scary. There were definitely some monsters coming through and I definitely got my share of wipeouts too.

Is it sensory overload when you’re surfing in conditions like that?

For sure. It’s pretty hard to get in the zone and concentrate when there are so many good waves. It was weird though because there wasn’t a whole lot of people that morning because it was looking pretty throaty and gnarly. I saw Brenno [Brent Dorrington] get a few and we thought, ‘Shit we better be careful out there.’

What was it like watching Brenno, Taj, Parko and that crew doing step offs? Were there any close calls?

I did see Taj get faded on a few good ones when he was pretty deep. I remember seeing Brenno get that one. I just remember it was the biggest set that had come through that actually held it. At low tide it actually started closing out. It was just washing through which is pretty crazy for Kirra. You needed that mid-tide and I swear it was just on that perfect tide and that wave came straight to him and I saw him get blown out the back and thought, ‘Wow’.

What about the infamous DHD ski stack, did you see that?

Yeah, I saw DHD driving the ski when they stacked it. That was interesting. [Laughs]. Everyone was going, ‘who’s that idiot? Who’s that guy kooking it on the ski?’ We were kind of worried it was out there. Lucky there wasn’t a set after it because it would have got washed straight in.

Back out there tomorrow or are you done?

I can actually barely move. I just had a really fun surf through Snapper to Greeny because it has dropped off so much. It’s just as perfect as it gets for doing turns. I’m pretty torched. I’m going to have some curry for dinner, go to sleep and wake up tomorrow and help Dad do some landscaping work. 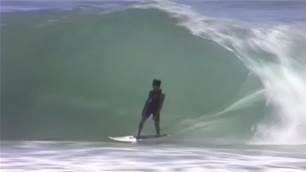 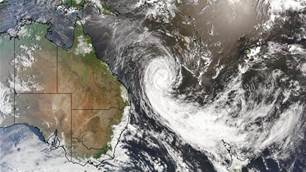