It’s funny how some guys qualify quietly, without a whole lot of hype or fuss. Seth Moniz might not be a complete stranger to fans of pro surfing, but he’s no John John Florence either. Following a semi-final finish at Haleiwa, however, he’s set to join his more famous Pipe stablemate on next year’s tour and grab himself a piece of the limelight.

So who is he exactly, and what’s he going to bring to the table?

Like a lot of kids making an impact on the sport these days, Seth is a second-generation pro surfer. His father Tony represented Hawaii on the tour in the 80s and then sired a whole brood of talented shredders, including Seth’s older brother, Josh, who won the Volcom Pipe Pro this year, and sister, Kelia, a two-time longboarding world champ.

Apart from solid surfing heritage, Seth’s got a natural Hawaiian affinity with big waves, having staked out a place for himself in the hellman epicentre of Pipeline and apprenticed himself to Shane Dorian at Jaws for a session. If it’s big and round at Chopes or Pipe next year, expect to see the youngster charging as hard as anybody.

Then there’s his wild, elasticised air game. Remember the kid doing that huge backflip at Waco when the Texas pool first hit our radars? That was Seth. Remember the upside-down backhand air reverse some freak threw down at the US Open this year on a gutless two-footer? Also Seth. The guy has pop and he’s not afraid to use it. This X-factor will serve him well next season when he’s pitted against all those high-flying Brazilians, and also set him apart from the older guard who can’t draw upon a tweaked-out rotation as readily when the judges call for it.

@americanwavemachines you guys did it🙌🏾. Thank you for making the perfect section every surfer dreams of and thank you for including me for the first ever test. Gonna be crazy to see what guys can do on this wave in the future. 💦💦💦 🎥 @rsmallcheck|| @bsrcablepark

Finally, and perhaps most importantly, he’s proven himself a savvy and versatile competitor. Look at his ascension through the QS ranks. 142nd in 2016. 2nd in 2018. That’s a rapid dash. And he’s done it off the back of results in a wide range of conditions, from a runner-up placing in the dribbly beach breaks of Chiba, Japan, to a semi-final finish over the weekend at unruly Haleiwa. He’s yet to break through for a big win, but with the pressure off coming into Sunset, who knows what he’s capable of.

Either way, Seth Moniz is headed for the big leagues. He mightn’t be the biggest name coming out of the islands, but with that authentic Hawaiian mix of new-school theatrics and old-school heroics, there’s every chance we’ll be hearing a whole lot more about him.

Dream came true yesterday. Couldn’t thank @rainoshayes enough for being in my corner all year, he really brought out the best of me. My family and friends who came down to support yesterday THANK YOU! That meant a lot to me. 2019 WCT✅ 🎥 @coleyamane 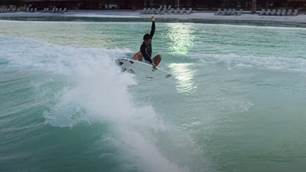 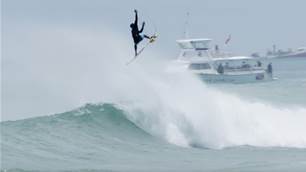 Seth Moniz Has Come to Fruition 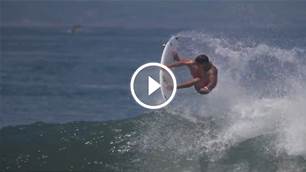