Until Today Pipe had been a somewhat anti-climactic affair.

Sure, there were some exciting moments late yesterday, but as finals day dawned It seemed the trend of alright, but not great waves would continue.

The first heat of round four showed some promise when Kolohe muscled his way through a hefty Backdoor pit for a 9.93. However, the next few heats would struggle to find anything comparable. Ryan Callinan, Josh Kerr and Nat Young would only amass totals of 2.77, 9.24 and 1.77 respectively in their match up… hmmmm.

Then out of the blue, somewhere in the back half of the round 5 clash between Filipe Toledo and Pipe-Master-to-be Michel Bourez, the weather and waves turned on a dime. I guess that’s what can happen on a rock stuck out in the middle of the ocean.

Out of nowhere, Backdoor funnels groomed by the breath of angels began pouring through and Felipe and Michel gorged on the bounty. Filipe locked in a perfect 10 on the newly arrived perfection, but it wasn't enough to take down Michel who snagged a 9.57 and the win on the very next wave. 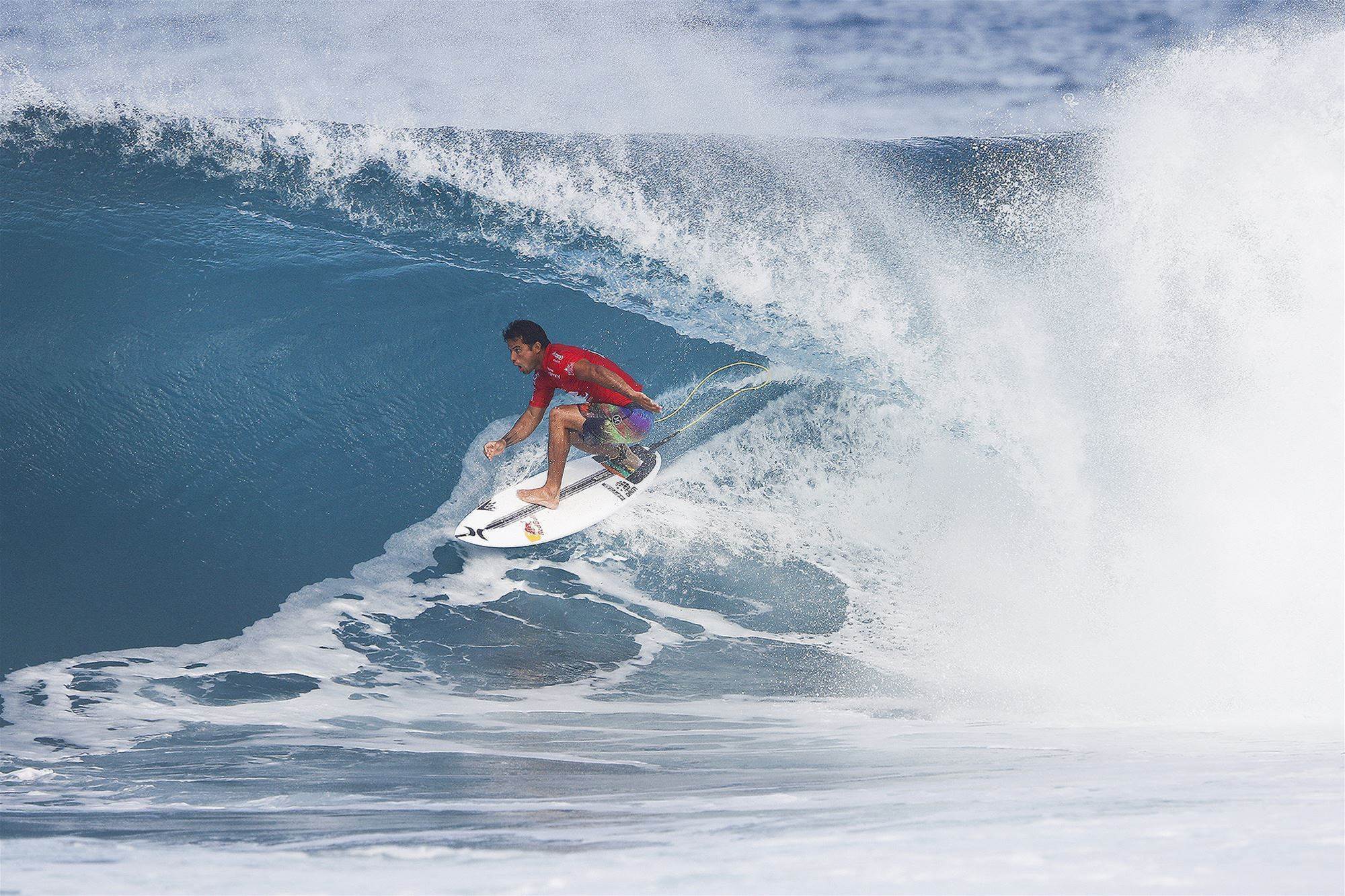 Finally Pipe (read Backdoor) had come to the party and high scores rained from the heavens.

The quarters rolled around and the waves continued to pump. In the first, a ravenous Kolohe dispatched Jeremy Flores who, despite the loss, looks to have found his surf stoke again. He beamed in each of his post-heat interviews and he looked on-point in the water.

Quarter two pitted the man on a roll, Michel Bourez, against the pride of Hawaii – John Florence. Given the conditions, it would have taken a brave man to bet against John for the win, and in the early moments of the heat everything seemed to be going to script. John nonchalantly banked two early scores a 7.33 and 6.67, but there were tens coming through and you just got the sense they weren’t going to be enough … and they weren’t.

In John's own backyard, Michel stole all the bombs from under his nose, banking an 8.77 and an 8.43, leaving John chasing a 9.21. Pipe would give it’s favourite son one more chance when the best looking piece of water of the whole heat stood up and aimed itself right at John. He positioned himself deep and slid late into the cavern. If he found an exit, the win would be his, but the foam ball bucked and sent John into the roof and over the falls – The Pipe Masters would elude him for another year. The result however, was enough to give him the Triple Crown. Not a bad consolation prize in the wash up of a dream year. 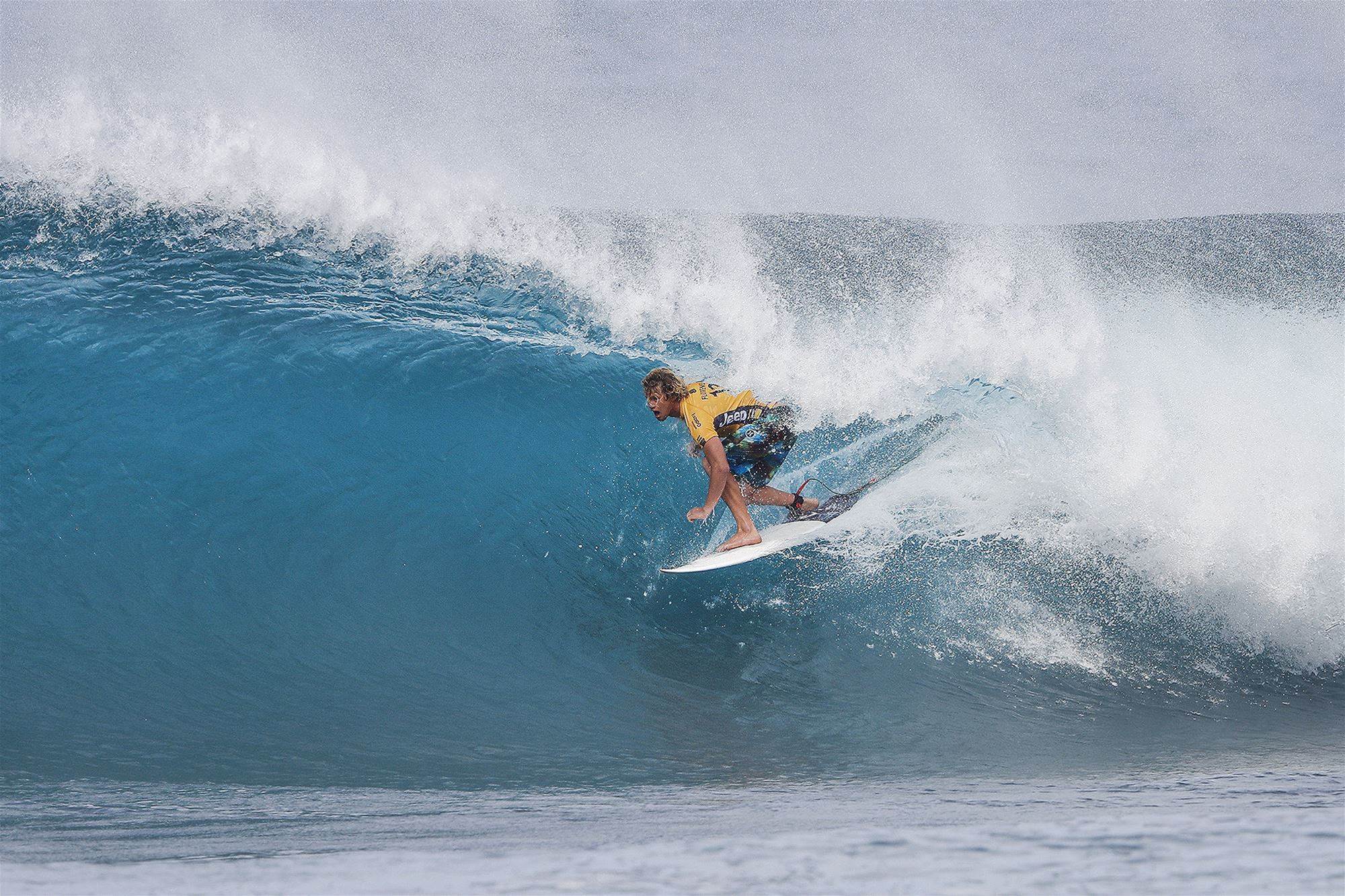 JJF wasn't able to claim the Pipe Masters but did take the Triple Crown. Photo: WSL/Cestari

Before today, it had been the secondary narratives that had given the Pipe Masters a heartbeat, and at the centre of this was Kanoa Igarashi. At the start of the event he had been burdened with the knowledge that a strong enough finish could secure his good friend Zeke Lau a spot on tour in 2017. All week speculation suggested that a quarter-final finish would do the trick, but due to some last minute shuffling this was pushed out to the semis. A highly unlikely scenario for a kid who had only made it past round three once this year, and is not exactly known for his Pipe prowess.

However, here he was in the Quarters surfing for the chance to do just that. His opponent, Jordy Smith had looked deadly all event. All season in-fact. Lets not forget he took out the Vans World Cup what seems like an eternity ago but in reality was only a week or so. A win would be a tall order for Kanoa.

It was a strong start by the South African who banked a 7.57 on his opening wave. Nervous groans emitted from the Quik house. They soon turned to nervous screams however when Kanoa drove his way through a nail-bitingly long Backdoor funnel and found the exit for what looked like a certain 10. The Judges decided to keep the contest interesting though and threw a stingy 9.93. Kanoa soon backed that up with an 8.10 and penned a happy ending to one of the feel good stories of the comp. Zeke Lau would join the tour in 2017, and he owes Kanoa for life!

However, where there are winners there are also losers, and somewhere a freckled Californian cried a salty tear onto the Hawaiian sand. Nat Young belongs on tour, but he will now spend 2017 grinding on the QS to retain his place.

Once the excitement and despair settled, it was time to return to the comp and finally give someone this bloody Pipe Masters trophy.

In the semis Michel Bourez continued his roll, dispatching the little rascal, Kolohe Andino and earning his place in the final. Semi two saw Kelly Slater take on the feel-good kid Kanoa Igarashi, a man who has clocked up more than twice as many contest wins as years his opponent has spent on the planet. It was a tight affair but once again Pipe smiled on Kanoa. Just as it looked like Kelly had iced the win, the biggest set of the day rolled in. Endless closeouts trapped Kelly inside and offered Kanoa nothing. That was until the last wave of the set miraculously peaked up for Kanoa, who pounced and stood tall through its innards and exited bound for his first final.

It seemed Pipe had expended itself with that set and sadly the final was an anti-climax. Only five waves would be ridden and they were average. In the wash up it was Michel Bourez, with a heat total of 7.53 who would be crowned Pipe Master for 2016.