The form guide on Mick Fanning and the shirt we had to give him.

Mick Fanning could only smile when Tracks presented him with a limited edition T-shirt designed to honour his quest for a fourth world title. Exiting the water at Sunset after progressing through his round three heat, Mick happily accepted the limited edition t’ which features art work by Tracks resident illustrator, Johannes Leak. As the picture above indicates the shirt borrows its motif from Mad Max and features Mick as the Road Warrior under siege from the three Brazilians who are challenging him for the title – Filipe Toledo, Gabriel Medina and Adriano de Souza.

The shirts caused quite a stir around the contest area with commentator Todd Kline insisting he have one, but suggesting he might get into trouble from the WSL if he wears it during the broadcast. It was disappointing we didn’t have one big enough to fit Kai Garcia’s (aka Kai Borg) hulking frame. “Of course I’m in the Mick camp,” bellowed Kaiborg after he’d dressed down yours truly for neglecting to say hello when walking past on the Sunset track. Note to self. Always say hello to Kaiborg.

Kaiborg’s sentiments towards Mick seem to reflect those of most of the Hawaiians.When asked about who they were throwing their Aloha behind in the title race most of the locals were quick to point out that Mick was their guy. Knowing he has the support of the local Hawaiians could be an important factor for Mick when he is confronted by a throng of Brazilian fans on the beach at Pipe. The North Shore is a small place and the ‘vibe’, for want of a better word, can count for a lot when you are chasing a title. If the Aloha and its ambassadors are on your side it can be a powerful force and if they are against you then it can likewise feel overwhelming. Fortunately for Mick, he can rely on an Hawaiian support network that will make their presence felt. 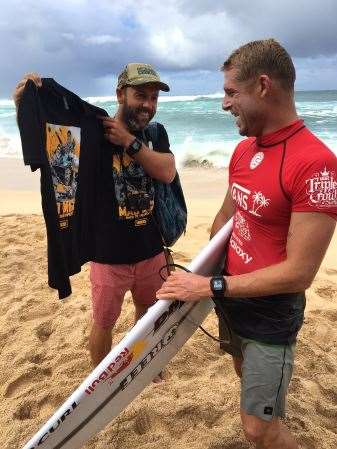 The Ed' handing Mick Fanning his Mad Max inspired tee, featuring artwork by Johannes Leak. Keep an eye out for chances to win one of the limited edition prints.

In his third round heat at Sunset today, Mick looked razor sharp on his DHD and was only upset by Dane Reynolds enjoying one of those high points when his ‘on’ moments just happens to occur when he’s wearing a singlet. A second place in the four man heat did however secure Mick a place in the next ground. One knee-buckling, doggy door exit in front of a sledgehammer, Sunset lip had the Mick fans wincing  but he emerged from the water unscathed, confident and typically generous with his fans.

While the Sunset event may serve as a welcome distraction from the world title head-noises, Mick was also competing to fulfil his responsibilities as a WSL surfer. According to the WSL criteria, surfers on the elite WCT tour must contest at leas two WQS events in the year – one inside their region and one outside their region. Mick competed in the Australian Open of surfing earlier this year but prior to the Sunset event hadn’t paddled out in a WQS singlet outside his region.

A week is a long time to think about a world title in Hawaii. How you fill the void between now and the start of the Pipe waiting period can have a major bearing on your mindset. Mick has been in that space a couple of times before, which should work to his advantage. Outside of the contest he’s been free surfing down at  Off The Wall and Backdoor regularly. According to astute observer and Hawaiian lifeguard, Dave Wassel, Mick has looked supremely confident on the stretch where his fate will be decided. “Even on the worst days he’s getting the best waves,” suggest Wassel in his famously upbeat tempo.

The ability to pluck out the gems will prove critical if the pattern of North swells continues. The North Swells tend to build up sand and transform Pipe into a kind of right, Reef/Point Break. If we are to see more classic Pipe conditions, we’ll need a solid day of West swell to blast away the excess sand and more West or NW swell to follow. That could well happen with the big swell forecast for this weekend. The moral of the story however is that Pipe is nothing like a perfect Indo reef. Sand build up and slight variations in swell direction have a big impact on conditions and it rarely breaks the same way two days straight. The contenders will have to be ready for anything.