Our break can get pretty crowded with visitors, so we, in our desperate drive to be able to surf uncrowded waves, have cultivated the art of surfing at night. Preferably by the light of the full moon.

Now, surfing by the light of the full moon is pure magic, but this time we thought we’d up the ante and surf in the black hole in between the setting of the moon and the rising of the sun, the last three days or so before the proper full moon. Surely, we reasoned, there’d be enough light left over to see us right, and, extra bonus, we’d get a few more days of quiet surfing delight.

So we stood on the beach in the dark and watched the moon going yellow and sinking towards the far end of the bay. We rubbed our chins, scratched our noses and fished unspeakable things out of our ears, and, satisfied with the prognosis of glorious rides, we rushed to get suited up and head out.

Four of us mob waddled out into the night: the Cork, natural-born flotsam and jetsam in the water, bobbing around aimlessly and rudderlessly, hopelessly out of control no matter the conditions; Chief Switchfoot, renowned ambipodous stance changer and shapeshifter; the Snake Catcher, scourge of snakes, drop-ins and anyone who looks at him funny; and myself, the Baboon, putting the “ur” back into surfing neanderthal-style, champion knuckle-dragger on tiny waves.

The moon watched us go, winked knowingly, gave us the finger and disappeared over the horizon, leaving us groping around blindly in pitch-black dark.

We stumbled and fumbled around impotently, and splashed out into the breakers. We prided ourselves on our bat-like ability to see in the dark, honed by many years of doing exactly this.

To prove the point the Cork, bobbing up and down like a man with no arms and no legs stuck under a recirculating waterfall and running out of air fast, decided he spied movement in the blackness in front of us, turned around, paddled asthmatically, and disappeared in a surge of black water, felt but not seen rising and falling underneath us. We peered into the night for the tell-tale signs of a wave caught successfully: the dark silhouette of a black wetsuit against a starless sky the colour of tar over water like charcoal. Good luck with that. We looked at each other and shrugged. There were no screams of distress coming back at us, so presumably that meant that, at the very least, he’d survived long enough to get out of earshot. It would do.

The Snake Catcher thought he saw a chance, jumped by feeling onto the next bit of lifting and falling water, and disappeared into the void.

With Chief Switchfoot still labouring and straining to make it out somewhere behind me that left me to take my turn, and so, squinting so hard my eyes bled, I identified a bit of black just that touch darker and shadier than the bit right in front of it, and so I turned my back to it, paddled profusely and ineffectively, and, with the rise of my tail and the pitching forward of the nose, the only two bits of sensory input available, I jumped to my feet, dropped into the hole and executed a perfect judges’ favourite award-winning bottom turn that no-one saw, and, therefore and by definition, didn’t happen.

Only to be met by screeches of panic and alarm, rising in pitch rapidly and near-hysterically as I got closer to their source. A fraction of cloud parted, a star threw a bit of light down, and in the split second of a blink of an eye I saw, right in front of me, the two shapes of the Cork and the Snake Catcher entangled in a mess of twisted legropes, dinged boards and bruised egos. The Cork had come a cropper, the Snake Catcher had crashed into him, hard on his heels, and I was about to take both their heads off. I screamed ‘aaaarrrrgggghhh!’ They replied ‘uuuuuurrrrrgggghhhh!’ and the last thing I saw was two shadowy expressions of mortal dread flash across their faces before they dived under the water and I threw myself backwards over the back of my wave, clutching my board so it wouldn’t become a Free Agent For The Voluntary Reduction Of Rampant Human Overpopulation On Earth.

We stuck our heads out, glared at each other, exchanged pleasant Christmas greetings, and paddled sideways quicksmart, just in case. There was every chance of the Chief being hot on our heels to add to the pile-up.

As luck would have it I paddled into a good spot, felt the water move underneath me and seized the opportunity to jump and go. I was rewarded with a beautiful long ride in perfect darkness, eerily gliding along without sound or vision, crouching low for balance, cruising blindly and steering by pot luck.

When I paddled back up again a tiny bit of a faint glimmering of pre-dawn had crept into the proceedings, giving just enough distinction and perspective to the darkness to be able to distinguish shapes. And what I saw was the Chief on a black monster, sliding onto a perfect slope, switching from natural to goofy-stance in mid-air, and bending down low as the wall behind him curved over his head, became a perfect barrel, and locked him into the black room. No green involved here. My mouth dropped open as I stared, consumed by envy, my face the only bit of green in the whole black bay. He had just scored the jackpot and had locked himself into a complete black-out tube. Only a very few lucky bastards get to enjoy that.

It turned out it wasn’t to last. As I watched the wave closed out and the roof smacked down with a definite nut-cracker-like impression, and the Chief dissolved into a shower of black foam. I winced. It didn’t look comfortable.

Sure enough, when the dust settled I could just make him out crawling back onto his board, moaning and groaning.

‘Uuurgh! Haruugh! Uhuurgh’ he wheezed, like an accordion with a terminal puncture, inflicted, no doubt, by a music lover with discerning taste.

‘You right there, mate?’ I said, concerned. He didn’t sound too good.

‘Really?’ I enquired politely. ‘No word of a lie?’

Ehurgh ehurgh ehurgh!’ he confirmed, coughing violently and clutching his side like it was made of eggshells.

‘You stack it in there, mate?’ I said, frowning and wiggling my eyebrows for good measure. ‘D’you get hurt?’

‘Hoovergh, hoovergh!’ he spluttered, and lifted up his wrist, shaking it slowly.

I looked at it. Blood was pissing out of it. I looked around. Snowy, our pet Great White who patrols our break and acts like our personal bouncer, keeping other sharks away, might have a pointed opinion about blood leaking in the water.

It was time to get to the point. I leaned forward closer to him, and hissed ‘Did you get the barrel?’ Never mind injuries. We wanna know about waves. First things first. You’ve got to get your priorities right in life.

He brightened up, sat bolt upright, which apparently caused a sharp stab of pain in his side, because he clutched at it and hunched back forwards again. A damaged tragic smile broke over his face. ‘Hooga hooga!’ he nodded emphatically. ‘Harroomph!’ he gestured wildly with one hand, ‘and then ... errrgh ... the board nnngggaaarrrgh!’ he added expressively and brought his two hands together hard with a splash that made me wince and him go a pale Day-Glo orange in the dark.

I nodded appreciatively. It had obviously been well worth it.

After that wave, which had clearly been the ride of the day, or, rather, of the night, he limped back into shore, zigzagging erratically and huffing and puffing like a steam train running out of water.

The emergency department provided him with careful and cautious advice on how to treat his two broken ribs for the next several weeks while being laid up in bed, and bandaged up the cuts across his wrist. They looked for all the world like he’d been trying to slash them on purpose. A stark reminder of the lunatic and potentially suicidal nature of our nighttime ventures.

We hoped the barrel had been worth it and went and bought him grapes. It was going to be a long and dry road to recovery. 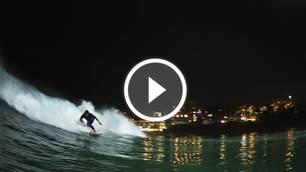