Two Australians in the finals day mix after a day of high drama, big airs and board breaks.

The good news for Australian fans is that Ethan Ewing has learned to win with a low six and a high four instead of dropping a nine and not finding a backup. The eye-catching angles and the silky style are still there but instead of striving for perfection, he’s learned to do what needs to be done. That enables him to overcome crafty competitors like Jadson Andre, as he did in the round of 16. A quarter-final is a career-best result for the North Straddie natural footer and suddenly he looks like the contender Australian fans have been waiting for.

There is, however, a big problem for the face-huggers when we are staring at another day of shifty south swell peaks that reveal themselves as a field of trampolines for the likes of Medina. Against serial nemesis Caio Ibelli, Medina nailed a nine for a single blue-sky-mining spin on an average wave that offered one section. “These guys are changing the sport,” Luke Egan rightly pointed out. They’re not even looking for stereotypically good waves, they want the ugly ones that offer one big section and reduce surfing to a very narrow, gymnastic paradigm.

It doesn’t matter how deft Ewing’s snaps and carves maybe he’s never going to be able to lock in a nine with a single connected move under the current judging criteria.

However, just when it seemed like flight facilities were a prerequisite for smashing big names, Morgan Cibilic paddled out and demoralised John John Florence with a couple of backside wrenches that nearly broke his fins and threw spray as far as Collaroy. After watching Medina fly, John didn’t take the memo. It was a mistake not to utilise his key point of difference and there was a hint of hubris in his reckoning that he could wipe the floor with Cibilic, minus some aerial theatrics (there was one meagre rotation). 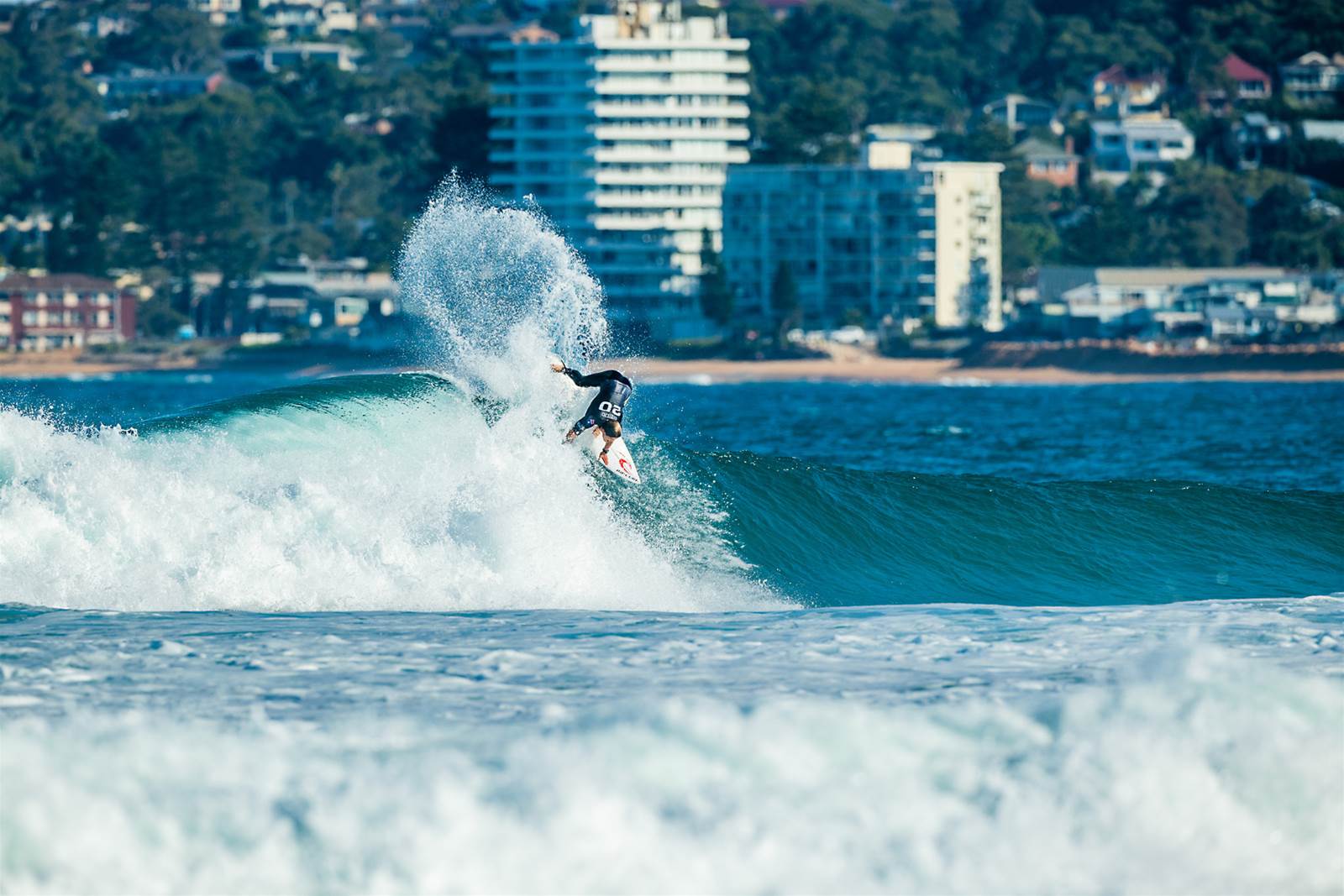 This turn by Morgan was unbelievable. Photo: WSL/Dunbar

John was still pulling six-range scores with his cruisy, backside hooks but his turns looked like lip taps in comparison to Morgan’s full-blown power-jams.  The 8.53 and 7.17 Morgan locked in left John John shell-shocked. For the gaggle of grommets that had shown up to see the white-bearded John John, it was like someone had just killed Santa Claus. It was time to cheer for the little, nuggety guy who was carrying the presents in the form of hefty, backside hooks.

Italo Ferreira had a clear two-phased approach. He paddled out and looked to launch and put Conner Coffin in an impossible situation early. However, when he failed to find the completion he dropped down a gear and surfed at about 80% and locked in a confidence-builder. Once he had the mid-ranger 5.67 (a gruff Luke Egan thought it was low-balled) he went back to the air and stomped a huge backside spin, but left clear question marks around the forward momentum as he stayed on his feet. The judges pulled out the microscope and the slow-mo button and deemed Italo’s landing incomplete, after he was inhaled by the rolling froth. Meanwhile, the commentators gave it to him; even the eternal fence-sitter, Joe Turpel, let go of his diplomacy and backed Italo.

Out in the water Italo made his feelings towards the judges known in no uncertain terms. If they didn’t understand Portuguese they could certainly interpret his hand gestures.

Italo was left chasing a mid-range score with minutes to go and rode out of a rotation insisting the judges give him the points. They did, but it was only enough to tie the result and give Italo the lead on a third wave count-back. While a caffeine-pumped Italo was giving the judges clear instructions, Connor took off, wailed into a backside hook and claimed the win.

The contrasting imagery screamed for audience attention. A livid Italo went back to the locker room and violently smashed one of his best boards, leaving a cool-headed Coffin to conduct the post-heat interview in his relaxed, Cali drawl. It was a heat with a range of controversial calls and you could watch it four times over and come up with a different result every time. For pro surfing ratings it was great. A world champion and rankings leader toppled, a tied heat and a passionate post-heat outburst. Italo came off looking a little like a super-brat, but Rabbit let him off the hook by admitting he’d engaged in similar histrionics when he was on tour. Italo will now have to deal with the psychology of loss after being on what seemed like an unshakeable run.

Jumpin’ Jack Robinson also fell victim to the judges’ strict ‘ride out rules’ and it seems it might be time for someone to step up and deliver a sermon on the nuances of completion to both surfers and fans.

In a year when it seemed like Australia may struggle to find contenders, two surfers from Down Under will line up on finals day – Ethan Ewing and Morgan Cibilic. Medina still goes in as favourite with Yago Dora a definite dark horse.  Meanwhile, in the womens draw many of the big names (Carissa, Steph, Courtney and Sally) are still alive with Tyler Wright the notable omission. Tatiana Weston-Webb and Johanne Defay are the major improvers and both can threaten the usual suspects, as can the uber-confident Caroline Marks. Right now the women’s event feels wide open.

Inside word is that it looks likely to run tomorrow.