Every Sydney surfer knows that you need to have a solid closeout move in your repertoire if you want to get the most out of your daily surf grind. Likewise, a major finishing turn, or single big manoeuvre on a shut-down section, proved crucial for the world’s best on a day when a straight south swell turned Narrabeen into a series of sectiony peaks.

In heat one of the women’s Malia Manuel went from third to first with a single, scything backside hook. The upset win against Steph Gilmore was well-deserved. Everyone else should have paid attention because Malia had provided the blue-print for success – find a good section and go big.

Yago Dora had the system dialed, utilising his silky air game to rotate to victory. While Yago’s results have been volatile since he arrived on tour in 2018 one senses he is on the cusp of a break-out performance.

John John Florence found out the hard way why a single game-changer move was important. The Sydney crowds had shown up to see the blonde-locked Hawaiian with the goatee beard. There was even a feature in the sports pages of the Sydney Morning Herald on John John. When he blasted a single backside fin waft on his opening wave for a 3.8, it looked like he would live up to expectations. However, from that point on John John struggled to ride out of major moves. We saw the same thing happen when he was eliminated by Moragn Cibilic at Newcastle. “It’s becoming a bit of a problem,” uttered Rabbit anxiously from the commentary booth. For a brief moment the world’s most popular surfer was on the cusp of a shocking form slump; headed for the elimination round and in danger of going two events in a row without a major result. As Fred Morais found the best waves and Alex Ribeiro chipped away, John John slipped to third. It took every ounce of his competitive guile and raw talent to hunt down a wobbly left close-out and spin through a clutch rotation for a 5.57. Crowds and contest organisers breathed a sigh of relief when the scores came through, but John John knows he will need to be better if he wants to claim a decent piece of the Narrabeen pie. 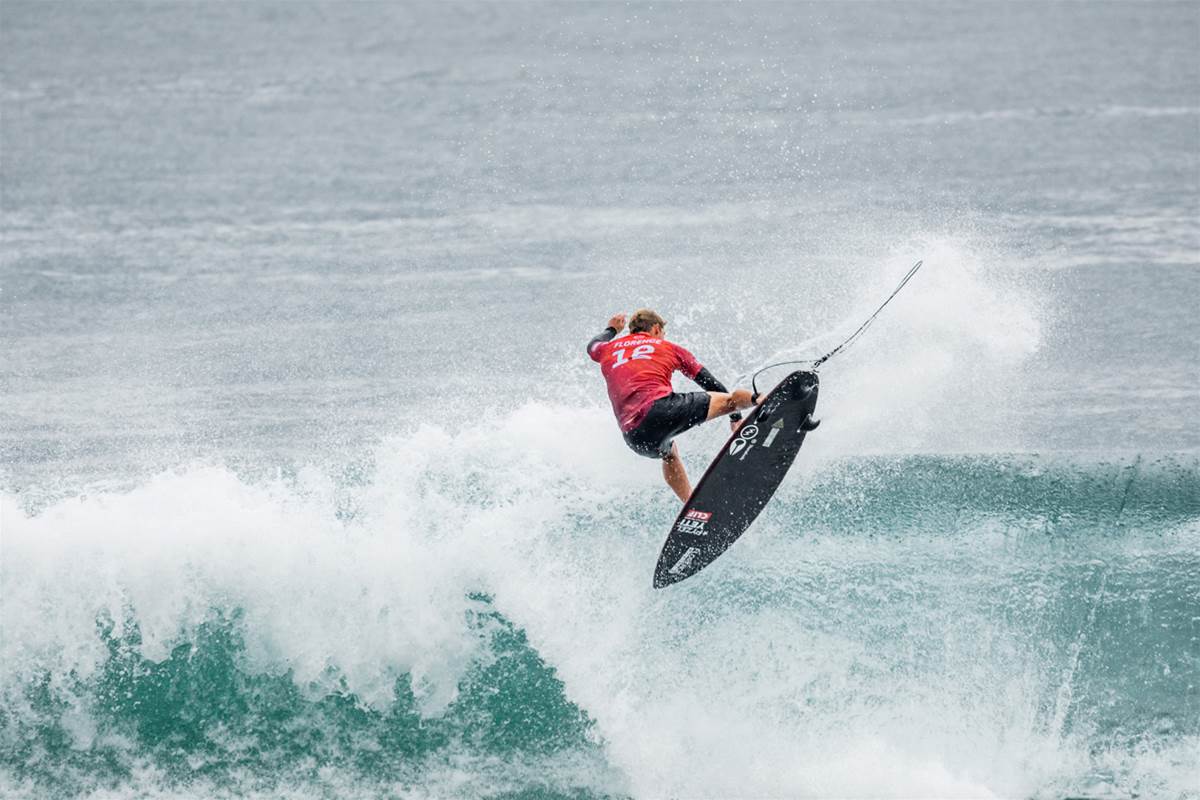 John John had plenty of spin but struggled with his completion rate. Photo: WSL/Cait

Filipe Toledo had a clear advantage over the field because of his ability to get in and out of a meaningful move so quickly. One big turn was important, but Toledo can fit two good ones in where others have to force a second. Invariably the spinning whippet cruised to victory, banishing Mikey Wright and his fresh mullet to the elimination round and reminding him haircuts get you attention but they don’t win heats.

World number two, Gabriel Medina looked like he was in second gear against Jadson Andre and local wildcard, Dylan Moffat, for most of the heat, but he still led comfortably in the latter stages. His final, lofted backside spin was essentially a blocking move to make sure good mate Jadson went through, but it ultimately dropped in his top two. As suggested, Medina has another level he can tap into and remains a favourite for the event.

If Gabby surfs slightly within himself in earlier rounds, Italo seems to be at full-throttle every heat. He's a bottle-blonde entertainment machine who gives the crowds the best of himself every time he pulls on a singlet. Italo puts the rest of the field in the slow lane with his high-velocity spins. Finding a point of difference in three-foot beachies isn’t always easy but Italo is a blur of bleached-hair and yellow-jersey through moves and it’s this speed of execution that is prompting the judges to drop higher numbers. Meanwhile, Newcastle giant-slayer Morgan Cibilic was again on point with his precise meat and potatoes surfing, finishing second behind Italo and in front of a deflated Mick Fanning. 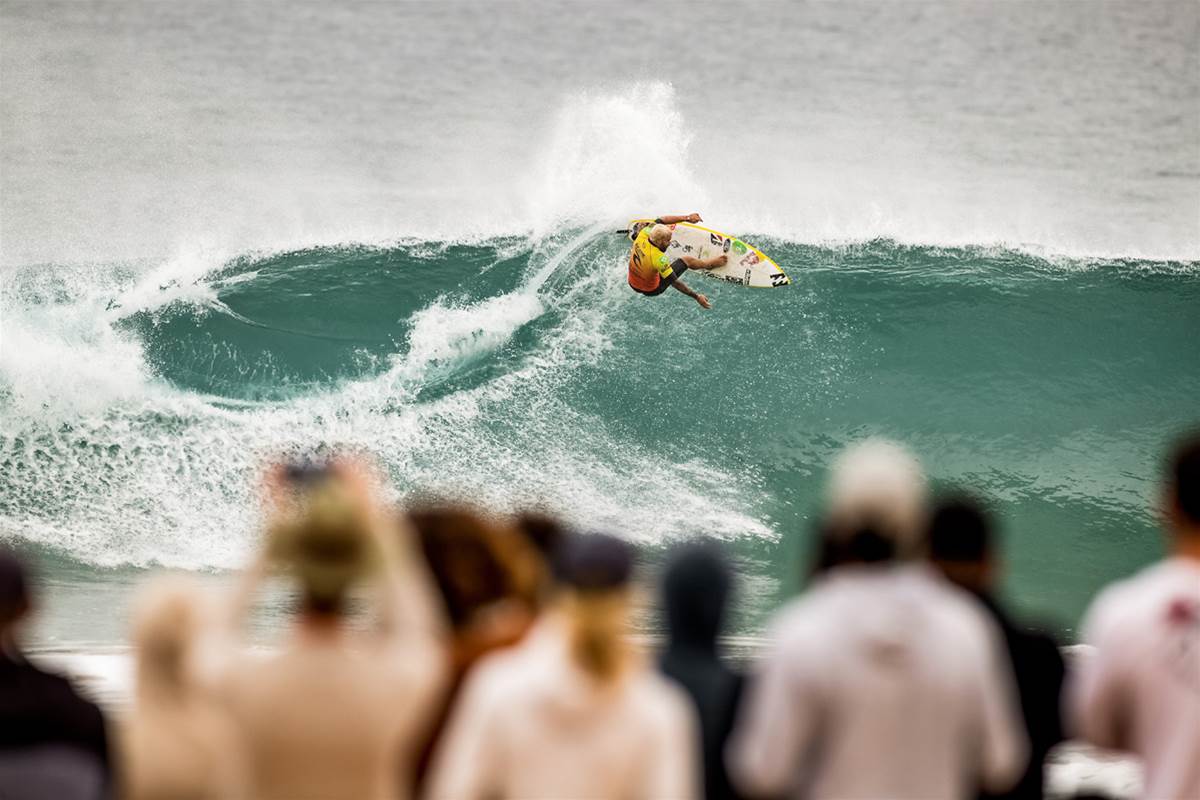 It was overall a good day for the Australians with Ryan Callinan, Owen Wright, and Jack Robinson also posting solid victories. Owen looks to have a little more bite to his surfing on the shorter equipment he’s been riding. When I recently ran into him while freesurfing a Sydney beachie he told me that Kelly Slater came to him in a dream and told him what he needed to do with his boards. This is no word of a lie. The end result, according to Owen, is a board around six-foot-long (he use to ride at least two inches longer) that mashes together Matt Wilkinson’s nose template, Mick Fanning’s tail template, and Owen’s rails and middle section. It’s certainly giving him more whip but will it win him the event? The problem for all the Australians is that in punchy, south swell Narrabeen, it seems you need a pilot's license to really impress the judges. Based on today’s performances that puts Reef Heazlewood and Jack Robinson in the box seat for the Ozis. Reef produced the second-highest single wave score, a 7.17 for his giant slob. Jack gave the lingering crowd plenty to cheer for with his dynamic, final heat performance that featured big airs, a worthy tube, and knifey rail turns. It was apparent he'd made a huge effort to refine and improve his small wave act.

Maybe the swell will kick and tweak east, and I’ll be proved wrong by those with a more classic approach, but right now it seems like unless you can punt on demand the ultimate prize in the Rip Curl Classic at Narrabeen will be out of reach.

Call me a killjoy but it does feel like the new finals-day format does suck a little juice out of each individual event. It will be exciting in the moment and perhaps the challenge for the final-five will become an interesting scenario, but the concept of a world title race no longer exists. You can’t track the rivalry between two or three surfers as they battle for the points lead.

Amongst the best there is arguably a hint of complacency like, “Ahhh so long as I make the top five it’s all good.” All I need is a good day at Trestles (location for the surf-off) and I can still win it. Similarly, there is no real incentive for Carissa or Italo, or another surfer to smash the opposition and claim a big lead. Yes, the finals day system will deliver an advantage to those who finish higher, but it’s a radical departure for surfers and fans. We’ve got no choice but to get with the program and join the new top five conversations, but we’re also entitled to miss the old system a little.