Kelly Slater was possibly the most interesting surfer in the water today. In small, perfect, but fairly soft waves reeling over the Keramas reef, Slater surfed with a bit more passion and flair than we have seen thus far this year. His board looked functional, perhaps a little bit wider than usual, and it was fast and smooth. He added a bit of imagination to his surfing in a day that was looking at common-or-garden variety air reverses for the big scores.

A neat little air in the beginning of the heat showed that he was interested, and then out of the blue, a carving 360 on the outside was the surprise move, showing the judges and spectators that there is more to Keramas than a reo, a face gouge or an air reverse.

The highest score of the seeding round came from Filipe Toledo however, who pulled off a massive air reverse for 9 points,which he added to a 7.17 for a 16.17 heat total. Filipe sneaked off across the reef, so deep that he probably could have gone left, but the only option he had was for a closeout section and he knew it. A close out section at Keramas is perfect for big lofts, as long as you can get enough speed before it shuts down. Filipe took off, pumped once, widened his stance and pumped again, and then he widened his stance even further, back foot slipping up against his tail-pad. A huge hit off the lip, and he was in the sky for a big and clean air reverse and the 9-pointer for one move. Filipe seemed to be enjoying himself so much in the zippering right-handers. They were tailor-made for his style of aerial ripping, and he sounded a horn that he was hungry for a win.

“I’m happy to land some perfect ones and get the big scores,” said Toledo of his air. Going forward, Toledo’s game is on the combo. “To be honest, I’m looking for a combo,” said Filipe of his approach to surfing Keramas. “A huge carve to a big air, or a big barrel to an air. A combination of moves is probably the best feeling in the world.”

Talking of which, current bright-yellow jersey-wearing John John also won his first heat with a tight and polished performance, including a perfectly landed air reverse. He’s loose and relaxed and not too fussed about anything right now. When quizzed by Rosy about the value of winning the seeding round, John John laughed it off, mentioning that he’s ‘still a little confused as to how it works. ’

Jordy Smith was also looking extremely motivated and confident. He also loves Keramas, and the wave suits his current regime of no compromise power surfing. Long rail turns; buckets of spray and emphatic finishes saw him finish solidly ahead of Sebastian Zietz and Jaddy Andre. 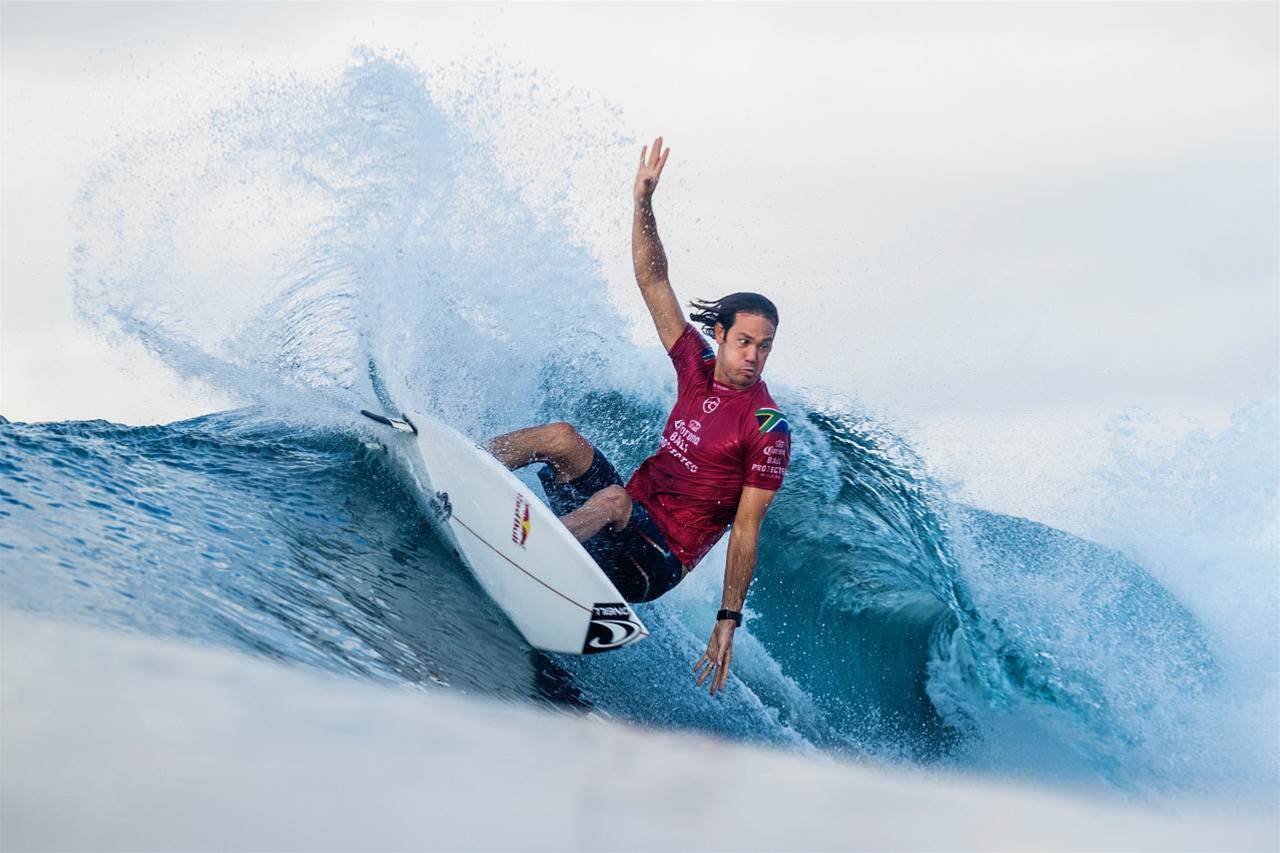 Young Indonesian wild card Rio Waida scored the shock upset of the day by winning his first round heat, deposing of Gabriel Medina and Deivid Silva in the process. He surfed fast and loose, and he had a great variety of moves under the belt, with the locals whooping their support from the beach. Young and energetic, the 18-year-old natural-footer’s surfing was reminiscent of Filipe, and he won the heat with relative ease. It wasn't a high scoring affair at all, and Medina’s heat total of 9.54 next to Rio’s 9.60 is indicative of a somewhat frustrating heat for Gabby. Not wishing to detract from Rio’s performance in any way, there were moments of dismal inconsistency in the line-up during the day, and this heat was one of them.

Over on the girl’s side Caroline Marks continues to blow up, along with Sally Fitzgibbons and Steph Gilmore. At the time of writing the girls are still battling it out in the fun, light onshore conditions.

The forecast for the waiting period shows much of the same conditions, with small waves, and glassy mornings easing into light onshore afternoons. The tides are not ideal, with the mornings coinciding with dropping tides, but conditions look good and contestable. The surfers who blow up in small but fast right-handers must all be smiling right now.