When Peter Mel stepped down as World Surf League Big Wave Tour Commissioner, there were many people out there who were questioning his move, and wondering what his reasons were.

How hard can it be?

Set the minimum readings you need for swell size, set your optimum readings for swell direction, wind direction, and tides, and wait for the weather maps to give you those readings. When they come, hit the Green Button. Surely it is that simple?

Saturday morning was booming. It was the real deal Nazaré, with a nasty double swell, swinging in from two directions into the notorious canyon, and Big Wave Commissioner elect Mike Parsons sent the boys out without qualms.

There were some incredible rides during the morning, with Lucas Chianca, the 22-year-old big wave maestro from Brazil, hooking into the morning bombs along with Hawaiian Billy Kemper in the first heat of the day. These two were the most hungry in among the huge, heaving Nazaré peaks, but everyone was frothing and having a go.

Heat two however, was a difficult affair, to put it mildly. Former Big Wave Commish Peter Mel stuck one ferocious left drop to get the highest score of the heat, but the wind started whistling menacingly though the line-up soon after, and the waves quickly became almost impossible to catch, with a disappointed Carlos Burle and Aaron Gold both getting a zero score to their names, and Tom Butler only managing a heat total of 3.14. The waves were deemed too treacherous, and Mike Parsons had little choice but to call it off for the day, hoping for better things to come. It was dangerous out there, the jetski rides were daunting, and there was even a flipped ski washed up on the shore, almost as if to vindicate Snips’ call.

Sunday morning unfortunately, wasn't as massive as expected. It was downright disappointing, but the show had to go on, and Snips charged forward. It was a difficult decision, but with a world title looming, the event needed a winner.

It was deemed only a Bronze Tier on the BWT Coefficient, giving the contest a value of 100%, and throwing out 10,000 points for first place.

*The BWT Coefficient works thus: the bigger the waves, the more points are available.

With smaller waves dominating, it was a fairly mundane day’s surfing, with the goal being to simply get a winner out of the mix, dish out some points, and to move on. That surfer was Lucas Chianca, who has been turning heads in the big wave stuff, and especially at Nazaré, for a while now.

The waves were unfortunately not big enough to be that fearful or impressive, so to up the ante, “Chumbo” decided to throw a massive floater into the mix in the final on his 10 foot gun, pulling it off for a 6,73 score for the one move, and edging him to victory.

There was more at stake though, with the Hawaiian duo of Billy Kemper and Kai Lenny streets ahead in the World Champion quest, with a big result in this event possibly being the decider of a world title should Mavericks not show by the end of the month. It was Kemper in second and Lenny in fourth (ahead of Natxo Gonzalez) to see Kemper stay in the lead for the world title with 27,140 points and Lenny in solid second with 24,829 points.

Current world champion Grant Baker made it to the final, but failed to get any of the bombs, nor the big scores to finish off in fifth place behind Lenny and ahead of Hawaiian Nathan Florence, brother to world champion John John.

As big wave contests go, it wasn't the best. The ocean did not deliver on the second day, and the decision was made to soldier on in the borderline conditions. It would be difficult to fault the decision – Nazaré is after all quite far away for most competitors, and there was no way that the WSL infrastructure could sit until the next swell.

The real issue with the event running is that without the mountainous walls of water synonymous with Nazaré dominating video feed and distributed imagery, there is little to pique the interest of the global mainstream. Without their interest, we unfortunately return to being a specialist category, within a niche sport, which must come with some disappointment to the best big wave riders in the world. 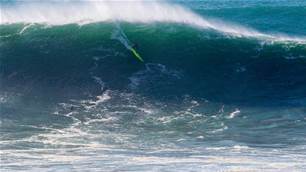 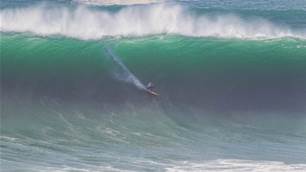 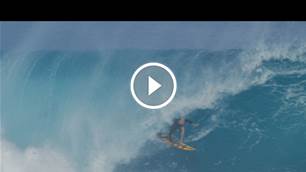