And why it’s better to have one than not

I was recently contacted by a writer from outside the surfing sphere, who was doing some research on Midget Farrelly. He was very enthusiastic about the project but suggested there was one problem. “I don’t think we can call him ‘Midget’ in the piece I’m doing.”

“Why not?’ I queried, explaining that was the name by which he was always fondly known in surfing circles.

The guy suggested that it was 2020 and that employing a nickname like Midget breached modern standards of political correctness. I could see where he was coming from but also felt that a time-honoured tradition was under threat.

I suggested to the writer you could refer to him exclusively as Bernard (Farrelly’s real name) but that the entire surfing community, and perhaps even his family, might see that as a little strange. Bernard 'Midget' Farrelly with Nat 'The Animal' Young  (left of frame), at Manly for the 1964 world championships.

The notion of a nickname is not unique to Australia or to surfing, however the practice of giving people alternative monikers has always been woven into the fabric of both cultures.

At their best, nicknames add colour, humour and character to the humdrum of day-to-day life. They should never be too cruel but occasionally they do serve as great levelers – a reminder that you are human and not infallible. Curiously, the most offensive scenario often arises when someone feels left out because they haven’t been given a nickname at all.

Hearing the writer’s politically correct stance on Midget Farrelly prompted me to think of some of the nicknames that have emerged in surfing, over the years. Most are associated with pro surfers, but others are more generally applied in different contexts and a couple relate quite specifically to lesser-known surfers. I’m sure you have a few classics to add to the list.

Jimmy Slade or just Jimmy: Nickname for Kelly Slater based on his character name from the TV series Bay Watch. Used frequently by Australian surfers in the 90s to get under Kelly’s skin a little. Kelly has also been known as The GOAT, the King and Smelly Skater.

Kelly like you have never seen him. Steamy, Jimmy Slade clip below.

The Dodgy Dentist: Nickname for Brazilian goofy-footer Wiggolly Dantas. The name says it all when you do a rough translation. 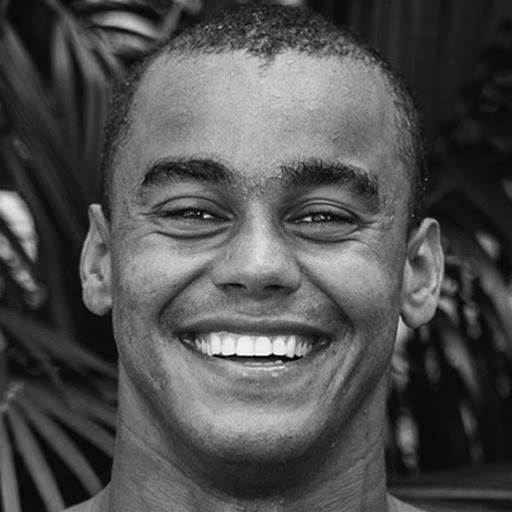 Laughing in the face of a name that makes him sound like he has teeth falling out – Wiggolly actually has a killer smile.

Loose Irons: Besides being one of the most naturally gifted individuals to ever pick up a surfboard, Bruce Irons is also known for his love of a good bender. Every destination on tour has a story of Bruce morphing into his alter-ego ‘Loose Irons’ and partying for several days straight. Bruce Irons, brilliant in the water, but by his own admission a little loose on land.

The Protractor: Used for surfers known to have particularly wide stances.

Fins First Ray: A local surfer from the eastern suburbs of Sydney who took off fins-first and spun around on every single wave. Famously pulled the trick at eight-foot Uluwatu, long before airs and tricks were a big thing. The Horror: Nickname occasionally used by the surf media for MR’s chief rival, Cheyne Horan. With his shock of blonde hair and prodigious talent, Horan was also known as ‘Kid Dynamo’ when he was a teenage sensation. In his teens, Cheyne Horan was also a member of the Coca-Cola skate team and was sometimes known as Kid Dynamo.

The Head: Bondi surfer Kevin Brennan was known for many things – surfing brilliance, petty theft, and having a big melon. Thus the name – the head. 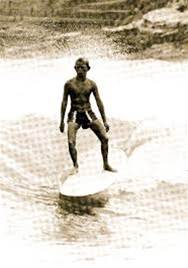 Pop-Out: Shark Island pioneer Gerry Manion developed this nickname after he became famous for literally popping out of the barrel. Gerry is still pulling his Houdini pop-out act on the points and reefs around Cronulla. According to an early 80s article by Jim Banks, Gerry was also a racing car driver when he wasn't weaving through bends at Shark Island. 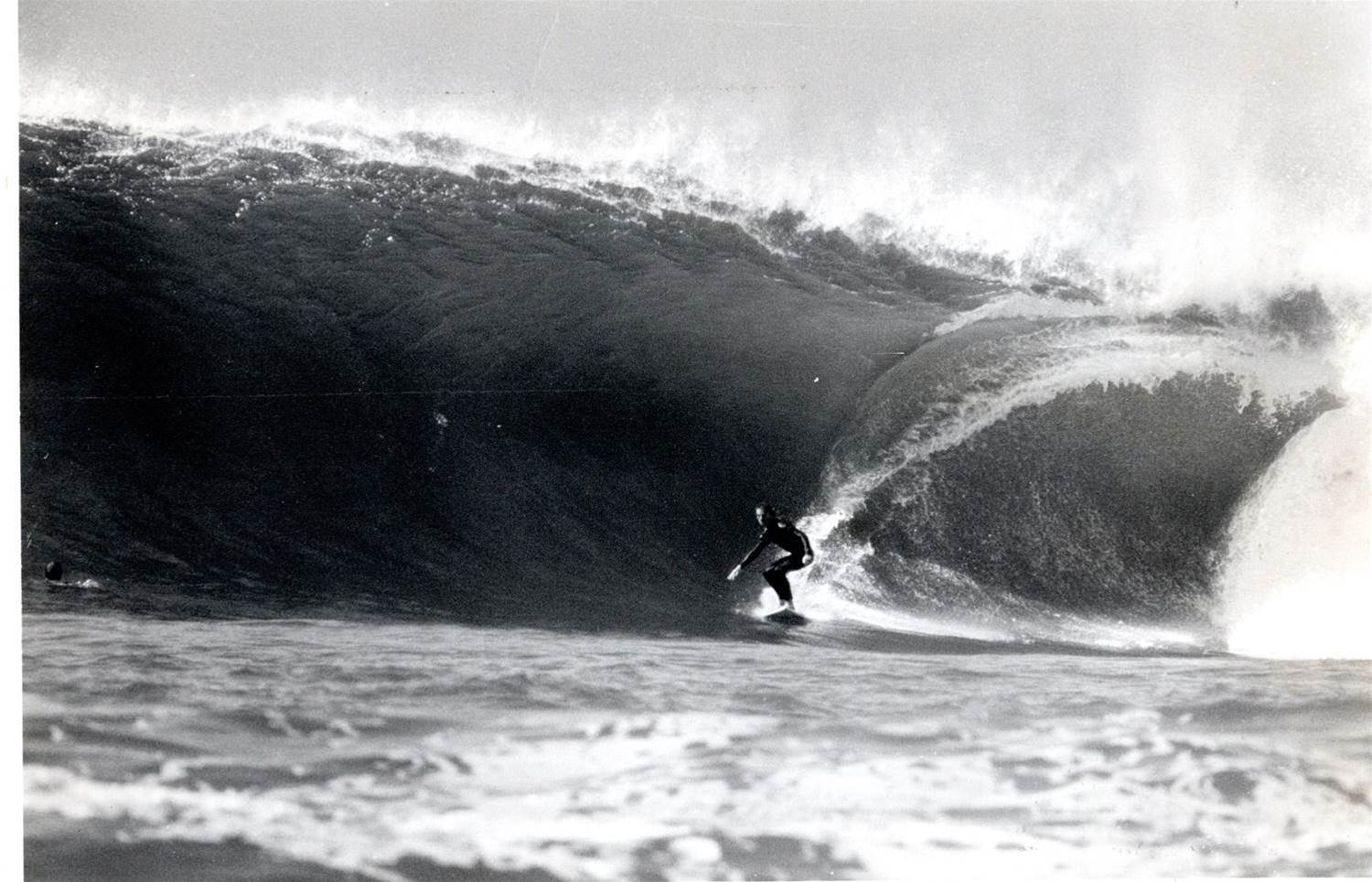 Sharky: Generally applied to anyone who has been involved in an incident with a shark. Becomes particularly relevant when said person has more than one encounter with a predator, which suggests there is something about their basic scent or aura which attracts the men in grey suits (a popular euphemism for sharks).

The Beard with Eyes: Current CT power-hound, Wade Carmichael, has developed a liking for facial hair and there is barely anything visible on his face beside his eyes. Name adapted from the phrase Roy and HG famously used for NSW, Rugby League forward, Glen Lazarus aka The Brick with Eyes. Wade aka 'The Beard with Eyes' has also been dubbed Alf because of his likeness to the popular TV puppet.

Dingo: Cooly Kid Dean Morrison has always gone by the nickname Dingo. To indicate his fondness for the tag when he released his bio movie a few years ago he titled it ‘A Dingo’s Tale’.

Rabbit: Wayne Bartholomew came to be known as Rabbit, Bugs and on occasion, Muhammad Bugs, the latter reflecting his flamboyant mix of ultra-competitiveness and showmanship. Wayne is now a budding politician and it will be interesting to see if the mainstream press embraces the nicknames.

Kong: Gary Elkerton’s famously on-again-off-again alter-ego throughout the 80s and 90s. The name was broadcast most prominently when Jack McCoy made his cult-classic, mini-feature Kong’s Island. In one of the final lines of the movie, the narrator bellows, ‘Is this the end of Kong?’ No Way!’ If you follow Gary on Instagram Kong is definitely back. We are still waiting for the promised sequel – ‘Son of Kong’

Tommy Gun: A Thompson sub-machine gun was designed for trench warfare in the First World War, but later became the go-to weapon for gangsters. It’s also a classic song by the Clash. The wepaon’s rep for high-powered destruction made it the perfect nickname for Tommy Carroll who was famous for hitting the lip and bottom-turning with a fully-loaded Tommy Gun in each thunderous thigh. Tommy Gun using his famed quads to help hoist another trophy above his head.

Mr X: Glen Winton always had a mysto aura and an unorthodox surfing approach that often involved experimentation with multi-finned boards. He was partial to a bit of glove/web wearing too. All this, along with his phenomenal surfing ability contributed to the vibe of Mr X.