Honest reflections after a few hot laps at Kirra and the Superbank.

While several planes never made it into Coolangatta airport on Friday, a friend and I were fortunate enough to have the kind of pilot who relished the challenge of landing an aircraft amidst wind gusts of up to 50km/hr. Admittedly the final descent did made you feel like a cocktail being shaken by a bodybuilding bartender, but we were certainly glad not to be amongst those who missed a day of surfing because of aviators without the Top Gun touch.

The first jump off at Snapper Rocks was surprisingly easy as the reverse sweep dragged us towards, soupy, wind-ripped eight-footers that detonated on the point and dared you to sneak a little closer and try your luck. As anyone who has surfed the Coolangatta Points knows this is the point at which you wave goodbye to whoever it was you paddled out with.  On this morning no one was really game to paddle too deep at Snapper as it copped the full brunt of Oma’s spin cycle and roared with atomic fury. As the reverse current sucked you in closer you had to work hard to paddle away from the foamy vortex or risk being the rock-splattered entertainment for those sipping beers on the balcony of the Rainbow Bay surf club. Most surfers were content with a few burgery, wide ones as a source of transport down to Greenmount where the real action begun. (A local later told me that he paddled big Snapper on a nine footer on the following morning).

With so much energy in the water, the section through Greenmount/Coolangatta was not at its groomed best, but there was definitely moments of bliss to be enjoyed. Perhaps the best tactic was to catch a capping surge of white-water out the back of Greenmount and hold on until the swell gripped the bank and was renovated from a foamy straight-hander into a steep, green wall the stretched almost all the way to Kirra. A rare empty one rifles down the line. Photo: Swilly

The section just before the big Groyne at Kirra, which is commonly known as Spot X, was throwing some of the heaviest barrels on the bank. Unfortunately, as I also found out, it was also the worst place to get caught inside on the entire stretch. Spot X buried me, rolled me, sucked the oxygen from lungs and then spanked me to shore in the shadow of the Groyne, leaving me uncertain as to whether or not I really wanted to know what lay beyond.

However, in a swell of this magnitude all currents ultimately lead to Kirra and after walking all the way back to Snapper I drifted down to surfing’s most mythologised wave. When I arrived at Kirra the offshore wind was so strong that I literally saw a fish jump and then get blown out to sea like a skimming stone.

The first thing that strikes you as you reach the Big Groyne that marks the gateway to Kirra is that you are dealing with a different beast. The wave becomes dramatically steeper and moves with considerably more velocity. Watching from behind, the wave rifled down the point shooting intimidating geysers of spray out the back. It was only the hoots from down the line that confirmed that the last person who took off actually held a line through the bending violence.

The perfect still frame or the thirty second clip does not do justice to the variables and quantity of effort associated with getting a single ride at Kirra. At any moment you must contend with a throng of humans trying to catch the same wave as you, a roaring sweep that rips you away from the zone, a fast-jacking take-off and the hissing spray, which means you have to huck over the ledge blind. Not every wave is perfect either, so even if you win the battle to hitch a ride on the freight train it may not spin and curl as you expect. Once you take a wave – good or bad – it requires the paddle arms of an iron man to get back to the lineup. Kirra often gives you only one or two shots at a wave before it flushes you down past Pizza Hut for a Supreme run around. At its cruellest it will push you to the beach down at Tugun – waveless.  The harsh realities of Kirra must be married with the idealised imaginings you have conjured over time. Given the sufferings that must be born, a good wave at Kirra is as much a conquest as anything else. You came, you paddled, you hustled, and you got one.

My arrival on the hallowed stretch coincided with the presence of a top-flight crew that included Joel Parkinson, Mick Fanning, Bede Durbidge, Nick Vasicek, Jack Freestone, Mitch Parkinson, Brent Dorrignton and Mitch Crews.  A different aura surrounds this elite crew when Kirra is turning on. You are very conscious of the fact that you are in the company of apex wave predators who are in full-blown, hunting mode. They are aware that their skill level enables them to take off deeper, travel faster and navigate the barrel better, but even they can be humbled by the merciless sweep and once in the lineup they want a wave fast.

Watching Parko swoop under the lip on an ultra-deep double up and traverse two long, hollow sections was one of the better memories – a live demonstration of how critically the wave can be ridden.

As always every set and every moment had its own nuanced interpretation and the hierarchy was in a state of constant flux. For the gifted, it’s no doubt painful to see perfect waves wiped out on and wasted when you are aware that you could have threaded a six second barrel on the same swell.

In such a setting, where everyone is consumed by self-centred wave lust, some of the better surfers are certainly ruthless in their approach. Did CT surfers burn other CT level surfers – yep.  Were the other surf crimes justified on the basis of superior skill, local status and the cry of ‘ This is my Job’? That’s a hot debate.

Most of the pros were able to maximise their wave count courtesy of lifts back to the lineup on skis. This of course eliminates the problem of paddling or running around and means you can hit the lineup with fresh limbs. Did it feel like an unfair advantage? Yes. Would I have accepted a lift out if someone offered me one? Bloody Oath. Down the beach several skis were taking advantage of the eight-foot sets, which roared wide into the Bay. No one was paddling down here and it was fair game for the tow-assisted, lucky few who were whipped into hurtling caverns beyond the gaze of the spectating masses and the scopes of the photogs on the Groyne at Kirra. MF and a brigade of ocean steeds. Photo: swilly

Eventually I scored a mediocre, wide one with a foamy head dip section and kicked off with a degree of satisfaction. You try to remind yourself how much fun it is to simply be catapulted down the line on a coil that seems to defy all laws of physics. Meditating on small glories is a necessary means of preserving your sanity when you know others have been behind the curtain for double figure lengths of time.

It is down the line that Kirra simultaneously tortures you and really puts you under its spell. From side on the bend and chuck of the lip is truly rapturous. If you are not watching someone else screaming through a roomy barrel you are mind-surfing an empty tube as it warps and flexes through multiple sections like a portal to heaven. You feel privileged to witness such a thing from a side-on view but it is also at this point that your brain screams, ‘I must have one!’

The main problem is that by the time you are admiring Kirra from down the line you are probably too far-gone no matter how hard, you strain against the sweep desperately to get back to the zone. Some have bigger boards or enjoy success by paddling way out and around, where the sideways pull loses some of its effect. If you are really lucky you will pick up a wave on the wider bank, but most of the time once you have been flushed down the line there is little left to do but point your board towards the beach and ride the white-water in. The final, demoralising punishment (particularly if you didn’t get a decent one) is the paddle across the long stretch of dead water that separates you from the shoreline. However, by the time you trudge around the path, hypnotised by the sight of surfers disappearing behind crystalline lips on almost every wave, something stirs inside and you convince yourself it’s worth another shot. A long barrel is the visualised objective, but exhaustion the most likely ends.

The next day we were in Byron, jostling for zippering, two- three foot rights and wrong-way lefts at the main beach. The crowd was still thick, but mellower in temperament and the choice of craft more diversified as narrow spears made way for longboards, twins and regulation shortboards. The best surfer I saw was a longboarder who happily chatted about the waves between dexterous strolls up and down his buoyant slider. Riding different boards wasn’t a source of division, just an accepted part of the culture.  It was all fun and playful and better wave quotas were achieved and even the odd little barrel was ridden. Down the beach, where the swell straightened into a whomping shorebreak, Owen Wright and Connor O’Leary sought relief from the trials of Kirra and traded a few tee-pee tubes in the morning. 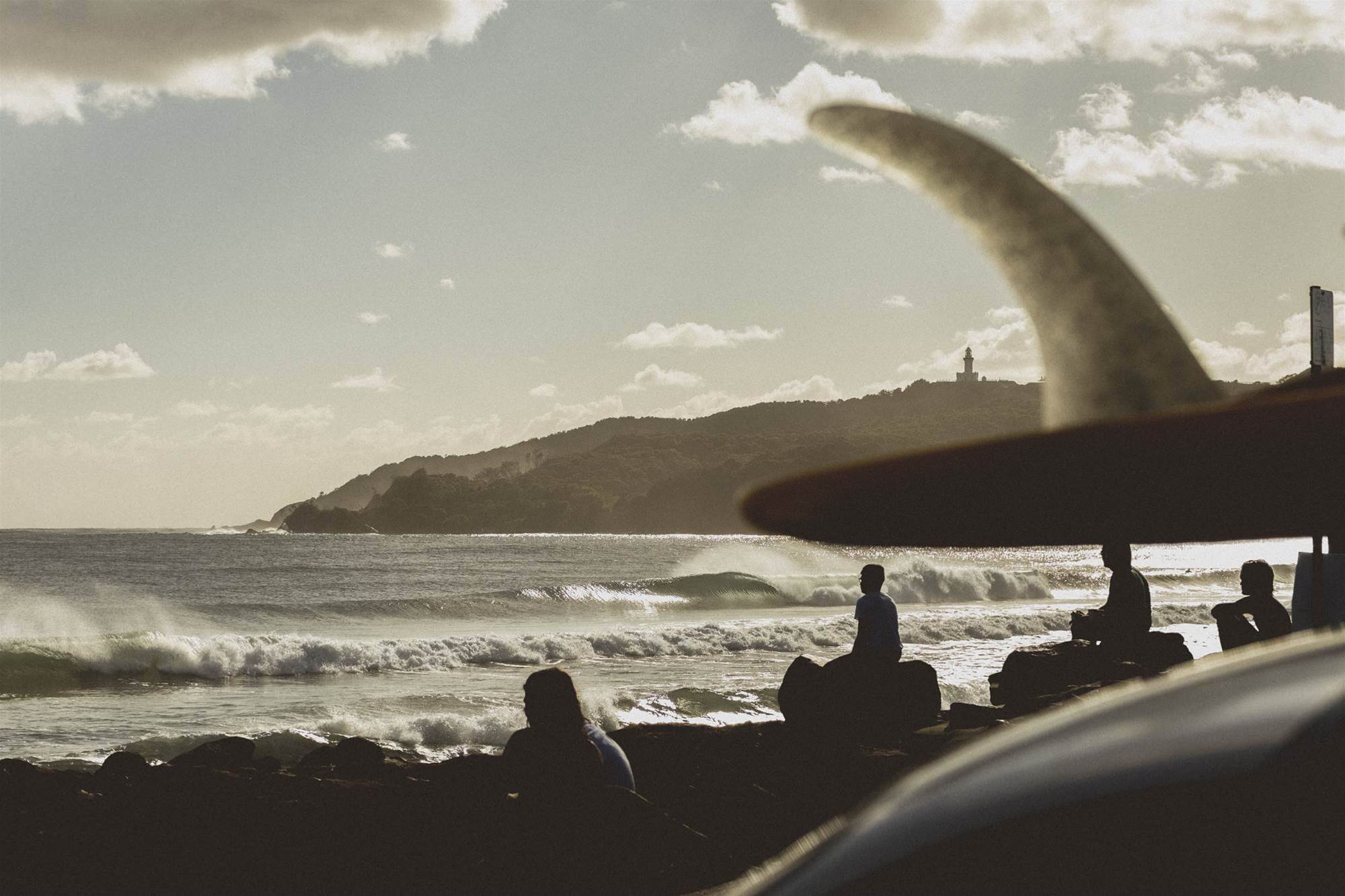 As surfers and bodysurfers of all ages enjoyed Oma’s fringe benefits, thoughts of the recent shark attack seemed erased, even if the water clarity was poor after the rain. Perhaps that’s the problem with Byron, it lulls you into a dreamy state of Nirvana where it feels like nothing bad can ever happen.

Maybe it would have been more rational to stay in Byron and enjoy the eclectic, surftopian vibe, ride different boards and get involved in the surf festival that was happening. However by Sunday morning something more powerful was already dragging us back North. Kirra had cast her dark-tube spell on us and Oma was still spinning. It was probably a fool’s errand, but the pull was too hard to resist. We had to give it a try – just one of those good ones would make it all worthwhile – right? 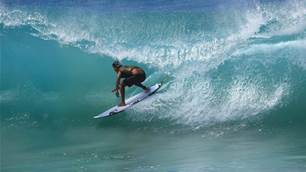 XL Oma at The Alley