The Louisiana oil spill is likely to take over as America's biggest environmental catastrophe (see ya Exxon Valdez). 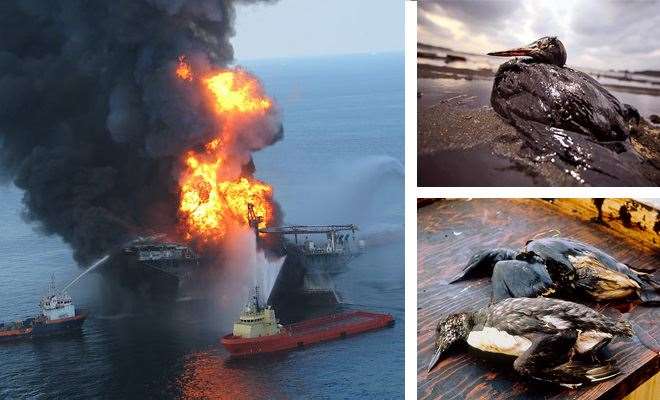 The needle and the damage done...

The Louisiana oil spill is likely to take over the inglorious crown as America's biggest environmental catastrophe (see ya Exxon Valdez). The fall out has already resulted in an environmental and political cluster fuck on a supersize, American scale. But the ramifications will be felt around the globe.

Until the hole drilled by the Deepwater Horizon is plugged it will continue to gush thousands of barrels of oil into the ocean every day. That's a big problem for the sea life and coastal fringe in the Gulf Of Mexico and for the economy of Louisiana, home of the most productive fishing industry in the lower 48 states. Plugging up the underwater geyser has been compared to “performing open heart surgery, 1500 meters under water, in the dark, with a robot controlled submarine.”

Some environmentalists are already pointing to an upside. A disaster of this size is terrible PR for the oil industry and may kill off the current plans to expand offshore drilling near the American coastline. Likewise, in Australia, it will be easier to make a case that drilling for oil off the South West, one of our most beautiful, not to mention wave-saturated, coastlines is a terrible idea.

It probably is but consider the larger problem...

Time magazine journalist Bryan Walsh suggests that simplifying the issue into bumper sticker slogans (“drill here, drill now” Vs “Drill nowhere, drill never”) is narrow-minded and ultimately futile. He's talking about American but it's applicable to Australia. And he makes a good point.

Not only are we totally reliant on oil at the moment, says Walsh, but “as the population expands and the policy decisions and technological innovations needed to make the switch to green, renewable energy sources lag, thirst for oil is only going to grow.” Even if governments rushed an adequate amount into renewable energy right now (which they won't because they are broke) we would still need lots more oil unless we want the world to descend into anarchy.

Walsh gives an example of an oil spill in 1969 off the coast of California which triggered enough public and political support to ban any new rigs off the Pacific and Atlantic coasts of America. A victory perhaps but Walsh says it only led to a massive case of NIMBYism (not in my backyard). Instead of risking oil spills off its own coastline America outsourced it offshoring to countries with non-existent environmental standards. Nigeria, for example, which has spills equal to that of the Exxon Valdez every year.

In other words people want cheap oil and they care about oil spills... but not if they happen a long way away.

What does Walsh see as the solution to our dependence on an energy source that “fouls the planet, enriches petro-dictators, destabilizes economies and is running out”? Great Big New Taxes on the oil industry for a start. Drill for more oil but tax it (he suggests $2 a barrel) and use the money to fund alternative power. In addition, alternative energy projects need to be fast-tracked and people need to be educated about the extend of the problem and accept that “given the scale of the coming energy demand - coupled with the need to reduce carbon emissions - NIMBY is dead.”