Will Australia reclaim its title as the top surfing nation, at the Olympics.

While the short-term focus may be on the Rip Curl Classic at Narrabeen the Tokyo Olympics are looming. (kick-off July 23) Whatever your views on the inclusion of surfing as a sport it’s happening and the marketing drive for the Australian team is kicking into overdrive.

The Australians have announced a team they claim will be ‘deadly in the water’. Steph Gilmore, Sally Fitzgibbons, Julian Wilson and Owen Wright will represent Australia in the shortboard division. It seems no Australian Olympic team is complete without a nickname. The Kookaburras, (men’s hockey) The Matildas (women’s soccer) the Rollers (men’s wheelchair basketball) will now be joined by the surfing team The Irukandjis – named after the Irukandji jellyfish – an extremely venomous species of jellyfish that inhabit Australian marine waters.

Steph Gilmore, who led the team discussion around a name, indicated she really wanted a moniker that carried multiple, powerful messages. “I really wanted us to find an awesome name for the team that incorporated the Indigenous culture of Australia. Irukandji perfectly suits our team as we try our best to be ‘deadly in the water’ against our rivals in the Tokyo Olympics.” 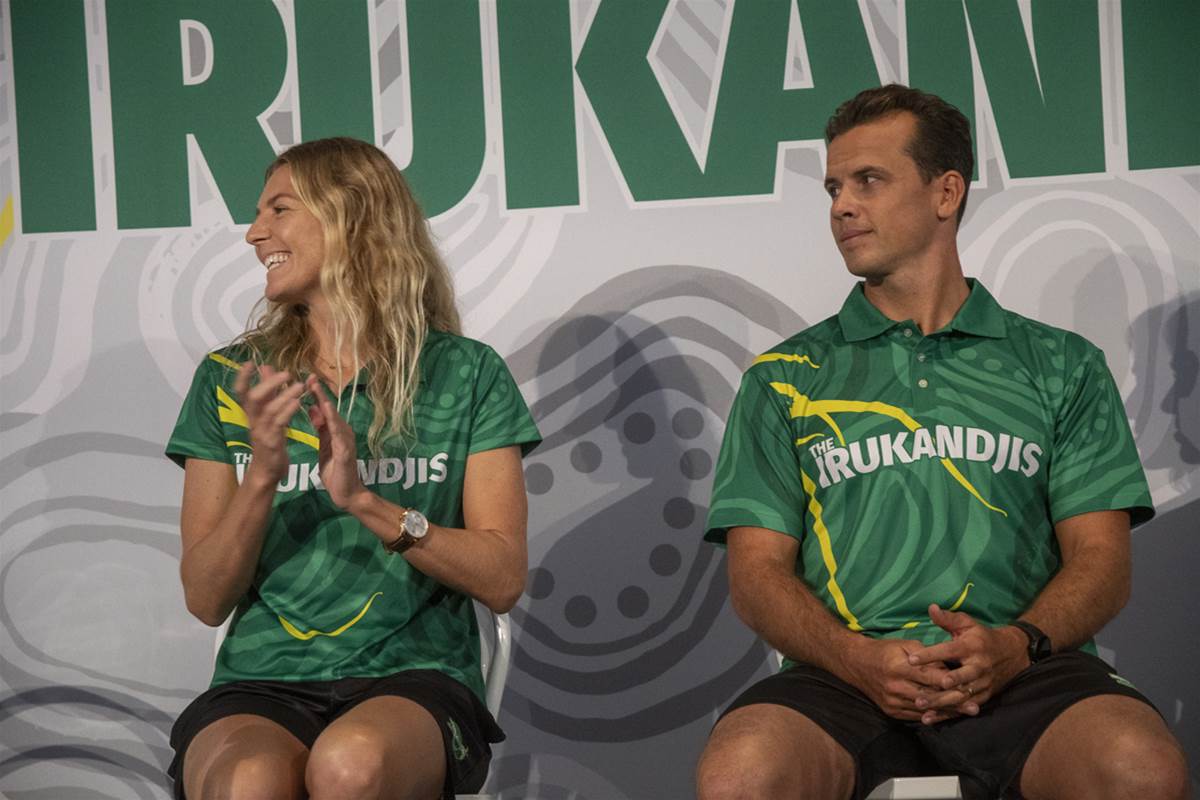 Steph Gilmore and Julian Wilson will lead the charge for gold in the women's and men's divisions.

The Irukandjis name was generously gifted to Surfing Australia by the local Yirrganydji people of North Queensland, driven by the efforts of Indigenous athlete and former World Tour surfer, Soli Bailey. The team branding and uniforms were developed in collaboration with BWM Dentsu and Indigenous artist Jasmine Craciun, who derived inspiration from her ancestors, the Barkindji people.

While the Irukandjis certainly have plenty of sting they will have to be deadly serious if they want to overcome their main rivals from the USA (Kolohe Andino, Carissa Moore, Caroline Marks and John John Florence). Meanwhile, the Brazilian men's team has the formidable pairing of Gabriel Medina and Italo Ferreira chasing gold, and the French team boasts the heavy-hitting duo of Michel Bourez and Jeremy Flores. New Zealand’s Billy Stairmand is also a dark horse in the men’s field and was confident about his chances when Tracks ran into him at Bondi recently.

Even if you are cynical about surfing as an Olympic sport, it will be hard not to turn on the telly and cast a curious eye towards the Australians competing in Japan. For many, a gold medal remains sport’s greatest prize. While the Australian women remain clear title contenders in the WSL, the Australian men have been missing from that ‘conversation’ in recent years. The Olympics is a chance to put Australia back on top as a surfing nation again. If we do dominate then the non-surfing masses will view us as the top surfing nation, as they are more likely to tune into the Olympics than a WSL webcast.

In any case, I can’t wait for the throw from the weightlifting to the surfing. Clean and jerks to cutbacks and Irukandjis. Surfing will be right in the mix.