Supers is hard to surf well, even harder on your backhand.

When Occy stormed onto the scene in 1984, no one knew how to surf Supers on their backhands. Of course there were surfers who did what they thought was great performance surfing out there on their backhand, but until Occy came along no one actually understood.

His performance was the one that blew everyone out of the water and that made all goofy-footers recalibrate. Most of them had complained that Supers was too fast to surf effectively on your backhand, and that there was no real time to put your moves in. When Occy surfed there he was going so fast that it appeared as if the waves had slowed down for him. He was getting so far ahead of the wave and outrunning fast sections with such ease it was as if the dynamics of the wave speed had changed. There have been other goofy-footers over the years who might not have been the most successful, but who have always stood out for various reasons at Supertubes. Let’s have a look.

Wiggolly Dantas is full-bore. He does not slow down and he does not know how to nurse a turn. It’s either square off-the-bottom and hard off-the-top, or it’s not at all. He might not have the best style on him – function above fashion – but he does throw it all on the line, and actually attracts a crowd. These days there are enough lesser surfers in the mix, particularly in the early rounds, to allow for plenty of time to disappear from the contest site to have a meal, a beer or a pee without being worried that you might miss something spectacular, but no one leaves the beach when Wiggolly paddles out at Supers. 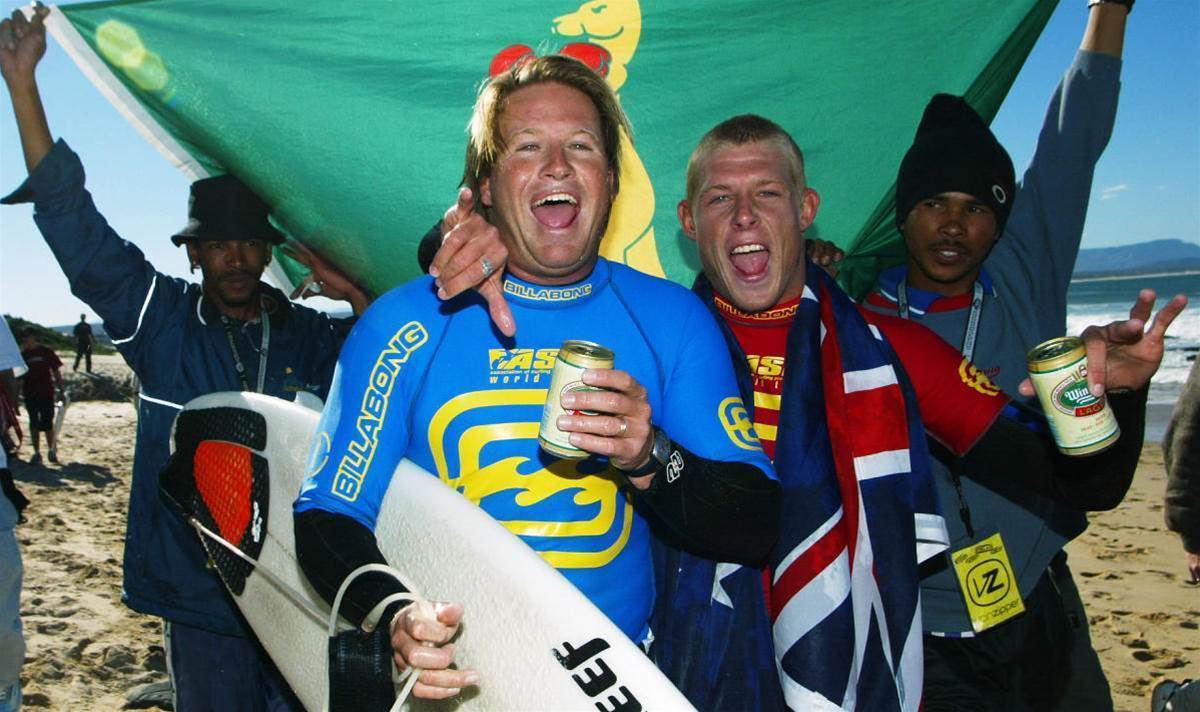 Mick Lowe was such a wonderful surfer, partially for his effective and powerful surfing, but also for his genial mannerisms and ease with which he made friends anywhere in the world. All he needed was a couple of beers and a place to hang or watch some rugby, and he was the happiest dude around. When he blew minds in 2002 it was for a number of reasons. Firstly, and I guess the most obvious, was that he was already starting to form the ‘keg-on-legs’ physique, and really didn't seem too fazed by it. Secondly despite this bodily shape, he was the most powerful backhand surfer at JBay that year, surfing with a minimalistic style that saw him waste no energy nor waste any time fucking around between moves. He was either coming hard off the bottom or cracking the lip, but he wasn't doing half-turns or check–turns or any of that crap. He was stoked with the result that year – runner up to Taj - and then headed off to the bar.

Bobby Martinez really was a great surfer, with power and style, and even adopted a knock-kneed positional style when the conditions were tiny and he needed to loosen up a little. He was an excellent part of the Championship Tour and his demise was a total bummer and a crap way to end a career. No judgments, no blame except for himself, but the tour would have been a better place with him on it when he was still in his prime. Talking of which, his backhand barrel in 2008 at Supers cannot be forgotten, and cannot be unseen. He pulled into a big close-out section, with plenty of speed, straight into the north-west devil wind blowing up the wave face. He traveled and traveled, but we all knew he wasn't coming out. Until that same devil wind gave an extra hard puff and simply blew that tube wide open, allowing him a clean exit and for commentator and 1977 World Champion Shaun Tomson to claim “the best backhand barrel I have ever seen at Supertubes.” It was a unanimous 10-point ride.

Nathan Hedge is another goofy who knew how to find the rhythm at Supertubes. He showed it with a runner-up position in 2004 to Andy Irons, but it was his performance in 2012 that saw him being awarded a 10-point ride. That year the event was downgraded to the Billabong Pro WQS 6-star, and it had a full contingent of 144 surfers entered. The waves fired for the whole time except the last day, and on the day before the contest started Royden Bryson snapped his leg at Impossibles, but Hedgy stole the show with this ride.

When I interviewed him afterwards on the beach, and asked him to talk me through the wave, he said, ‘ I cant really remember it mate, sorry.” Funny that, as I think it is one of the most memorable waves from all the years of JBay competitions because it is a perfect example of an athlete in flow, working totally on instinct, and letting his conditioning and muscle-memory take over.

So, which goofy-footers have I forgotten?